#GivingTuesday – Join the PC(USA) in responding to a world in need! Give now!
Make A Donation Click Here >
Home › John Glenn, Presbyterian Ruling Elder and national icon, dies at age 95

Faith permeated his life, work and inspiration of others 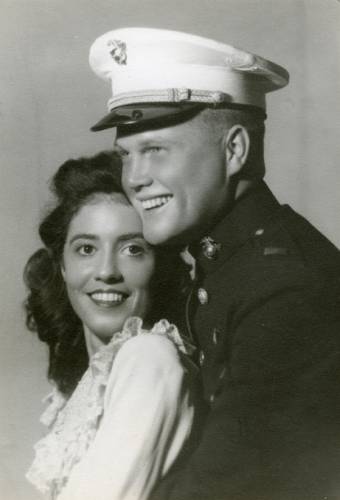 LOUISVILLE – John H. Glenn, Jr., best known as the first American to orbit the earth, died yesterday at the Ohio State University Wexner Medical Center in Columbus at the age of 95. What is less known about Glenn is his lifelong membership in the Presbyterian Church and the faith that influenced his life’s work.

Born July 18, 1921, in Cambridge, Ohio, Glenn was raised in nearby New Concord by his parents John Herschel and Clara, attending Westminster Presbyterian Church with his family. His mother was the first female Ruling Elder ordained in the congregation where his father was also a Ruling Elder.

After completing high school, Glenn attended Presbyterian-related Muskingum College (now University) where he studied engineering. Although he did not complete the coursework required for the Bachelor of Science degree, the school granted Glenn an honorary Doctor of Science degree in 1961. Glenn and his high school sweetheart Annie Castor were married at College Drive Presbyterian Church—the church of Annie’s family, also in New Concord—on April 6, 1943.

Glenn went on to be a test pilot for the Marine Corps and flew 59 combat missions in World War II. During the Korean War he flew 90 missions, roughly half of them alongside baseball great Ted Williams. Selected as an astronaut by the newly formed NASA in 1959, he manned the first American orbital mission in 1962 aboard the Freedom 7 space capsule, orbiting the earth three times in the nearly five-hour mission.

Following his retirement from NASA and the Marine Corps as a colonel, Glenn became a U.S. Senator for the state of Ohio, representing the state from 1974 until 1999. During this time in Washington D.C. he attended National Presbyterian Church, where he served on the Session. In 1998, at the age of 77, Glenn once again returned to space, this time as a payload specialist aboard Space Shuttle Discovery (flight STS-95), which made him the oldest person ever to have flown in space. 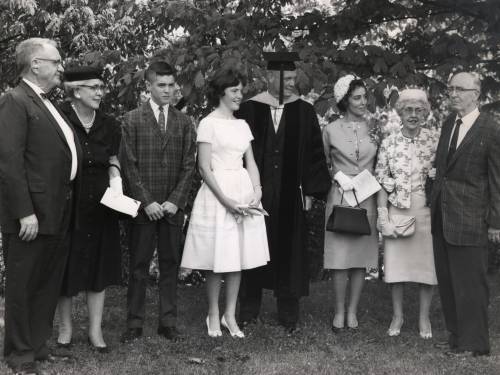 A letter from PC(USA) officials Clifton Kirkpatrick, Douglas Oldenburg and John Detterick on October 23, 1998—prior to Glenn’s Space Shuttle flight—began “To Elder John Glenn, Our Brother in Christ.” The officials relayed “prayers and gratitude on behalf of the Presbyterian Church (U.S.A.) as you continue your public service through research in space.”

The letter concluded, “John, your church is grateful for the service you continue to share with millions of Americans and citizens of the world.  May the peace of Jesus Christ be with you and your colleagues on this flight. Prayers from those of us in the Presbyterian Church (U.S.A.) will certainly be there.”

Relying upon his faith, Glenn expressed wonder about creation during his Space Shuttle mission. “Looking at the Earth from this vantage point, looking at this kind of creation and to not believe in God, to me, is impossible. To see (Earth) laid out like that only strengthens my beliefs,” he said.

Also a strong proponent of scientific discovery, Glenn saw no conflict between his faith and evolutionary science. “I don’t see that I’m any less religious by the fact that I can appreciate the fact that science just records that we change with evolution and time, and that’s a fact,” he said in an interview with the Associated Press last year. “It doesn’t mean it’s less wondrous and it doesn’t mean that there can’t be some power greater than any of us that has been behind and is behind whatever is going on.” 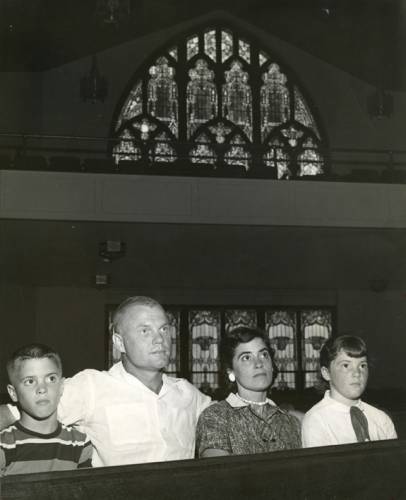 Fellow astronaut and Presbyterian Ruling Elder, Buzz Aldrin, also displayed his faith throughout his NASA career. One of the first things he did upon the first lunar landing mission was to serve himself Communion. “In the one-sixth gravity of the moon, the wine slowly curled and gracefully came up the side of the cup,” he said of the event.

“They never forgot New Concord,” said George St. Clair, a Ruling Elder at Westminster. “They would come back from time to time. The last time they worshiped at our church was 7-8 years ago following a banquet the town had for them. They’ve always remembered our church financially, and we’ve always been proud of them at Westminster.”

St. Clair knew Glenn’s parents the best, meeting John and Annie several times when they visited their childhood hometown with their children. “They were a very nice couple who were always very friendly and liked to chat,” said St. Clair. “In fact they would sometimes have trouble getting John to move on because he was busy talking to someone and they wanted him somewhere else. He was just that kind of person who liked to talk and be around people.”

Speaking from Glenn’s boyhood home, which is now a museum, St. Clair said, “He was really a hometown person and all of New Concord is very proud.”

Ohio Governor John R. Kasich called Glenn “Ohio’s ultimate hometown hero” in a statement yesterday, adding, “His passing today is an occasion for all of us to grieve. As we bow our heads and share our grief with his beloved wife, Annie, we must also turn to the skies, to salute his remarkable journeys and his long years of service to our state and nation… Godspeed, John Glenn!”

John H. Glenn, Jr. is survived by Annie, his wife of 73 years, their children John David and Carolyn Ann, and two grandchildren. Glenn will be interred at Arlington National Cemetery after lying in state at the Ohio Statehouse and a memorial service at Mershon Auditorium at The Ohio State University.