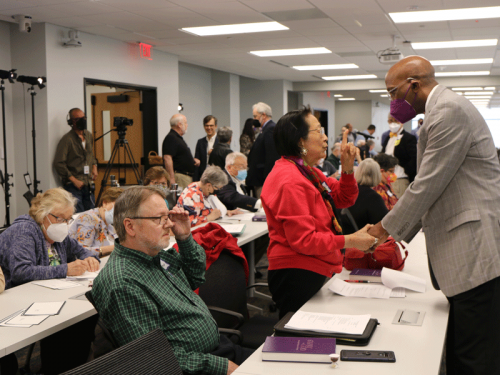 The Rev. Dr. J. Herbert Nelson, II, Stated Clerk of the General Assembly of the Presbyterian Church (U.S.A.), greets presbyters during Monday’s meeting of Mid-Kentucky Presbytery in the new conference room at the Presbyterian Center. (Photo by Randy Hobson)

LOUISVILLE — It fell to Mid-Kentucky Presbytery to set sail on a shakedown cruise Monday with the just-out-of-the-box technology that will be used during the hybrid 225th General Assembly, which begins June 18.

For the most part, the technology — and the large conference room christened by the local presbytery — performed admirably.

“There are some things we need to give the construction crew time to complete,” including lighting and microphone enhancements, said Julia Henderson, who manages General Assembly Planning and Business Management for the Office of the General Assembly. “We’ve had 100 people working on different aspects to lead us to this day. We’ll use the time we have to fine tune our plans going into the General Assembly.”

Henderson and members of the production crew ran Monday’s meeting from the production studio that’s part of the $2.4 million renovation of the Presbyterian Center that added the conference center. On Tuesday, PC(USA) national staff will gather in person and online to dedicate the new space and hear more about plans for hosting the 225th General Assembly, during which committees will meet in person and plenary sessions will occur online.

One key room was not in use Monday. The cyclorama, also known as a cyc wall, is a small room where a small number of key figures — including the co-moderator on duty, the Stated Clerk, the parliamentarian and a handful of others — will spend the bulk of the Assembly. The cyc wall is among the facilities still requiring some finishing touches. In the world of video production, cyc walls help make the background disappear, opening up possibilities with lighting, for example. 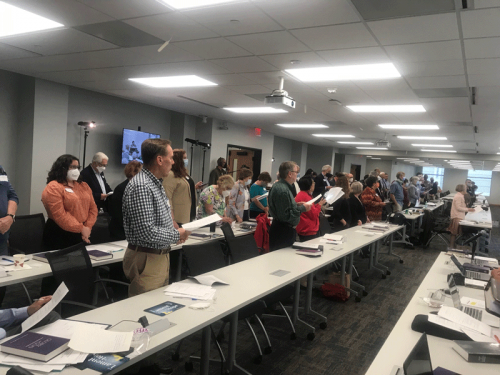 During Monday’s presbytery meeting, those in attendance were divided between in-person and online presbyters. Online voting took place through a survey as particular items came up for discussion. For GA commissioners, voting will take place via pc-biz.org, a system developed by the PC(USA) and marketed to other denominations and organizations who have also found it helpful. It’ll also be used by Presbyterians across the nation who wish to stay on top of GA business from the comfort of their own homes.

“We are thankful we can offer this to our friends right down the road rather than waiting for General Assembly to see if it’s going to work or not,” the Rev. Dr. J. Herbert Nelson, II, Stated Clerk of the General Assembly of the PC(USA), told those gathered on Monday. “Thank you for being the guinea pig,” he said with a smile. “We hope it will work. We think it will.”

“We do all of this because of the Stated Clerk and his vision. He encouraged us and said there will be mistakes, but we’ll keep learning and be innovative,” Henderson said. “We’ve been able to share [the technology] with others, and we are applying what we’ve learned to this General Assembly.”

Henderson said a strength of the upcoming assembly will be that committee members will have the chance to work together in person and become very familiar with PC-Biz before having to use it remotely from home. That will also familiarize them with the speaker recognition system that’ll be used to help the co-moderators determine who gets to speak and when.

“We are covering the work of two General Assemblies in one,” Henderson said, owing to the fact that most of the business from the 224th General Assembly (2020), which was held entirely online, was referred to the 225th edition. “In order to do that, we have more committees, with fewer people on each committee. That should give commissioners more opportunity to get to know one another” and to help staff and volunteers work out technology problems before plenary sessions begin in earnest on July 5.

“I am so excited. I really am,” Henderson said. “Because the Stated Clerk put this vision out there and he is so inspirational, it makes us proud to deliver a product we believe in.”

It’s not a presbytery meeting without worship

The Rev. Gregory Bentley, Co-Moderator of the 224th General Assembly, greeted presbyters via Zoom with his signature enthusiasm: “I am elephant excited and platypus pleased to bring you Jesus joy,” Bentley said. “You get to be the guinea pigs for getting this thing right. Congratulations!” 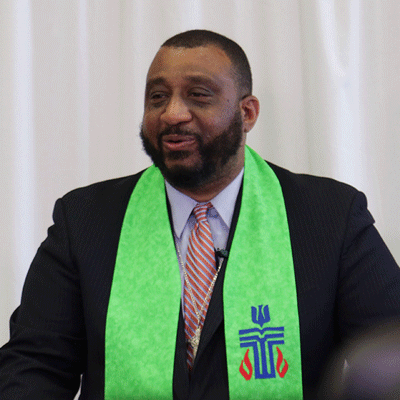 The Rev. Gregory Bentley, Co-Moderator of the 224th General Assembly (2020), preached during worship on Monday. (Photo by Randy Hobson)

Bentley, the pastor of Fellowship Presbyterian Church in Huntsville, Alabama, used Psalm 23, traditionally attributed to David, as his preaching text. He said he could envision David on his porch swing “reflecting on the goodness of the Lord.” David “knew something about shepherding,” Bentley reminded those in worship. When describing the Lord, “he could have used the term ‘king’ or ‘general,’ but he didn’t. He used ‘shepherd,’” people who “weren’t highly regarded. They were seen as uncouth, backward country bumpkins. They were smelly like the sheep they tended. Yet the king of Israel referred to God as ‘my shepherd.’”

The shepherd employs “a rod of protection and a staff of correction,” Bentley noted, and likewise “God has benefits and responsibilities for the church.” The Psalm 23 phrase “in the presence of my enemies” made Bentley think of the O’Jays’ song “Back Stabbers.”

“Maybe you have been around holy and sanctified people all your life,” Bentley said, “but I have had to deal with this in my ministry.”

And as for the “surely goodness and mercy” conclusion to this most popular of the psalms, “David knows God has been good and faithful in the past and will be in the future,” Bentley said. “Beloved, keep your hand in God’s hand. Lean not to our own understanding, and the Good Shepherd will direct our paths. Amen, and God bless you.”