Make A Donation Click Here >
Home › ‘Into the Light: Finding Hope Through Prayers of Lament’ 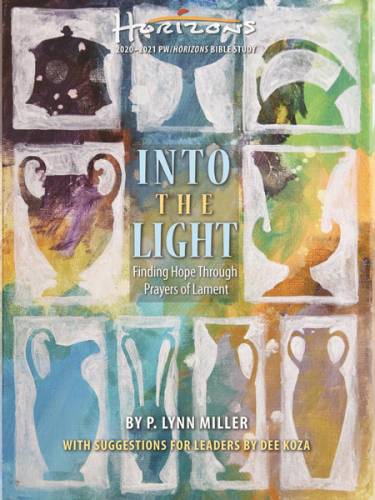 LOUISVILLE — When author and artist P. Lynn Miller proposed the theme of “lament” to the national Bible Study Committee of Presbyterian Women four years ago, no one had any idea how timely the topic would be now.

Because COVID-19 has kept Presbyterian Women/Horizons from introducing its 2020–21 nine-lesson Bible study in person at synod and presbytery gatherings, “Into the Light: Finding Hope Through Prayers of Lament,” is being introduced by Miller through Zoom webinars this month, hosted by JyungIn “Jenny” Lee and Susan Jackson Dowd, national moderator and executive director of Presbyterian Women, respectively.

“I think, in our culture, we often hesitate to lament, and when we do, we are eager and sometimes hasty to get to happiness and hope too quickly,” Lee said. “It will be a good practice of faith to be lamenting together, especially in supportive settings like PW circles.” She added, “Lamenting is not the same as complaining. At the moment, there are so many things going on in this nation that we feel helpless about. We may feel hopeless because we feel helpless.”

Lee hopes that small group study of “Into the Light” will provide opportunities to listen and process unspoken groans as participants sit together with heartfelt laments in the presence of God, while finding hope again.

“One of the foundational points of the study is that, in Scripture, lament usually leads to hope,” writes Miller, a pastor in the Presbyterian Church (U.S.A.). “After crying out to God, the one who laments remembers God. And while that doesn’t fix things in the moment — the injustice, the loss still exists — the lamenter is strengthened to face the world and to hope.”

“For us as Christians, hope is not just an emotional response or an attitude of pie in the sky,” Miller said. “Hope implies movement: both God’s inherent movement toward justice and our movement toward God. Recovering lament may be one of the church’s most timely gifts to the world. Lament is a proper theological response to the difficult situations of our world.”

When Miller shared with others in her circle of Presbyterian Women at Fondren Presbyterian Church in Jackson, Mississippi, that she would be writing a PW Bible study on the topic of lament, she remembers they all stared at her blankly. Then one brave soul said, “So, essentially we’re going to be depressed for an entire year. Thanks, Lynn.”

Certainly, this study topic grew out of sadness, Miller said, explaining that her Christmas Eve 2015 was spent getting her dad set up for home hospice. He died in January 2016. Miller’s mom had to have two operations, one of which the family had been told would likely find ovarian cancer. It did not, but even as they celebrated that hopeful news, Miller’s 30-year-old niece was diagnosed with breast cancer. That was also the year the family’s beloved dog, Sandy, had to be euthanized.

“What do you say to God in years like that?” Miller asked.

The biblical answer is that you lament, she said. “I think if you ask most people, they would equate ‘lament’ and ‘grief.’ Those things share some qualities, but they aren’t exactly the same thing.”

The purpose of lament, at its heart, is really about turning to God, crying out to God in prayer and finding hope, Miller explained.

“Just look at the world in which we live today. What do we do about those things in our world that cannot possibly be aligned with God’s will and purpose for this world? Rather than spending our energy name-calling and vilifying one another on social media, I would offer lament as a theological response.”

The study includes the “practice of lament,” because “learning about lament” is not the same as “learning to lament,” Miller said. “Our world is in enough of a state that I think we need to practice lament just a little bit more.”

Miller cautions, “The study won’t tell you exactly what to lament. It invites you to look at your life and the world as you see it, bringing to God those things that you find lamentable — individually and communally with your study group, with your PW groups at all levels and with Christ’s church as a whole.” Lament is addressed to God, and that makes it prayer, she said.

Psalm 137 begins with the captives pledging to hang up their lyres on the willows and stop singing the Lord’s song. They can’t sing the Lord’s song, they say, because God is far away in Jerusalem, not with them in Babylon. But ultimately the captives do sing because they simply learn a new song for the world they are living in. It’s a song of lament, and it brings them closer to the God who had seemed so far away.

“My prayer is that our Bible study together in 2020–21 will help us learn to sing a song that can sing to our world here and now,” Miller said.

Through this study, Presbyterian women and others will experience prayers of lament as the bridge to hope described in the “Black National Anthem,” written as a poem, “Lift Every Voice and Sing,” by poet James Weldon Johnson and set to music by his brother, J. Rosamund Johnson, said Jackson Dowd, who shared a hymn excerpt:

“God of our weary years
God of our silent tears
Thou who has brought us thus far on the way
Thou who has by Thy might
Led us into the light
Keep us forever in the path, we pray.”

“When the psalmist and Jesus lament,” Jackson Dowd said, “they do not tell God how to fix their situations. Rather they trust when God comes, God will right what is wrong. In both Scriptures, God’s presence becomes known — the people trust God and are saved; the temple curtain is torn, tombs are opened and the saints are raised.”

An introductory webinar in Spanish also is in process. If the Spanish language presentation is of interest, email Stephanie Patterson, who will notify you when plans are complete. The recorded webinar in English also will be available on the Presbyterian Women YouTube channel beginning July 1. For more information, contact Patterson or Bible study editor Betsy Ensign-George.