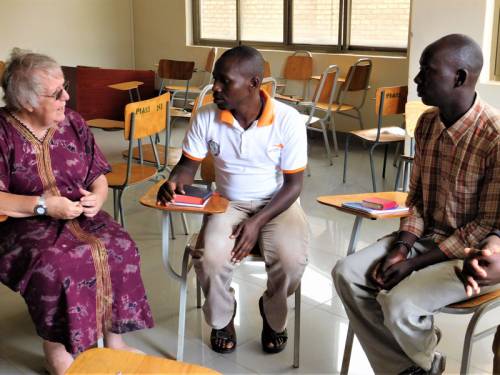 The Rev. Kay Day speaks with some of her PIASS students. (Photo by Kathy Melvin)

LOUISVILLE — The Rev. Kay Day, mission co-worker in Rwanda, believes she has witnessed true integrity in the midst of the global COVID-19 pandemic.

Since 2013, Day has been a lecturer in English and practical theology, preparing students for pastoral ministry at the Protestant Institute of Arts and Sciences (PIASS). The school is supported by five Protestant denominations, including the Presbyterian Church (U.S.A.)’s mission partner, the Presbyterian Church of Rwanda. The school strives to produce graduates who will contribute to Rwanda’s spiritual, intellectual and socio-economic life.

Like many organizations around the world, PIASS recently faced critical decisions about its future. With the announcement by the Rwandan government that schools cannot open until September and no student fees to cover operating costs, some private universities immediately announced their official closing and dismissal of staff.

PIASS was not in a good financial position. The school had not been able to pay staff at all during the month of April. But rather than making an internal decision, it called together its management, board and general staff. Together they would decide a way forward.

The meeting was held in the main conference hall, for those who could attend physically, all wearing face masks and sitting three chairs apart. Those unable to attend in person, since travel restrictions have not been lifted, joined by Skype, including the vice chancellor, Professor Elisée Musemakweli. 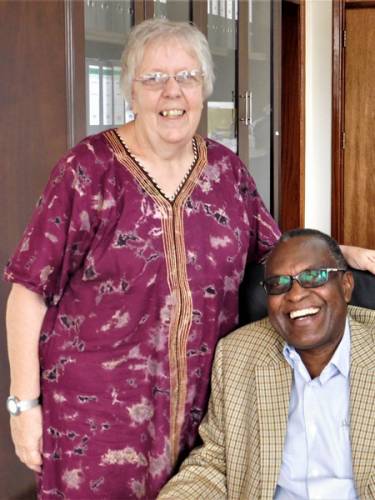 Using a large screen in the conference hall, the vice chancellor recapped the problem and outlined three possible options. The first was to close as others had. This would mean stopping all instruction and restarting the current year in September, hiring back whatever staff was available.

The second was for everyone to take only 30% of their salary for the next four months and continue to operate with online teaching, with staff performing essential work. This would not be a salary, but literally, a living wage, just enough to get by. The third option was to offer the 30% to whoever wanted to take it and the rest could leave and search for other means of support, with the option to return in September.

Day was in the room. She said a vast majority wanted option two, but they had concerns. So senior faculty members got together and made an amendment to address those concerns.

They proposed that the lower paid staff receive 50% of their salary. Since their incomes are low to begin with, 30 percent of what they make would not be enough to survive on. They make between 50,000 to 100,00 RWF a month, the equivalent of $50 to $100.

The amendment was overwhelmingly approved. The result was that everyone could keep their jobs and the school would remain operational. 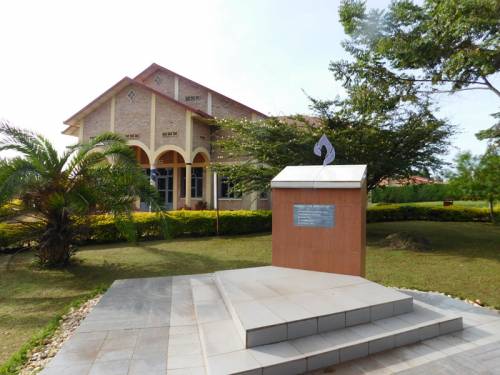 The campus of the Protestant Institute of Arts and Sciences. (Photo by Kathy Melvin)

Another concern was how the institution would make payments to the bank with no money coming in. The vice chancellor assured everyone that the school would take out loans, sell some unused property or do whatever it took to stay operational.

The final concern addressed by the group was that reduced salaries would allow people to live, but not pay back any loans they had taken out. The vice chancellor told the group that he had consulted with a bank and would draft a letter of explanation to the banks involved that the employees were not receiving salaries but would pay back the loans once salaries were resumed. Fortunately, the government has given banks the freedom to negotiate loan repayments during the pandemic.

A document was drafted with the terms of the collaborative agreement and signed by the vice chancellor. He then announced payments would be retroactive to the beginning of April and cover the part of the salary that staff had not received. The rest of April’s salaries would be paid after September, once the institution had income again.

“We closed with prayer, thanking God for his provision and asking for his continued protections and guidance,” said Day.  “I wanted to sing praise, for I had just witnessed the grace of a caring institution that wanted to provide for the people who serve the institution and the compassion of my fellow staff members, caring for the least among us.”

Many Americans know little about Rwanda except that it was the site of Africa’s worst genocide in modern times. In April 1994 a million Tutsi and moderate Hutus lost their lives. Rwanda was left with virtually no infrastructure and an impoverished and traumatized population. During the genocide, 16 Presbyterian pastors were killed, many were wounded, and some fled the country. Churches were empty.

The president of the Presbyterian Church of Rwanda called his colleague Musemakweli to return from Belgium, where he was finishing his doctoral program. Together, with the help of German and Dutch partners, they restarted a two-year theological training course, with emphasis on peacebuilding and reconciliation.

Musemakweli recalls a question one of the first students asked him: “You’re going to teach theology, but we know that before the genocide, theology was taught in this school. We know many ministers have been involved in the genocide. Now, what kind of theology are you going to teach us?”

He used that question to train pastors the biblical principles of servant leadership, reconciliation and peacebuilding. That question helped shape the training now offered at PIASS.

Day has been a member of the faculty since 2013 but does not receive a salary from the institution.