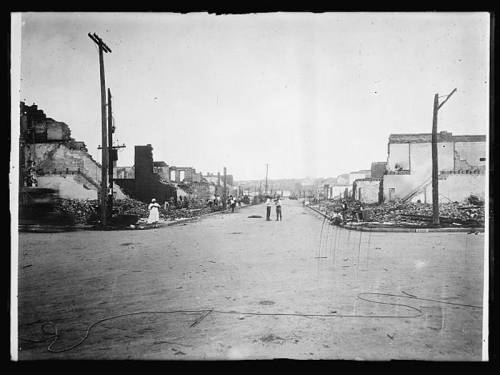 African American people among the ruins of houses and destroyed property in Tulsa, Oklahoma, after the Tulsa Race Massacre in 1921. (Library of Congress photo)

LOUISVILLE — In the second of three events commemorating the centennial of the Tulsa race massacre, Imagine Tulsa 21 and the Synod of the Sun’s Network for Dismantling Racism (N4dR) participants were called to “reflect and respond” to the initial conversation with Hannibal B. Johnson, an attorney, author and consultant specializing in diversity and inclusion as well as chair of the Education Committee for the 1921 Tulsa Race Massacre Centennial Commission.

The co-moderators of the 224th General Assembly (2020) of the Presbyterian Church (U.S.A.), the Rev. Gregory J. Bentley and Ruling Elder Elona Street-Stewart, expressed their appreciation to the group for acknowledging the event that has been kept as one of the nation’s darkest secrets and talked about why it was important they attend the event.

Street-Stewart recognized the importance and similarities of the history of Indigenous people and African Americans as it relates to treatment by and relationship with white Americans.

Following remarks from the co-moderators, individual participants shared conversations on their reactions to the conversation with Johnson in assigned breakout rooms.

One group was facilitated by Gordon Edwards, General Presbyter of Cimarron Presbytery, which is in northern and northwestern Oklahoma.

Edwards began the conversation by asking group members, “Did you learn anything new or from anything older that you heard in a new way or a different way?” 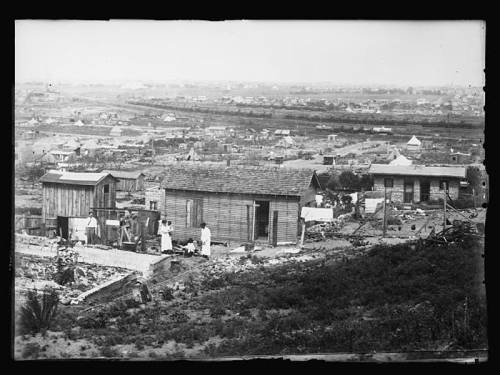 Among the ruins, rustic houses were built to house people displaced by the Tulsa Race Massacre. (Library of Congress photo)

Sharon Darden, a member of Pinecrest Presbyterian Church in Houston and an employee of the Presbytery of the New Covenant for 54 years, said she had not heard of the Tulsa race massacre prior to a monthly movie discussion at her presbytery. “It was all new information to me,” said Darden. “I had never heard of Black Wall Street. I was shocked that it was so many middle-class [and] well-to-do Blacks in the middle of the United States. That was shocking and then shocking to know how it all ended. I was sad. That was really sad for me.”

Barbara Clark, who lives in Pendleton, Oregon, serves as co-moderator for Presbyterian Women in the Synod of the Pacific, and was a Presbyterian missionary for seven years, said, “I’ve been hearing about Tulsa on the news and thinking I’ve never heard about that in my history classes, either in elementary or high school. So, I thought this gives me an opportunity to learn.”

“I had no idea that there was a community that large functioning and things were so beautiful and then all this happened,” said Clark.

Clark shared a personal story of an experience she had with her brother-in-law who grew up in Mississippi but later moved to California. “I have a Black brother-in-law and he’s in his early 90s and early when I very first met him several years ago, I wanted to show him the woods that I loved and where I grew up playing,” she said. “We were only in the woods for a few minutes when he asked me how long we’d be there. At that point he was probably in his late 20s, early 30s, and I could see that he was terrified and hearing this history has helped me to see that’s a fear that I think he still lives with at this particular time, in his 90s.”

“I realized the place that I lived was sheer terror for him,” she said. “He said, ‘Bad things happened in those places.’ I realized he was not at all comfortable in that space.”

In his reflection of the city of Tulsa’s event commemorating the massacre, Edwards said, “I would share one thing, and this is kind of tangential. On Monday [May 31], I went to Vernon AME Church [on North Greenwood Avenue in Tulsa]. It was the dedication of the prayer wall. The Vernon AME Church, their basement wall was not destroyed during the massacre,” he said. “In fact, they held worship there the first Sunday after the massacre in that basement space. And they dedicated it as a prayer wall.”

“The Jewish rabbi who was part of the speaking group shared with us the destruction of Jerusalem in 587 BC and how it was destroyed, except the only thing that remains is the Western Wall that has become the [prayer] Wailing Wall,” he said. “Compare that to this wall where the neighborhood and the community had been destroyed by violence by hatred, by power.  And the only remaining thing is this wall, which we are now dedicating to be a prayer wall for all people to come and to acknowledge the cries of the blood on this ground of the people.”

“I really appreciated his tying those two together because I have been to the praying wall in Jerusalem,” said Edwards.  “And I now have been to the prayer wall in Tulsa, Oklahoma. It was a service in which there were Christian persons speaking, but there also was the Jewish rabbi. There also was a Muslim woman who read from the Quran and offered prayer. There was a Buddhist representative.”

Edwards said, “[The Rev.] Jesse Jackson Sr.  was present. Even with his Parkinson’s, he gave a marvelous address and gave the prayer of dedication of the wall. So, it is important for us to show up, to be present. I think just showing up says something.

“It’s kind of like if a family is experiencing a grief or the death of someone: It’s not what a preacher says, it’s the presence of the preacher just being there. Being with the Tulsa community as it was remembering and grieving the massacre, it was important for them, for me as a white person to be there, to share that and to listen to what was being said.”

President Joe Biden is the first U.S. president in the 100 years since the event to acknowledge the atrocities. Last week the president visited the site of the massacre. Read his remarks here.

Also present at the dedication of the wall and the commemoration of the 100th anniversary were members of the Congressional Black Caucus, U.S. Rep. Lisa Blunt Rochester of Delaware, and other dignitaries.  None of the five U.S. House members or either of the two U.S. senators representing the people of Oklahoma attended the observance.