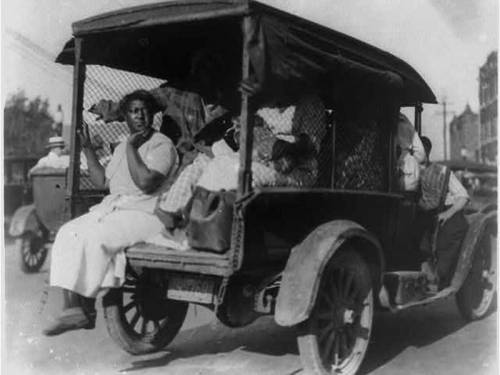 Rear view of truck carrying African Americans during the Tulsa, Okla., massacre of 1921. U.S.Library of Congress

LOUISVILLE — Imagine Tulsa 21 and the Network for Dismantling Racism (N4dR) this week hosted the first of three events to mark the 100th anniversary of the Tulsa Race Massacre featuring Hannibal B. Johnson, a graduate of Harvard Law School and an attorney, author, and consultant specializing in diversity and inclusion issues, cultural competence, human relations, leadership and nonprofit governance.

He chairs the Education Committee for the 1921 Tulsa Race Massacre Centennial Commission, and he is the local curator for the commission’s new history center, Greenwood Rising, which is being built at the historical crossroads of Greenwood Avenue and Archer Street.

Johnson has written four books related to the 1921 race massacre, including “Black Wall Street: From Riot to Renaissance in Tulsa’s Historic Greenwood District” and “Black Wall Street 100: An American City Grapples With Its Historical Racial Trauma.”

While welcoming viewers to the first of the three events, the Listen & Lament session, Kristy Rodgers, moderator of the Synod of the Sun‘s Network for Dismantling Racism and commissioned pastor and director of children’s ministries at First Presbyterian Church in Bartlesville, Oklahoma, said, “This network formed in 2020 with the Centennial of the Tulsa Race Massacre clearly in view. We recognized the anniversary would help ground us in the reality of hard history while encouraging us to act in the present with a view to improving the future.”

“The reality is that generations after the fact, the devastation of those days and the subsequent shroud of silence thrown over it continue to adversely impact not just the city, but the nation,” said Rodgers. “The racial tension that sparked the massacre has never been fully faced, never been fully acknowledged, confessed, lamented or repaired, and just as Tulsa was not the only place plagued by racial violence, it is also not the only place still wrestling with its aftermath.

“As we mark this anniversary, we as a nation have a chance to change the future by engaging this history now and seeking a healthy way to move forward.” 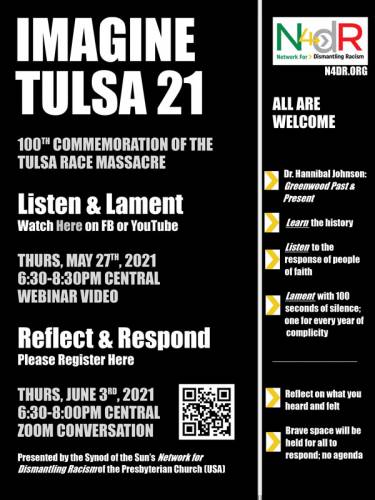 To commemorate the massacre, the Synod of the Sun’s Network for Dismantling Racism (N4dR) is hosting two online events.

In a conversation with the Rev. Todd Freeman, pastor of College Hill Presbyterian Church in Tulsa, Johnson painted a vivid picture and provided a historic perspective of the events leading to the massacre and how that event continues to impact the country today.

According to Johnson, the Greenwood District had an upward trajectory beginning around the turn of the century because of the discovery of oil. “Tulsa went on to become the self-described oil capital of the world, so there’s a lot of economic energy in and around Tulsa,” he said, adding, “The Greenwood District, the Black community, kicked off in 1906. A fellow named O.W. Gurley, who was a relatively wealthy Black businessman from Arkansas, migrated to Oklahoma in the land run of 1889.

“He ended up coming to Tulsa, purchasing some land, and selling some land to other African Americans. He started a grocery store and a rooming house, and then businesses just proliferated after that. So, in the Greenwood District in its early years, you would find rooming houses and hotels and barber shops and beauty salons, movie theaters, dance halls, pool halls, haberdasheries, dress shops, pharmacies, laundries and dry cleaners.”

Johnson says in addition to those individuals who had sold merchandise and commodities, there were service providers, professionals, doctors, lawyers, dentists and accountants in a relatively high concentration. “So, this is really what I would call a ‘Black Main Street’ as opposed to a ‘Black Wall Street.’ Black Wall Street really suggests to many people investment and banking, and it was not a community that was primarily engaged in those endeavors,” he said.

“The Greenwood community really reflected an economic detour, and that is the Black citizens of Tulsa came to the gate of the white-dominated economy, downtown Tulsa, and were denied entry. So, they ended up creating their own insular economy in which dollars circulated and recirculated and recirculated, and really buoyed the economic fortunes of the businesspeople in the Greenwood community.”

Johnson noted the Black people were aided by the relative wealth among some Black people in Oklahoma with ties to the five civilized Native American tribes, specifically the Cherokees, the Muskogee-Creeks, the Choctaws, the Chickasaws and the Seminoles.

According to Johnson, all of those tribes engaged in the practice of chattel slavery and had people of African extraction among them as slaves, even when they migrated forcibly from the Southeast in the 1830s and 1840s to Indian territory, which is now part of Oklahoma. “So, those Black folks who were members of the five civilized tribes, just like their other tribal brethren and sisters, received land allotments in the late 1800s and early 1900s,” said Johnson. “Land was really an accession to wealth, so that made these people relatively well-off economically. It’s those freedmen and other folks who helped really buoy the fortunes of business communities like the business community in Greenwood, Black Wall Street. “

“So bad was the problem that James Weldon Johnson of the NAACP described the summer and fall of 1919 as ‘Red Summer,’” he said. “Red is a metaphorical reference to the blood spilled in the streets, mostly of African Americans from this racial violence and racial trauma.”

Johnson says that during that time there was also a proliferation of lynchings of African American men going on in the country.

Oklahoma became a state in 1907. Between 1907 and 1920, there were 33 documented lynchings in Oklahoma. Of those lynchings, 27 of the victims were African Americans.

“So, it’s the natural context that I’ve just described. It’s the fact that the Greenwood community sat on land that was desired by industrialists and railroad executives. There was talk of moving the Black community farther north and taking that land for higher and better purposes prior to the massacre. There was jealousy, what I call cognitive dissonance, which I think is a psychological term of art that applies perfectly in this situation.”

The massacre was prompted when on May 30, 1921, a young Black teenager named Dick Rowland entered an elevator at the Drexel Building, an office building on South Main Street. At some point after that, the young white elevator operator, Sarah Page, screamed, and Rowland fled the scene. The police were called, and the next morning they arrested Rowland.

Rumors of what supposedly happened on that elevator had circulated through the city’s white community, and by the afternoon of Rowland’s arrest, the Tulsa Tribune ran a front-page story reporting that police had arrested Rowland for sexually assaulting Page.

Page ultimately retracted that initial story. Unfortunately, the retraction came late, in part because of the role the Tulsa Tribune played. The Tribune published a story the next day, May 31, 1921. It was headlined “Nab Negro for Attacking Girl in an Elevator” and It was a false narrative of essentially an attempted rape in broad daylight in a public building in downtown Tulsa.

The webinar closed with a prayer from the Rev. Dr. Robert Turner, pastor of Vernon AME church in Tulsa. The historic church was destroyed in the massacre, but one wall survived, the only thing left of the original Greenwood District. Turner’s prayer was followed by 100 seconds of silence, one for every year since the massacre. Viewers were encouraged and challenged to be still and to sit in the pain and the discomfort; to be in solidarity with those who have endured the silence of individuals, insurance companies and courts.

You may view the “Listen & Lament” event here and an interview with Hannibal Johnson here.