Make A Donation Click Here >
Home › ‘If bigotry is your game, Jesus is not the name’

The Most Rev. Michael Curry, Presiding Bishop of The Episcopal Church, once spent a sabbatical comparing the writings of Frederick Douglass to those who supported enslaving African Americans 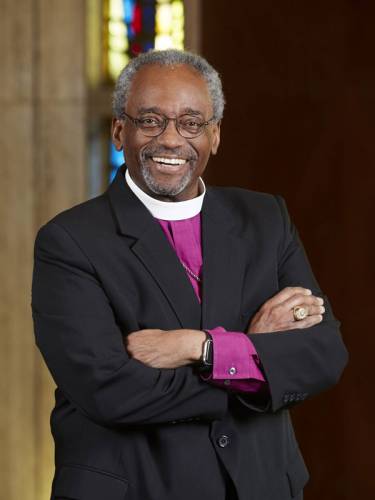 The Most. Rev. Michael Curry

LOUISVILLE — The Most. Rev. Michael Curry, Presiding Bishop and Primate of The Episcopal Church, told about 1,700 people who tuned in for opening worship Monday at the Festival of Homiletics something of what he learned during a sabbatical spent learning to play the violin and studying both supporters and opponents of enslaving African Americans during the 19th century — especially from Frederick Douglass, who was himself formerly enslaved.

“What I have said respecting and against religion, I mean strictly to apply to the slaveholding religion of this land, and with no possible reference to Christianity proper,” Douglass wrote in an appendix to his autobiography. “For, between the Christianity of this land, and the Christianity of Christ, I recognize the widest possible difference — so wide, that to receive the one as good, pure, and holy, is of necessity to reject the other as bad, corrupt, and wicked.”

Curry’s text was John 13:34-35, the new commandment Jesus gave his disciples during the Last Supper. “It was Jesus’ last will and testament,” Curry said, adding that while a commandment to love one another was hardly new, the new part, as pointed out by scholars including Dr. Amy-Jill Levine, is the “love one another as I have loved you” part.

As Curry studied the literature during his sabbatical, he noticed two things. Those looking for biblical support of chattel slavery as an institution would cherry pick the writings of Paul. Douglass and other abolitionists, including the journalist William Lloyd Garrison, “consistently went to Jesus of Nazareth and his teachings. There they saw a liberator. If bigotry is your game, Jesus is not the name.”

“When Jesus of Nazareth — his teachings, his example, his loving, liberating and life-giving spirit — when that Jesus is not at the center of our life, our faith, then our living and our faith are in vain,” Curry said. “When he is, we find our souls. When that has been ignored, the church has lost its way. Don’t believe me? Ask Francis or the monastic movement.”

As he watched the events at the U.S. Capitol unfold on Jan. 6, Curry said that “although I never expected to see it, reflecting on it, I shouldn’t have been surprised.”

“That attempted insurrection arose out of genuine frustration and hurt, but there’s more to it,” Curry said. “It was profoundly a movement not simply of hate groups” but by groups “who bore the ideological position of white supremacy and at the same time somehow claimed to represent Christianity, a kind of Christian nationalism that makes America first.”

“Last time I checked the Ten Commandments,” Curry found this one at the head of the list: “I am the Lord your God, who brought you out of the land of Egypt, out of the house of slavery;  you shall have no other gods before me.”

When Curry interviewed five years ago for his current position, he offered up a different definition for the CEO some people were looking for.

“I said, ‘I have learned to oversee large organizations. That’s not what we’re looking for in a presiding bishop,’” Curry said. His idea was the church needed a Chief Evangelism Officer, “to help the church bear witness to Jesus of Nazareth and his way of life, as God’s way of life. I take evangelism and social justice seriously. They are two sides of the same coin.”

What he didn’t realize at the time was the church’s most critical need “was to share that with the church itself,” Curry said, “the re-evangelism of Christianity into a way of being that looks, loves, gives and forgives like Jesus. It might be our most important act at this time.”

Curry recalled a story told by the Rev. Dr. Howard Thurman in his book, “Jesus and the Disinherited.” As a boy, Thurman used to read from the Bible to his grandmother, who’d been enslaved. She told the boy she wanted to hear from Moses and the prophets and from Jesus, “but I don’t want to hear that Paul,” remembering slaveholders who used to quote, while leaving off what followed, from Ephesians 6:5: “Slaves, obey your earthly masters with fear and trembling, in singleness of heart, as you obey Christ …”

Thurman’s grandmother did have one Pauline exception: 1 Corinthians 13.

“The greatest of these is love,” said Curry. “She got it.”