The church is responding to the Syria-Turkey earthquake, GIVE NOW!
Make A Donation Click Here >
Home › How to resist ‘the fear and outrage that is being encouraged’ 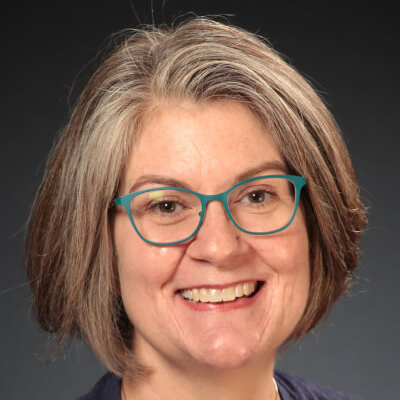 LOUISVILLE — Even in the midst of sabbatical,   Dr. Shannon Craigo-Snell was happy to join the Rev. Dr. Lee Hinson-Hasty for his Facebook Live show Leading Theologically on Wednesday.

“A hazard of sabbatical is I miss getting to talk theology with students and other professors. I’m grateful to talk to you,” she said, then added, “I’m sure the neighbors are really grateful too.”

Craigo-Snell joined the Louisville Presbyterian Theological Seminary faculty in 2011 as a constructive systematic theologian. Her most recent book is “Disciplined Hope: Prayer, Politics and Resistance.” Listen to her discuss the book here.

“I think theology has never been more important than it is now, especially among white Christians who are not racists or xenophobes,” Craigo-Snell told Hinson-Hasty.

According to Hinson-Hasty, “Disciplined Hope” continues the journey Craigo-Snell began in 2017 along with co-author Christopher J. Doucot in their book “No Innocent Bystanders: Becoming an Ally in the Struggle for Justice.”

“It was an accidently written book,” Craigo-Snell said of “Disciplined Hope,” and the two do in fact go hand-in-hand, she said. “Many of us engaged in politics or justice work know how draining that can be. You can’t sustain it well without spiritual disciplines.”

Craigo-Snell said the 2016 election demonstrated to her “there are people and forces who realize” the “amount of money to be made and the power to be garnered by making people afraid and outraged.” But being faithful “includes resisting the posture of outrage and fear.” Her response was to begin writing a hopeful or joyful prayer each day and posting it on social media.

“What happened was, all kinds of people started joining me,” she said. One of her children reported a friend’s family was using Craigo-Snell’s prayers at dinnertime, “and they aren’t Christian.” She got a call from a group of peace protesters in North Carolina seeking prayers for their work. Those prayers were of course offered through the online community.

“This community merged virtually,” Craigo-Snell said. It made her think that “I’m not the only one needing to find ways to resist the fear and outrage that is being encouraged.”

A premise of “Disciplined Hope” is that hope is a virtue. Another word for virtue is habit, Craigo-Snell said, “and a metaphor for that is it’s a muscle. It’s the discipline that we don’t just wait for the things that make us hopeful. We practice being hopeful every day.” Hope is “more than optimism” or “thinking this will work out fine. Christian hope is living in the knowledge that God can do a new thing. How do we do that every day?”

That reminded Hinson-Hasty of “Field of Dreams.” “Pray the hope and it will come,” he said. “Your light of hope is lighting others’.”

“Disciplined Hope” has two parts, Craigo-Snell said. The first is a reflection on what prayer is. The second part is a journal of daily prayers “which are oddly a historical chronology of the ways people in the U.S. resisted our worst instincts” following the 2016 election.

Like Dietrich Bonhoeffer, “you were writing in the midst of a difficult time,” Hinson-Hasty told her. “How do we make it through when it gets hard? I feel that’s so much of the story of the Christian life.”

After thanking Hinson-Hasty for the flattering comparison, Craigo-Snell called seeking hope “a choice, and the thing about choices is, they form us.” One chooses drinking water instead of soda. Eventually, “it doesn’t occur to you to drink soda anymore,” Craigo-Snell said. “The bigger things in life work similarly. We practice our choices until they become part of us, and I think that is particularly true among spiritual disciplines. They form us.”

Asked to name other choices to which God is calling her, Craigo-Snell mentioned Scripture first. “The more chaotic things seem, the more I need to return,” she said. The second is bluntness. “The time for nicety was a long time ago,” Craigo-Snell said. “Being polite is how oppression keeps going. It’s time for Christians of good faith … to be really blunt, to use words like ‘racism’ and ‘white supremacy’ and ‘Jesus’ and ‘resurrection.”

“Let’s be honest, authentic and truthful,” Hinson-Hasty said. “If I hurt your feelings, let’s talk about that.”

A companion discipline is learning to apologize, Craigo-Snell said. “We practice apologizing every Sunday. I got it wrong, this is not what God intended, I am sorry and I will try to do better next week. Then we have so much trouble during the other six days of the week … Telling the truth as plainly as possible goes hand in hand with needing to apologize.”

“You have resources and friends,” Hinson-Hasty reminded the listening audience. “You are not alone.”