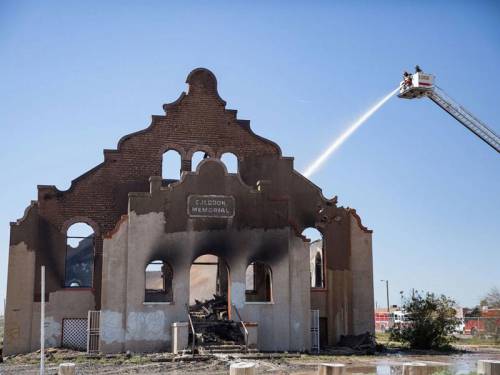 LOUISVILLE — The adobe walls are all that remain of the C.H. Cook Memorial Church in Sacaton, Arizona.  Built in 1887, the historic church was destroyed by fire on March 25.

“Our community is grieving the loss of this historic landmark,” said the Rev. Martha Sadongei, Native American consultant to the Presbytery of the Grand Canyon’s southern area and a member of the Kiowa/T’hono O’odham tribes. Added to the National Register of Historic Places in1975, the 40-member church is believed to be the oldest Presbyterian church in Arizona.

The church fire was a result of arson. Two juveniles and an adult were taken into custody within hours of the fire and held on suspicion of arson.  It has not been determined if the crime was racially motivated.

Sacaton has a population of about 1,000 Natives living on the reservation of the Gila River Indian Community. While the fire was devastating, services have continued. The community will continue worshiping in a chapel constructed in the 1980s and located nearby.

“We’ve been worshiping in the facility for about 15 or 20 years,” said Sadongei. “The new church is just a few thousand yards away from the historic site.”

The newer building was not impacted by the fire.

“When I started this role in January I thought I was only going to be looking at the physical condition of buildings,” said Steve Hirsh, Coordinator of Native American Church Properties for the Presbyterian Church (U.S.A.).  “I started at the Pima area churches and began to realize that these churches are far more than buildings,” calling each church “a conduit of and to its members.  No matter which building they worshiped in, everyone was connected.”

“After being informed that the First Church of Sacaton was in flames, I couldn’t imagine the devastation and loss that must have been felt not only within the Pima community but throughout the community as a whole,” he said. “I had the privilege of admiring this historic building dedicated to Charles H. Cook and was impressed not only by its earthly beauty but its bones (structural integrity) as well.  It was truly unusual to see such a large adobe structure so sound, especially after 132 years.”

Hirsh says he considers it an honor to inventory Native American Presbyterian properties.  “I look forward to seeing each church’s uniqueness as I did at the C.H. Cook Memorial Church,” he said.

“The church remains closed off by the fire department,” said the Rev. Brad Munroe, presbytery pastor for the Presbytery of the Grand Canyon. “At this point we don’t know if anything is salvable. We won’t be able to make that determination until we are allowed in the building.”

The church is named after Charles H. Cook, a young missionary who arrived in Sacaton in December 1870. Cook founded the church as part of his missionary work in the Southwest. He later went on to create a theology school for Native Americans.