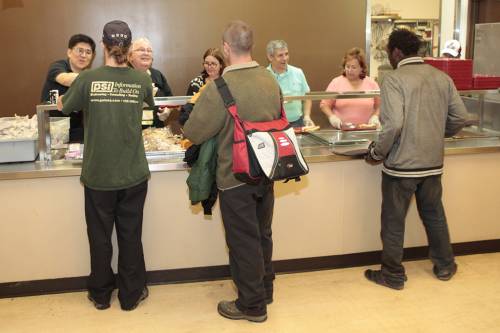 Members of The National Presbyterian Hispanic/Latino-a Caucus, as the caucus was known then, serve dinner to the guests of the Union Gospel Mission in Portland, Oregon while attending the 222nd General Assembly in 2016. (Photo by Rod Cartesegna)

“In the end, we will remember not the words of our enemies, but the silence of our friends.”

“It is possible to become discouraged about the injustice we see everywhere. But God did not promise us that the world would be humane and just. [God] gives us the gift of life and allows us to choose the way we will use our limited time on Earth. It is an awesome opportunity.”

LOUISVILLE — The Hispanic/Latinx National Caucus of the Presbyterian Church (U.S.A.) stands in strong solidarity with our African American siblings in the United States.

While people of color of all persuasions have suffered and continue to suffer violence, ignominy and systemic discrimination, the history of violence against black people in this country remains the most egregious example of white privilege and supremacy, perpetuating the mortal national sins of slavery and Jim Crow laws.

The murders of unarmed black people by the police in recent years reflect those dynamics. Michael Brown, Trayvon Martin, Eric Garner, Dontre Hamilton, Philando Castile, Tamir Rice, and more recently, Breonna Taylor and George Floyd, among many others, remain in our ”consciences of color” as martyrs of a society that still values more wealth and power over the welfare of the entire community.

Hispanic/Latinx Presbyterians condemn without any reservation these anti-gospel and anti-humanity beliefs and practices. We long for the day when justice will finally prevail in this nation. As Dr. King put it so beautifully, ”… little children will one day live in a nation where they will not be judged by the color of their skin, but by the content of their character.”

We also echo this cry of hope: ”All lives will not matter until black lives matter.”

— The Rev. Dr. Antonio (Tony) Aja, on behalf of the Coordinating Council of the HLNPC