Share God’s love with our neighbors-in-need around the world through One Great Hour of Sharing.
Make A Donation Click Here >
Home › Global partners working to help Mediterranean refugees

Hope breaking out in the face of overwhelming odds 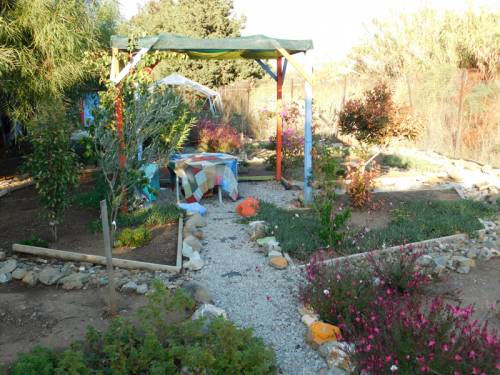 A garden at the Pikpa camp that was closed by the Greek government. (Photo by Kathy Melvin)

LOUISVILLE — On October 3, 2013, the world watched in horror as photos emerged of a boat full of migrants from the horn of Africa, seeking refuge on the Italian island of Lampedusa, sank, killing more than 350 people.

Paolo Naso, a layperson in the Waldensian Church and national coordinator for Presbyterian Church (U.S.A.) global partner Mediterranean Hope’s Refugee and Migrant Program, was one of those people. Mediterranean Hope had been active in welcoming and walking alongside migrants and refugees in Italy and advocating for just policies. In an instant the organization knew it was not enough.

Naso was one of the speakers Tuesday at a webinar offered by the Office of Public Witness (OPW), Presbyterian Disaster Assistance (PDA) and Presbyterian World Mission on the migration crisis in Southern Europe, moderated by Luciano Kovacs, coordinator of World Mission’s Office of the Middle East and Europe.

“History and current global polices in the Global North are hugely responsible for causing people to forcibly leave their countries,” he said when introducing the speakers. “A study by Brown University in 2020 analyzed data related to forced migrations from countries such as Afghanistan, Pakistan, Iraq, Libya, Syria, Yemen, Lebanon, Somalia and the Philippines, following the U.S.-led war on terror from 2001-2019. These conflicts have caused 36,869,026 refugees and internally displaced people. Many of these forced migrants reached the coasts of Italy and Greece. Today we will learn what churches and [nongovernmental organizations] in those countries are doing to alleviate the suffering of so many people.”

Mediterranean Hope knew it must develop a creative strategy to facilitate a legal and sustainable process of migration, especially for those who are most vulnerable.

In their research they discovered a forgotten, never-implemented article in the Italian Constitution and offered a proposal to the government to open humanitarian corridors from some North African countries. Article 10 said, “A foreign national, who is denied  —  in his or her country  —  the enjoyment of the democratic freedoms established by this Constitution shall be entitled to the right of asylum in the Republic under such conditions as shall be established by law.”

More recently France, Germany and Belgium have adopted similar policies. The humanitarian corridors became the model to offer a safe passage to safe countries and facilitate the process of integration.

He paraphrased a quote from the Rev. Dr. Martin Luther King, Jr. as motivation for their actions. “There comes a time when one must take a position that is neither safe no politic nor popular, but one must take the position because conscience tells us it is right. It is important to our faith.”

Also speaking from Mediterranean Hope was Ibrahim Diabate, born in Ivory Coast who, thanks to a scholarship, became an intercultural mediator and legal operative on behalf of migrants. For the last two years, he has been on Mediterranean Hope’s staff as a cultural ambassador in Calabria, Italy.

Diabate said Calabria is an area of poverty and social discrimination, organized crime and exploited people. It is a lush area of the country where citrus is grown. Migrants become laborers who cannot afford to buy even the basic necessities.

The final speaker was human rights activist Efi Latsoudi, one of the founders of Lesvos Solidarity, a grass-roots organization based on Lesvos Island in Greece. Lesvos Solidarity runs educational, psychosocial and medical programs for refugees and has a strong advocacy program for refugees’ rights. Latsoudi is the founder of the open refugee camp Pikpa, an autonomous and self-run camp for vulnerable refugees, which was forcibly closed by the Greek authorities in October 2020. 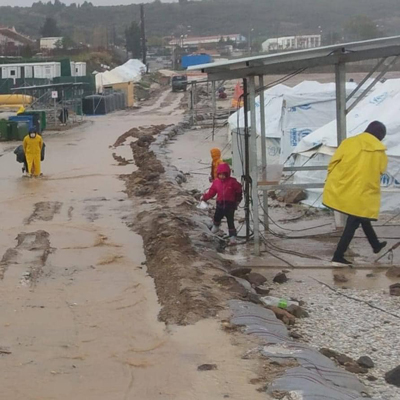 The temporary Moria II camp, where most do not have access to even basic needs. (Photo provided by Lesvos Solidarity)

Near Moria, one of the largest and worst refugee camps in the world, Pikpa served as an example of solidarity for people all over the world. Moria burned last year and the new temporary camp, Moria II, is filled with thousands of people living in horrible conditions.

“It’s not only the conditions,” that have had a huge impact on the local society, Latsoudi said. Instead of fighting the policies that are trapping people, they are fighting against the people. “They are aiding racist xenophobic discourse. This is the most dangerous thing that is happening in Lesvos and what we need to fight against,” she said. “Lesvos Solidarity, with other actors, is fighting to denounce what is happening and to fight for human rights and solidarity.”

“We don’t have a refugee problem. We have a solidarity problem,” Kraus said. “We have a problem of compassion and a failure of imagination to understand how we can both accompany and advocate for those who are on the move, both on our own southern borders in the Americas, as well as Europe and Asia.”

Catherine Gordon, who works on international issues for the Office of Public Witness, said in the immigration arena, OPW focuses on policies impacting refugees, temporary protective status and the root causes migration. She said one of the most powerful ways churches can make an impact is by advocating with the government around U.S. policies. She said she is encouraged that the new administration is making immigration its top legislative priority.

The webinar was recorded and is available here.