Ahead of the UN Climate Change Conference, faith groups around the world call for climate justice 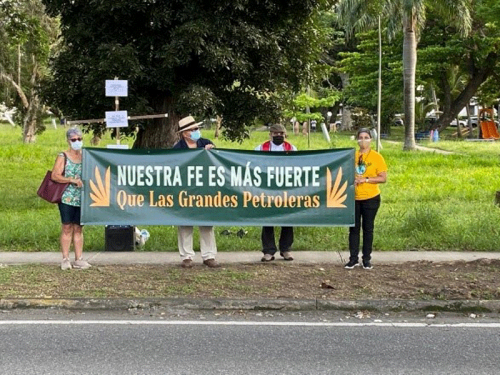 Groups across the Americas and around the world participated in Faith for Climate Justice activities held Sunday and Monday. (Photo courtesy of Red Latina)

LOUISVILLE — Faith groups across the United States, Latin America and around the world held a series of public actions Sunday and Monday calling for climate justice at the upcoming UN climate negotiations , known as COP26, as part of a global, multi-faith uprising called Faith for Climate Justice.

“Humanity has misappropriated the resources of Creation. Those resources were declared good by the Creator and sustain life. What God has called good and created beautiful has been damaged by the human hand. The consequences of that damage are now visible and affect our quality of life and the entire ecosystem,” said Rev. Gerson Serrano Arroyo, moderator of the Presbytery of San Juan in Puerto Rico. “We need to change our life practices to harmonize with Creation and seek to mend the footprint we will leave on the planet for future generations.”

All the congregations of the Presbytery of San Juan, motivated by its Ecological Ministry office, held a Minute for Creation where they highlighted the importance for people of faith to care for Creation and take the necessary actions to achieve this.

Later, several members held a public event at the José N. Gándara Park in Hato Rey, where they emphasized the message of eliminating the use of and investment in fossil fuels for the present and future of the planet. 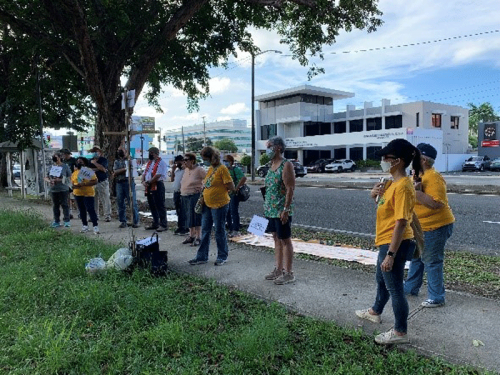 Those participating in Faith for Climate Justice activities raised their voices for care of God’s good Creation. (Photo courtesy of Red Latina)

Near the central banking area of the island and important government offices, they raised their voices for the welfare of all Creation.

“Human beings are acting as hoarders, spendthrifts and ultimately, bad stewards of a treasure that is not ours, which belongs to all,” Serrano Arroyo said in his message.

Other Presbyterian and Reformed communities also participated throughout Latin America as part of a series of global events organized by the GreenFaith International Network, a global, multi-faith alliance of grassroots organizations in Africa, the Americas, Asia and Europe.  In total, more than 500 actions took place in 43 countries.

In New York City, young Jewish activists and interfaith allies blocked the entrance to the headquarters of BlackRock, the world’s largest asset manager, which invests billions of dollars in oil and gas projects.

In the United Kingdom, host of COP26, an interfaith group marched to the Prime Minister’s residence at 10 Downing Street in London and presented religious demands and petitions, then projected the climate demands onto the Houses of Parliament. Churches across the UK displayed banners calling on the government to end new fossil fuel projects and provide generous financial aid to climate-vulnerable countries.

In Jakarta, Indonesia, Southeast Asia’s largest mosque sported a banner in front of the national capital complex calling on the government to end coal production. The adjacent Catholic cathedral and a large Protestant church nearby responded with banners calling for an end to deforestation and increased renewable energy development.

The global action gave voice to demands developed by people of faith that include an immediate end to new fossil fuel projects, deforestation and related financing; universal access to renewable energy; green job-creation policies, an increase in renewable energy and a just transition for workers and affected communities; support for climate migrants; and reparations from countries and industries responsible for the majority of historic greenhouse gas emissions. More than 200 senior religious leaders and 50 religious groups representing more than 50 million members have signed on to these demands. 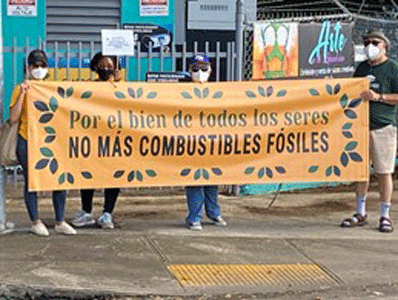 The Latin American actions were the beginning of an ongoing, multi-faith effort to organize grassroots support for climate justice.

“We faith communities are becoming much more active in these struggles,” said the Rev. Dr. Neddy Astudillo, co-coordinator of the Latino Presbyterian Network for Creation Care and GreenFaith for Latin America. “As part of an international network, we have a deep conviction and look forward to joining with the other civil society groups working for climate justice.”

Red Latina is a group of lay and ordained leaders and allies working to create holistic environmental ministries throughout Latinx churches. The aim is to create a network of Latinx churches to provide tools and a voice in combating the climate crisis.