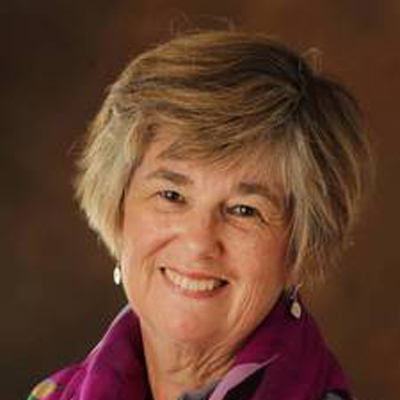 LOUISVILLE — In Gail Godwin’s book “The Finishing School,” which features an older woman and a 14-year-old girl, the woman tells the girl she can tell by looking whether a person has congealed. That person will have no more surprises, the woman tells her young friend, and to avoid the trap she must constantly be on guard against gelling too soon. It’s a valued vignette in one of the Rev. Dr. Lib Caldwell’s favorite books.

Caldwell said Wednesday during a Facebook Live interview with the Rev. Dr. Lee Hinson-Hasty that her soul also requires that kind of space for creativity. “I never planned my life,” said the professor emerita of McCormick Theological Seminary, who’s now a visiting faculty member in religious education at the Vanderbilt Divinity School. She began teaching at McCormick about 30 years ago with the agreement she’d begin working on her doctorate within two years of her start at the Chicago seminary.

“So that’s what I did,” said this year’s winner of the Excellence in Theological Education Award given by the Committee on Theological Education, which in non-pandemic years is awarded during General Assembly. “In 30 years of teaching, I’ve never done the same thing twice. I’ve wanted to be new every day.”

Hinson-Hasty, senior director of Theological Funds Development for the Committee on Theological Education and the Presbyterian Foundation, titled his interview with Caldwell “When Kids ask Hard Questions.” He had several examples: “Where is God? How do I talk to God? How do you know there is a God?”

The best advice Caldwell has for parents and educators — and during the pandemic, parents are increasingly finding themselves as their children’s primary educators — is to “first, take a breath.”

“If a question leaves us speechless, it means we haven’t thought about it,” Caldwell told Hinson-Hasty. If adults don’t ask the hard questions, “how can they answer them for their child?”

One possible answer to a hard question is, “What do you think?” That was the approach used by one famed Christian educator, Professor Sara P. Little, according to Caldwell, who studied under her. One day Caldwell heard Little speak to a group and then field questions afterward. “She would say, ‘I have some thoughts about that, but what about you?’ She refused to be the answer-giver,” Caldwell said. When a child asks a difficult question, she said, a good answer is often, “Let’s wonder about this together.”

Some questions posed by children come from personal experience. Caldwell said she once visited a museum with her sister and her two nephews. One of the boys saw a man asking for money, and so he asked his mother for money to give to the man. When he heard the man was homeless, Caldwell’s nephew asked his mother, logically, “Why is he homeless?”

Caldwell said she felt fortunate it was her job merely to teach budding clergy and educators how they might answer. Her sister, she noted, “has to live with it every day.”

For questions about the mystery of God, Caldwell said parents should first be comfortable with their own questions. “Are parents doing anything about their own spiritual formation? Do we talk about how our faith is lived in the world?” Our children watch us, she said. “They know everything we do.”

With her students, Caldwell asks them daily for their thorns and roses — their lows and their highs — but also their blossoms, the things they’re looking forward to. She said she advises families to find things they can do together even during a pandemic: walking around the neighborhood, taking an even longer hike or playing music together. Or, as one family she knows does, dress up in costumes and rehearse and then put on a short play together.

At the end of the 30-minute interview, Hinson-Hasty had a surprise for Caldwell: About 20 friends, colleagues and admirers had come together via Zoom to congratulate her on her award and to tell Caldwell how grateful they are for her many contributions. Watch the interview and a portion of the Zoom call that follows here.