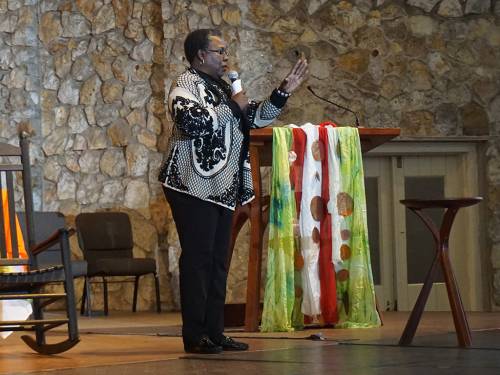 MONTREAT – When keynote leader the Rev. Dr. Betty Deas Clark began to share her story on the second day of the 2017 College Conference at Montreat, a reverent hush fell over the packed auditorium.

Clark, a celebrated author, pastor, global strategist, advocate and philanthropist, is perhaps best known as the first woman to be appointed pastor of the storied Mother Emanuel AME Church in Charleston, South Carolina, in its 198-year history. She began her tenure at Mother Emanuel early in 2016, not long after the tragic events of June 17, 2015, and—what many at the gathering did not at first realize until she took the stage—is no longer Mother Emanuel’s pastor.

“It is good to be in the presence of people who love the Lord and acknowledge that the church is not dying because we are here,” she began, echoing the refrain that the Rev. Dr. J. Herbert Nelson, II, Stated Clerk of the PC(USA), had earlier asked participants to repeat when he greeted the conference that morning. “It is good to be here because you care, because you’re willing to go beyond the rhetoric, beyond the talking, to be the transformation that needs to take place.”

In her powerful and emotionally raw address, Clark risked laying her soul bare before the capacity crowd of college students and their advisors who are gathered here Jan. 2–5 for the annual conference themed, “Beyond Babel.”

“I am so grateful that you are giving me an opportunity to talk about my journey,” she said, “but before I can start, I need to share something. After I was moved from Mother Emanuel, I felt ostracized by the church universal. I was thrown into the face of the church, the world, where no one knew me. I was given a job to do with no instructions. If I had been of the other gender, they would have sat down with me, they would have strategized with me, but I wasn’t of that gender…I’m being transparent—I felt the church had just forsaken me for doing my best.” 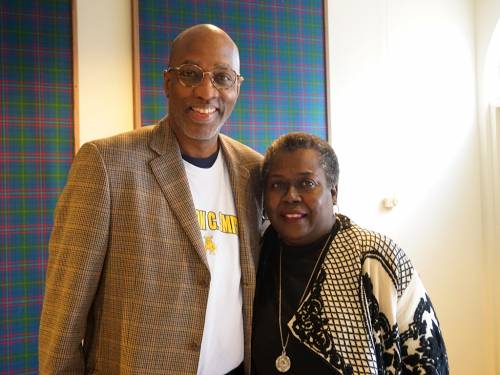 After first recounting her call to ministry following a lucrative career as a tailor, Clark then described how the impact of the tragedy of June 17 not only transformed her, but also the entire city of Charleston. Although she was serving a church in Sumter, South Carolina, at the time of the shootings, Clark said her heart was in Charleston as she led in the city’s prayer meetings in the wake of the tragedy.

“What happened in Charleston crossed denominational and racial lines,” she said. “I saw a sense of unity and the power of unity and what can happen.”

When the presiding bishop subsequently named her as Mother Emanuel’s pastor, she saw her call as addressing the pain and the brokenness of the congregation, where she said the members were still numb six months later.

“They wanted to sweep the whole thing under the rug, move on with life,” she said. “I asked God to help me bring a word that would speak to their hearts even though their human psyche was blocking everything out, that there’s still hope beyond this tragedy.”

As Clark attempted to be one pastor to the four distinct groups she had identified—the survivors, the families of those who were killed, the congregation and “everybody else”—she was faced with the challenge of how to speak one word to everyone. To further complicate matters, she was “given clear instructions not to talk to the survivors, not to meet with or try to minister to the families.”

“Either I do what God is telling me to do or what my leaders are telling me to do,” she said. “And knowing me as you now do, I followed God. In my opinion as the leader at that time, the church and its members were the forgotten victims. All the news talked about was the survivors, the family members, but no one took the time to talk about the church family. These individuals in many ways were more traumatized than the family members. All they see is visitors upon visitors coming in to mourn with them for the loss of the nine. How would you feel if people came to your house and they kept asking you about the persons who were no longer there? The congregation became invisible—they were the by-products of June 17. How would I tell them they had value?”

Continuing to follow her calling against her denominational leaders’ wishes, Clark went down to Orlando in the wake of the Pulse nightclub shootings. “I knew what it meant to support them,” she said. “I went to Orlando out of appreciation for what had been shown to Mother Emanuel. I didn’t know that it wasn’t right for me to show love. I didn’t know that I was just supposed to talk about it and not be about it. I didn’t know. Out of my heartfelt desire to unite the congregation, praying, ‘Lord make us one,’ I was snatched away from that.”

Clark, who now serves as pastor of Bethel AME Church in Georgetown, South Carolina, said that after Mother Emanuel she had “the esteemed privilege that I can look at myself in the mirror and say that I have done what God has called me to do.”

“Post Mother Emanuel,” Clark concluded to a standing ovation, “I can say to anyone I did the best with what was handed to me. If ever there was a time when the church needed to be the church, it’s now. If there was ever a time when we need to collectively share our voices with the other for the other, it is now. And so in the midst of many voices in the marketplace, I encourage you, make your voices heard. Make your position, make it a strong position.”