…be led forth in peace. (Isaiah 55:12). Support to the Peace & Global Witness Offering.
Make A Donation Click Here >
Home › Forman Christian College continues to offer education in Pakistan amid pandemic

Flexibility, tireless work ethic and technology are keys to carrying on despite COVID-19 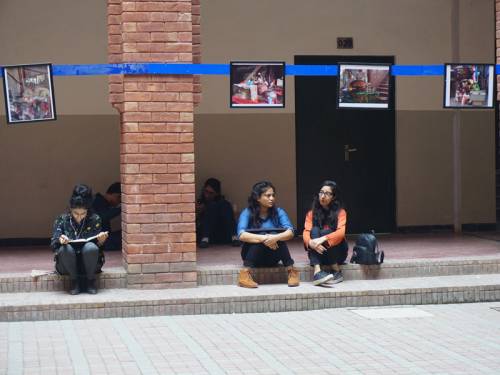 Students at Forman Christian College in Lahore, Pakistan, study together in the fall of 2019, prior to the pandemic. (Photo by Robyn Davis Sekula)

JEFFERSONVILLE, Indiana — Though in-person classes are suspended at Forman Christian College in Lahore, Pakistan, faculty are doing all they can to ensure the university’s more than 5,000 students are still receiving an education.

After two weeks of re-writing course objectives and outlines, faculty began teaching virtually on March 30. If students don’t have internet access, packets that include lectures and coursework are being mailed to students.

If that doesn’t work, students can come to campus this summer and finish up spring courses.

And in several cases of extreme dedication, a faculty member called a student and read the student the lecture for that day’s class so the student could keep up. Other faculty have loaned out used laptops and smart phones.

Flexibility and tireless dedication are part of the work ethic of Forman, which was founded in 1864 by Dr. Charles W. Forman, a Presbyterian missionary. The college served India and then Pakistan for more than 150 years. It’s prepared to survive the COVID-19 pandemic, too.

“We did our budget projections through December, taking a fairly pessimistic view,” says Dr. James Tebbe, Rector of Forman Christian College. “I have to admit I was very relieved when I saw that we could keep all of our faculty and staff.”

Diligent stewardship has helped Forman’s leadership build up reserves that are helping cushion the university during this time. Technology improvements on campus have been key as well, Tebbe says. The school also has its own water supply and electrical system that augments water supplied by the city. This has been helpful in allowing the staff who live on campus, including Tebbe, to remain safely sequestered.

Students are keeping up

Out of 5,000 or so university students, about 100 do not have internet access, estimates Cheryl Burke, head of Academic Advising at Forman. Only about 50 cannot be reached; some may have changed phone numbers or email addresses recently.

During her 16-year tenure at Forman, Burke has been largely responsible for student activities and how they augment academics on campus. She’s helped the college turn its attention towards helping students succeed. Her most recent position is serving as head of the Academic Advising Center, which works with students to ensure they have what they need to complete courses and graduate on time. This work has helped Forman build a strong foundation for academic success — and it’s part of why students can continue to succeed off campus while learning at home.

Burke’s work is sponsored by Peachtree Presbyterian Church in Atlanta.

“Our students are doing really well,” Burke says. “The biggest issue is the emotional toll it is taking. We’ve received a lot of panicky emails from students. We’re telling them, ‘Just breathe. It will be OK.’”

Forman has been on a rapid growth trajectory for the past few years, Tebbe says. The campus is busy and crowded in normal circumstances. A new campus center was under construction when the pandemic hit; construction has been halted for the time being.

Enrollment may take a dip in the fall, Tebbe says, and Forman is preparing for that financially. “There could be people who say we will sit this out for a semester or two, and see how things go, or people could say we don’t have the money right now,” Tebbe says. “If that’s the case, we would take less in the fall and more in the spring.”

The unknown is how the virus will affect Pakistan. The country shut down its borders and canceled all international flights in March, Tebbe says. His own plans to go to the U.S. were put on hold, and now, he’s glad so that he can stay and continue to guide Forman.

Pakistan doesn’t seem to have a high number of COVID-19 cases, but it’s hard to know if the numbers he is hearing are accurate, Tebbe said. Forman’s campus is largely deserted, with only a few staff and faculty coming and going. Forman’s campus is heavily guarded and not open to the general public, which helps keep exposure to the virus down.

About 20,000 people who attended the annual Tablighi Jamaat, a Muslim renewal movement in a suburb of Lahore, are now quarantined.  Numbers indicate that about 7,000 people in Pakistan have the coronavirus, but it remains to be seen how accurate this count is, if the virus will spread — and if so, how it will affect the population.

Greater Lahore is a metropolis of about 13 million, and the population is densely packed, making transmission of the virus more likely. Tebbe has heard estimates of about 40 ventilators in the city — compared to the entire Chicago area, which has 1 million fewer people but about 1,000 ventilators. A widespread illness could be devastating.

Perhaps the only bright spot right now is that the air quality is remarkably improved with much of the industry in the area shut down, Tebbe says. He keeps a careful eye on air pollution numbers, which are often critically high. “The numbers have even been in the green zone, which is good, and I’ve never seen that during our time here,” Tebbe says.

Support from the U.S.

For Christians in Pakistan, Forman is a place where they can receive an education on an equal playing field with non-Christian students, says Rev. Sam Schreiner, Executive Director of the Friends of Forman, a non-profit organization that supports Forman Christian College.

Christians are about 2 percent of the population in Pakistan. Christian churches have been targeted for violence. Christians are given far fewer opportunities to receive an education and do not have access to the same services as others. In many cases, Christians are given the most menial of jobs for low pay. Scholarships funded by contributions from the U.S. are crucially important to allowing students to rise above these circumstances, Schreiner says.

Christians make up 12 percent of the Forman student body, and 80 percent of them need some form of scholarship. “Many of their parents are drivers and day laborers who have been out of work this month and will really struggle,” Schreiner says.

The other important cultural aspect of Forman is that Muslim and Christian students can study alongside each other, which is a rarity in Pakistan, Schreiner says. They can get to know each other as friends, and change perceptions of each other. “Forman is doing so much more than providing an education in Pakistan,” Schreiner says. “Forman is changing the culture of Pakistan and modeling tolerance.”

If you’d like to see how Forman operates and hear from Forman students, you can view an inspiring new video about Forman here. Schreiner says the college needs financial support from the U.S., especially for student scholarships. This enables students to finish their degrees, particularly now when members of their family may not be working. You can contribute here or get in touch with Schreiner at 866-460-6313 extension 102 or sschreiner@FRIENDSOFFORMAN.ORG.

Robyn Davis Sekula is Vice President of Communications and Marketing for the Presbyterian Foundation. She is a ruling elder in the PC(USA) and an active member of Highland Presbyterian Church in Louisville, Kentucky. She can be reached at robyn.sekula@presbyterianfoundation.org or at (502) 569-5101.