Make A Donation Click Here >
Home › For reindeer, climate change is no game 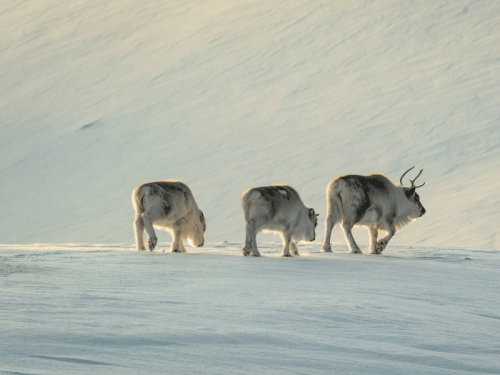 LOUISVILLE — Those gathered in Karlsruhe, Germany, for the 11th Assembly of the World Council of Churches focused on caring for Creation Thursday during a press conference that featured panelists hailing from places as far-flung as the Arctic Circle and the Caribbean.

Speaking to journalists gathered both in person and online were:

Sept. 1, Kennedy noted, marks the launch of the Season of Creation, which draws to a close on Oct. 4. Kennedy is focusing on intergenerational justice, because “climate change affects most particularly those who are young and those who are not yet born. As a grandmother, I feel responsible to ensure we change our way of living on this planet so we can have a survivable future, and Indigenous perspectives are crucial.” 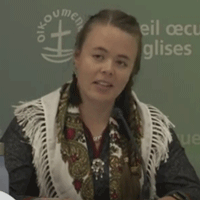 “Reindeer herding is a big part of our culture. Today we see our reindeer starving” because the lichen they feed on is increasingly covered by ice in the winter and can’t survive higher-than-usual temperatures during the summer months.

“Indigenous rights and climate justice are the same thing,” Rensberg said. “We need to unite as a church globally to help us survive this climate crisis.” 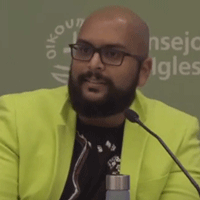 Warde said that for people living on Caribbean islands, “there are many things about Creation that we love and that we know about. We who live in the Caribbean also see the effects of climate change,” including more floods close to shore and increased landslides in the mountains.

Especially hard-hit, he said in response to a journalist’s question, is the tourism industry. “Industrialization has caused a lot of pollution, and we see that in the tourism sector,” Warde said. “A lot of countries in the region take their livelihood from that, and it’s hard to see how any of that can stop.”

One thing the pandemic has taught us, Kennedy said, “is that when there is a pressing need, governments can make the changes they need to make very, very quickly. Why can’t we do that for climate change? We can do it. We have the tools.”

The Sámi people celebrate the new year in May, when the reindeer are calving. Ensuring a food source such as lichen, also known as reindeer moss, for those vulnerable calves as well as their mother is increasingly difficult, Rensberg said, when one day the temperature is well below zero and the next day it’s raining.

“The reindeer can’t find food as they used to,” Rensberg said. “The summers are hot, and the groundwater levels are sinking. It’s hot and dry in the mountains, and the food they eat in the summer is burning away.”

“The weather is unreliable,” Rensberg said. “Without reindeer, our culture will disappear.” 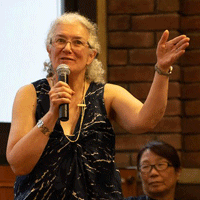 Asked about developing a new climate theology, Kennedy noted that Christians and others “operate out of our beliefs. If we believe we are the pinnacle, we will behave that way. If we understand we are only a part of the web of life, we will behave another way.”

“I know many churches have been working hard at reducing their footprints,” Kennedy said. “But not all of them are. It’s a challenge for all of us.”

“Cities around the world are declaring climate emergencies,” Kennedy said. “If you are in an emergency, what are you going to do? You’re going to respond to find the best ways forward and not just business as usual.”

Nearly two dozen people from the Presbyterian Church (U.S.A.) are attending the World Council of Churches’ 11th Gathering. On Friday, WCC staff announced, a group of young people from around the world will conduct a #FridaysforFuture climate protest as part of their Ecumenical Youth Gathering in Karlsruhe. Learn more about their plans here.