Make A Donation Click Here >
Home › ‘Focus: Palestine’ is a new resource available from the World Communion of Reformed Churches

The digital textbook looks at the region’s theological, historic and political contexts 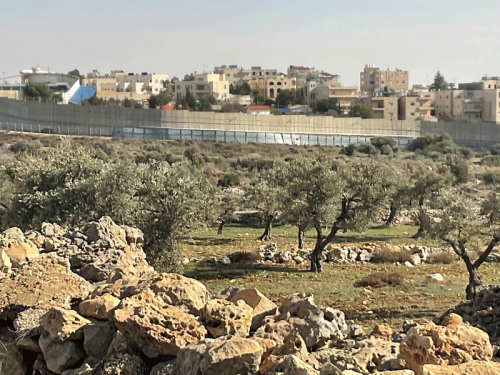 The resource was created to “lift up Palestinian voices while placing the situation into theological, historical, and political contexts,” according to the WCRC. It is co-authored by Rev. Katherine Cunningham and Noushin Darya Framke, longtime members of the Israel/Palestine Mission Network.

The authors were commissioned by the WCRC and tasked with researching many resources, but primarily partner churches in the WCRC, sibling churches to the PC(USA), and predominately churches of the Southern Hemisphere — churches that were historically colonized.

“We aimed to make this a comprehensive document — though not exhaustive — even as changing news and events kept us needing to update sections,” said Framke. “I believe readers will find this resource answers many of the questions they might have.”

Cunningham said the resources includes graphics that are easily used in contexts where English is not the dominant language.

A number of videos created for the project can be accessed through these links:

These are samples of the 13 video episodes included in the new resource.

The authors said the resource can be used by leadership in churches globally within the congregational context as well as in a seminary setting.

“Mostly we hope that communities will adapt it to their contexts and engage in an interconnected way around issues of social justice, political, economic and human rights concerns, and elaborating the dynamics of what the WCRC is coming to call global apartheid and the mission of the church to be about transforming that in its ministry and theology,” said Cunningham.

Framke said the various parts of the resource can be used in a modular way, meaning they can stand alone. Study leaders can decide which parts work best for them in their context.

“For me it was learning in a more substantive way about the pervasive oppression and violation of human rights globally as I researched in the websites of the churches who are part of the WCRC family,” said Cunningham. “The realities of interconnected struggles and hopes, along with the church’s complicity and simultaneous challenging of those realities, gave me a deeper nuance of the Palestinian struggles in global Southern contexts. By that I mean that the ‘general’ awareness I had was sharpened, focused and deepened by the research about Palestinian solidarity in the churches whose websites and ‘deep dives’ we encountered.”

“For the church in South Africa, joining the struggle against apartheid on political as well as theological grounds became a question of faith,” he said.

The World Communion of Reformed Churches is comprised of 233 church members and more than 100 million Christians in Congregational, Presbyterian, Reformed, United, Uniting and Waldensian churches.

The Presbyterian Church (U.S.A.)’s partnership with the WCRC forms a network of ecumenical and mission partnerships that is important to the way in which the PC(USA) connects to churches globally and engages in solidarity and the support of justice and human rights.

Established by action of the 216th General Assembly in 2004, the Israel/Palestine Mission Network “encourages congregations and presbytery mission committees, task groups and other entities toward specific mission goals that will create currents of wider and deeper involvement with Israel/Palestine.”

Go directly to the new resource by clicking here.