Former PC(USA) moderator among those denied

LOUISVILLE – The moderator of the 216th General Assembly of the Presbyterian Church (U.S.A.) was among five interfaith leaders denied access to a passenger jet headed for Israel this week. Rick Ufford-Chase was part of an interfaith delegation of 23 Muslims, Jews and Christians boarding a Lufthansa Airlines jet at Washington Dulles International Airport that was bound for Israel on Sunday. 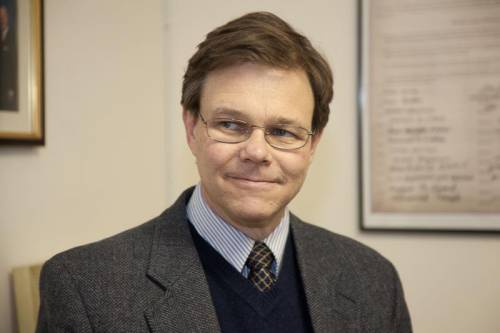 Rick Ufford-Chase was among five interfaith leaders denied access to a commercial jet headed for Israel.

“All five of us are well-known for our commitment to nonviolent direct action on behalf of Palestinians living under the grinding daily reality of military occupation in Gaza and the West Bank,” Ufford-Chase said. “We suspect that we were the first to feel the impact of the Knesset’s recent declaration that they will deny entry for anyone who has supported nonviolent strategies to force Israel to end the occupation.”

Earlier this year, the Knesset, Israel’s parliament, made changes to the Law of Entry preventing leaders from the Boycott, Divestment and Sanctions (BDS) movement from being allowed in the country. Israeli officials have said the entry ban is strictly for those who are involved with significant, ongoing actions to promote and advance a boycott in Israel.

The five who were barred were from the Presbyterian Peace Fellowship, Jewish Voice for Peace and American Muslims for Palestine. Their plan was to join the larger interfaith group and visit with human rights activists in Israel and the West Bank.

“This was a delegation of humanitarian-rights advocates who are committed to work together with partners in the Middle East to bring an end to the lunacy of this seemingly never-ending conflict,” Ufford-Chase said. “In a week when violence has broken out once again in Jerusalem, it seems the height of irony that peace activists would be denied the ability to travel there at this moment in time.”

Ufford-Chase said Israel delegated responsibility for denying their entry to Lufthansa Airlines with “no explanation, no documentation of the request from Israeli authorities.”

In 2014, the 221st General Assembly of the PC(USA) voted to sell church stock in three companies that were profiting from Israel’s non-peaceful pursuits. Ufford-Chase says he and the others had anticipated potential problems getting into the country as a result.

“We thought that some of us might not get in when we got to Tel Aviv, but no one was prepared that it might happen before we even left the U.S.,” he said. “However, I’m far more troubled for those who live in Palestine and Israel, experiencing the impacts of the occupation on a daily basis.”

Ufford-Chase made clear his commitment to try to rejoin the delegation if at all possible. “What makes this particular trip matter so much to me is that we were successful in recruiting a delegation made up of equal numbers of Christians, Muslims and Jews, and the majority of the members are people of color. Crossing those boundaries to do this work together is critically important as we support the movement for justice and peace in Israel and Palestine.”