Montgomery, Alabama, congregation members reckon with their church’s past

by Kelsey Davis | republished from the Montgomery Advertiser

In 1956 the church decreed that no member of the “Negro race” would be allowed in its church. The present day congregation has spent the past two years repenting for this decision. 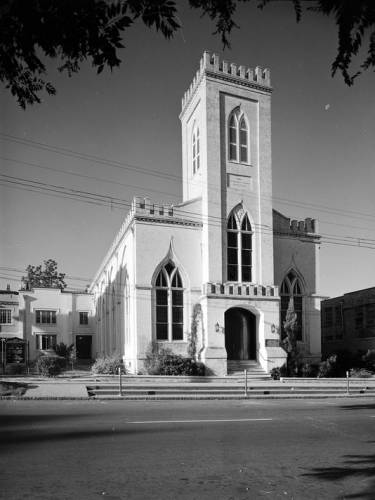 MONTGOMERY, Ala. – A black woman walked into First Presbyterian Church (PCA) in the early 1970s, taking a seat midway up the pews. As soon as she sat down, a white woman stood up and left.

“She was not going to sit through that service with a black person sitting in the church,” Dan Reid, now 59, remembers from his youth. “I was ashamed of that white lady, to be honest with you. Ashamed of the prejudice she showed.” His father was a deacon of the once-bustling congregation.

That instance was symptomatic of an attitude that plagued the church since at least 1956, when it adopted a motion decreeing, “no member of the Negro race (will) be received as a member of our church or seated in the sanctuary for regular worship.”

People referred to it as “that church that wouldn’t let black people in.”

The one that stationed deacons outside its doors on Sundays and turned away African-Americans who wanted to worship there.

That in 1961 did nothing when violent protests of the Freedom Riders spilled into its parking lot next to the Greyhound Bus Station. Young men and women, both black and white, had boarded a bus that would stop in Montgomery in an effort to show the nation that the South still was not accepting desegregated transportation, despite what had been ordered by the courts. When they arrived, they were severely beaten.

The proclamation, the sins of omission and the decades of blatant racism took a toll on the congregation. 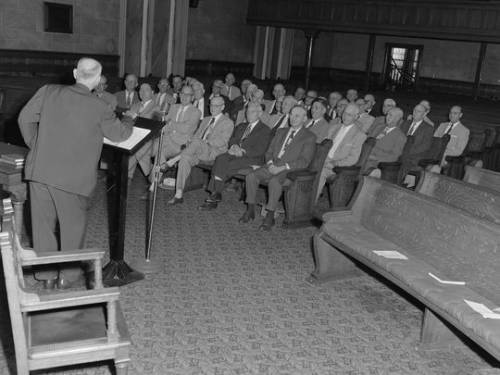 Membership dwindled from the thousands to its current membership of 50. In 2000, when membership was around 160, First Presbyterian sold its downtown location to First Baptist, and moved east to Chantilly in Pike Road. First Baptist now uses the building to house Hope Inspired Ministries.

Roughly 600 people would show up for services on any given Sunday in the ’60s, but now, just 30 regularly attend church.

DePace sees the church’s decline in membership as a direct result of the sins of their forefathers’ prejudice, a manifestation of their spiritual inheritance.

Because of this, and because they’re sorry for what happened, the congregation of First Presbyterian Church has spent the better part of the past two years confronting that past, learning why they should repent of it and hoping for new life in light of it.

That idea didn’t exactly make sense to the congregation when DePace presented it to them.

Most didn’t belong to First Presbyterian during the civil rights era. Some had no idea about the church’s past when it was still located downtown on Adams Avenue.

If they did belong to it during that time, they didn’t necessarily agree with the church’s stance on not allowing black people in.

“I was a little disconcerted by the whole process, I’ll have to admit,” said Priscilla Stewart, a member of First Presbyterian since about 2004. Stewart joined First Presbyterian after it moved from its downtown location to Pike Road in 2000 and was part of the committee that helped bring DePace from the Maryland area to First Presbyterian in 2008.

Her reaction was what the congregation generally felt, DePace said. They were willing to trust but unsure why they should repent of something they didn’t do. 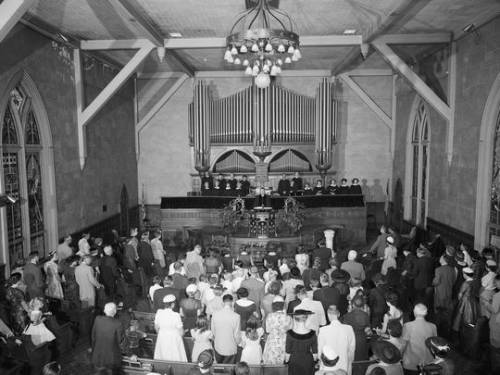 “What we did was we explained to them, ‘Well, you’re right. You’re not asking forgiveness for something you didn’t do. You’re asking God to take away any discipline for something your forefathers did. You’re basically asking God to remove the spiritual inheritance of the former church and instead restore to us the spiritual inheritance that Jesus offers,’” DePace, 56, said.

DePace slowly unpacked this concept in an 18-part sermon series, explaining to the church this teaching’s roots in Presbyterian theology. He wanted them to understand that this series wasn’t just about political grandstanding or making a show.

This was about the message of the Gospel and Jesus’ integrity, he said.

Part of this experience for the congregation also involved taking an in-depth look at First Presbyterian’s past. It also involved inviting Terrence Jones, the lead pastor at Strong Tower church located on the West side of Montgomery, to come preach. 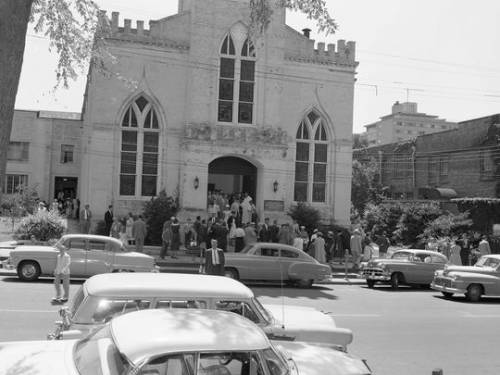 After finishing the sermon series, DePace presented that history in greater detail, using a PowerPoint presentation made up of 41 slides that winds through every racially charged mistake the church made along the way.

It points out how in 1960 church leadership reaffirmed the motion that declared black people would not be allowed in. In 1975 how a black pastor accidentally got invited to preach at the church, and how members of the church walked out when he got to the pulpit. And how in 1988 there were “numerous questions and comments of concern” about black children being allowed to join the church’s day care.

“As I learned more, I realized that even though I am not the one who owns slaves, my grandparents weren’t the ones who owned slaves … I’m living in a culture where the results of those sins are still very evident,” said Vivian Arnold, a member of First Presbyterian. “And so I became convicted that those particular sins, even though they weren’t my personal sins, needed to be researched so that we would know what happened. I just became convinced that that all needed to be out in the open, talked about, discussed and repented of publicly.”

This nearly two years worth of preparation was geared toward readying the congregation for a proposal DePace would make in February.

“We decided to have the worship service and challenge the congregation to publicly put their name to the Resolution of Repentance, which is a very big step. We asked them to pray about that,” DePace said. 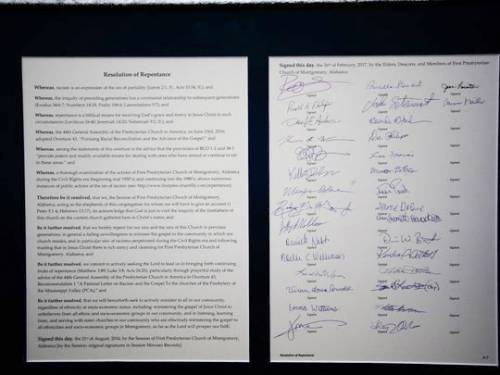 A resolution of repentance is signed by members of First Presbyterian Church seeking repentance for former racist practices at the church. (Photo: Albert Cesare)

In essence, the resolution proclaims the sins of the church’s past and firmly resolves, with the help of God’s grace, to sin no more.

That message seeped in throughout the duration of the sermon series, its underlying principle sticking with Stewart to the point that she became tearful when she talked about it.

“There’s nothing that we did that would make God desire to love us or to want us to be part of his family. Yet because of grace and because of mercy he chose to do that for us. And if that has been done for me, how could I not extend that to you or to my neighbor or to anybody that lives in that community?” she said. “It very quickly became an issue for me of am I going to just continue to say these words, or am I going to put actions and personal sacrifice and conviction behind what I say I believe?”

So with that in her heart, Stewart and 31 other church members signed the proclamation declaring their repentance for the sins of their forefathers.

Two years of preaching, learning, repenting and signing the proclamation all culminates to the planting of a seed, the beginnings of something DePace hopes will flourish. He wants their contrition to bear fruit, for the congregation to grow in number and diversity. To date, the church does not have any black members. That’s something DePace is eager to change. He wants the congregation to represent the community it’s surrounded by and to one day draw in African-American leadership at the church that once excluded their race. 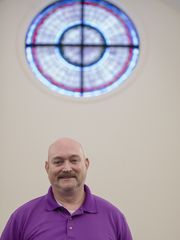 It will be a slow-moving process requiring an abundance of patience, DePace observed. Decades worth of wrongdoing followed by decades worth of ignoring the wrongdoing won’t be resolved in a short span of time. And it will be contingent on the congregation living out their profession of repentance.

In part, that will mean exploring a way to more outwardly express their sorrow in a genuine way. Something even more public than their signing of the proclamation.

“There’s been a lot of concern on our part as a congregation that we present this to the community in such a way that it would not appear that we were grandstanding or that we were trying to get attention called to ourselves or that this was just a simple, political response to the difficulty that’s been going on in our nation lately. … We don’t want to be anything but very authentic in our request to the community,” Stewart said.

With the authentic repenting of sins comes the feeling of a weight being lifted, the shedding of unwanted excess, hope and excitement for what the future holds.

For DePace, that hope in the future is about new life, something his Easter sermon delves into.

“The Gospel doesn’t bring a threat. The Gospel brings new life. What we desperately need to recover is that new life is supposed to provide a resurgence of love, joy and satisfaction,” he said. “Not just new life individually or new life just in our church, but our church becoming a source of new life in the community.”

This kind of hope shines through congregants like 71-year-old Arnold. She’s been a member of First Presbyterian for less than two years, but her excitement for what the next 20 may look like bursts from her when she talks about it.

“I believe that God will use that small congregation. I’m going to be dead and gone. I won’t know,” Arnold said. “But I believe that there is a germ of a movement there that is not present in any other church here in Montgomery. … The Holy Spirit is going to use what’s going on at First Church now sooner or later. And like I say, I’ll be dead and gone. I’ll never see it. But I have great hope that the city of Montgomery will see it. So I’m just full of hope.”