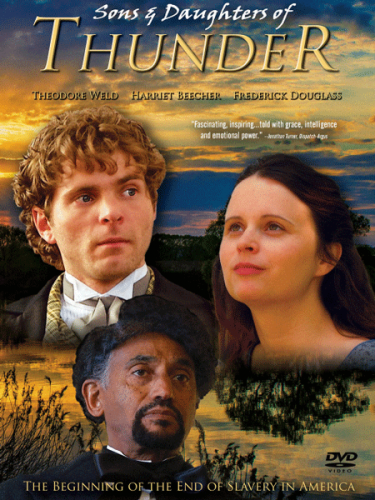 The film “Sons & Daughters of Thunder” is available in DVD and through streaming services. (Contributed image)

Most Presbyterians know that Harriet Beecher Stowe wrote the influential “Uncle Tom’s Cabin.” But few know of her time spent in Cincinnati, where she was awakened to the horrors of slavery as a young woman.

There is an excellent feature film, “Sons & Daughters of Thunder” available on DVD that tells the story of the tumultuous events that led to her awareness of the gravity of the issue. Directed by Kelly Rundle and produced by his wife Tammy, it is the story in which the then unmarried Harriet Beecher and her older sister Catharine were witnesses in 1834 of what became known as the Lane Seminary Debates. The film is based on a play by Earlene Hawley and Curtiss Heeter.

Harriet and Catharine, the latter already famous from her work and writings in education, came to Cincinnati, as did her brother and future Congregationalist/Presbyterian minister, Henry Ward Beecher, because their father, Dr. Lyman Beecher, had been invited to start Lane Theological Seminary. Its wealthy backers hoped the seminary would become the leading center of ministerial education in the West.

A Congregational minister at first, Lyman Beecher was known for his fiery but learned sermons. He was opposed to slavery but not an abolitionist, instead belonging to the Colonization Movement that believed African Americans could not get along with whites and so should move back to Africa. He also served for several years as pastor of Second Presbyterian Church in Cincinnati, though this is not shown in the film. 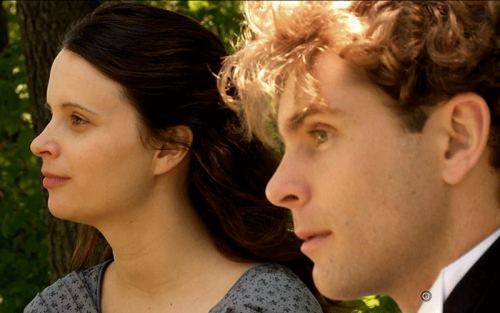 The film deals with the 23-year-old Harriet’s relationship with Lane student Theodore Weld, a radical abolitionist and social reformer becoming well known for his fierce denunciation of Colonization, even though the president of his seminary advocated it. Harriet first meets Weld as he is tacking onto a tree a poster announcing a series of antislavery debates that would take place over 18 evenings. Harriet argues with him, as does her sister Catharine, both of whom try to grab his posters. He gets them back, and they part.

At a meeting called by President Beecher, and at which to their surprise the sisters are invited, the president speaks of the changing times and the need to be cautious. The students interrupt him, with Weld stating that he and many of the students want to talk openly about emancipation. The wealthy members of the Board of Trustees are dead set against this.

During the previous few years, Cincinnati had erupted in several riots led by its proslavery citizens, attacking Blacks and burning down houses. In a scene between Weld and Dr. Beecher, the student tells him that the trustees are all men who fear that their business with slave owners will be hurt. The students go ahead with their plans despite the trustees and Dr. Beecher. The president is out of town during the lively debates — not really debates, as no one defends slavery, but rather the speeches are strong affirmations of immediate emancipation and denunciations of any attempt to force former slaves to leave the country. The two sisters are present, with Catharine futilely attempting to defend her father’s Colonization views.

The portions of the debates shown are lively, with several of the students from the South explaining how Weld had changed their views: one was the son of a slave owner; another had believed in Colonization. A professor speaks derisively of Blacks, declaring that they cannot be social equals and that “science” proves them inferior. Weld himself stoutly defends his position against that of a professor who is aligned with Dr. Beecher. At times the back and forth threatens to grow violent, the moderator struggling to maintain order.

Probably the most compelling speaker, next to Weld, is James Bradley, movingly describing how he was stolen from Africa and transported across the ocean, and how he labored at night for 8 1/2 years to earn enough money to buy his freedom. He refutes the claim that Blacks could not make a living on their own by pointing out that as an enslaved manager of an estate he had supported both his master and himself.

The “aha” moment for Harriet comes during one of the debates when Weld dramatically throws down a bundle of posters he has been clutching in his hand. As they scatter upon the floor, we see that they are notices of runaway slaves, the descriptions of the condition of the slaves revealing their horrible treatment. As Harriet picks one up and reads it, she realizes that the assertion that abolitionists are exaggerating the terrible treatment of slaves is false. (This apparently is the film’s substitute for the trip that she made to Kentucky, where she saw firsthand the brutality of slavery.)

There is much more to the film — even the tiniest implication that a romantic interest might have developed between Harriet and Weld, though Harriet’s future husband, Prof. Calvin Stowe, is in a few scenes, few because he did not participate in the so-called debates themselves. (They would marry in 1836 after Stowe’s first wife died, and the two would participate in the Underground Railroad while at Lane.)

I was delighted that the story is bookended by scenes of Frederick Douglass delivering in 1852 at Rochester, New York, his July 5th speech, known as “What to the Slave is the 4th of July?” It is a powerful oration in which he politely but scathingly indicts the hypocrisy of white Americans who wax eloquently on the subject of freedom while holding in bondage millions of African Americans, Douglass points out. Harriet and Calvin are in the audience — and the central part of the film is a series of flashbacks while Harriet is writing a letter to her old friend Theodore Weld as a result of hearing Douglass.

The film quickly details the aftermath of the debates in which the trustees force Dr. Beecher to forbid even the discussion during mealtimes of slavery and emancipation. One of the professors who took part in them is fired. The students, led by Weld, are so upset over this curtailment of free speech that 100 of them leave the seminary and go over to Oberlin College, where they are assured they can continue their abolitionist activities. This leaves Dr. Beecher with just a few teachers and about five students (two of whom were Beecher’s own sons). Even though, thanks to Prof. Stowe, the seminary had the largest library in the region and nationally known professors, it could not recover from the shame of its treatment of its students.

Lane Theological Seminary lingered until the 1930s, when it closed and its assets were given over to the seminary that did become a major educational center for ministers in the West, Chicago’s McCormick Theological Seminary, which is where my own Presbyterian connection comes in. I am a 1963 graduate of McCormick, having worked in the library where I often came across books that still bore the stamp of “Lane Theological Seminary.” Also, its financial assets benefitted me in that I was a “Lane Scholar,” a scholarship awarded to those maintaining a high grade point average.

Another Presbyterian connection, not mentioned in the film though pointed out earlier, is that Dr. Beecher was pastor from 1833 to 1842 at Second Presbyterian Church, one of several congregations that merged through the years to become the present day Covenant-First Presbyterian Church. The house in which the Beecher family lived in is still standing, the only building of the Lane Theological Seminary that remains. Because a few scenes of “Sons & Daughters” were shot there, I decided to visit it. 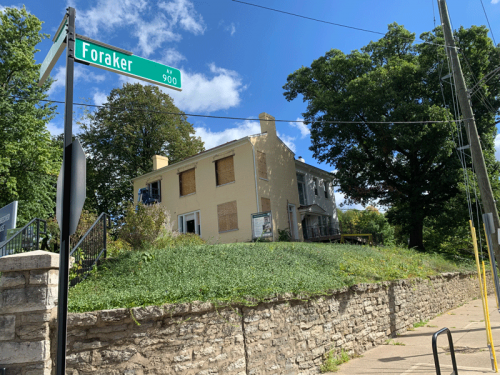 During a visit to the Harriet Beecher Stowe House in suburban Cincinnati, I talked with the executive director, Christina Hartlieb, who was involved in the making of the film. She pointed out that because the house is undergoing major renovation to restore it to its original form, none of the film showed the exterior of the place. But a few interior scenes were shot there.

Her tour of the rooms where Harriet and her family ate, discussed the issues of the day and studied took me back in time to the events dramatized in the movie. Each room is filled with Beecher memorabilia and information about the Underground Railroad and Lane Theological Seminary. Dr. Beecher’s study, where I took a picture of Hartlieb, is gutted and ready for restoration to the film’s antebellum period. It was easy to imagine Dr. Beecher arguing with Theodore Weld while Harriet looks on, a couple of scenes in which Calvin Stowe looks at her fondly.

I also saw during the visit the DVD of “Sons & Daughters” on sale in the gift shop. And beside it was a second film by the Rundles, which Hartlieb aided in producing. It is the related documentary, “Becoming Harriet Beecher Stowe.” Just a half-hour in length and covering her whole life, it is crammed with interviews and archival photographs and illustrations. The documentary includes interviews with Philip McFarland, author of “Loves of Harriet Beecher Stowe”; historians Chris DeSimio, Christine Anderson, John E. Douglass, John Getz, and Michelle Watts; and Pulitzer Prize-winning Joan D. Hedrick, author of “Harriet Beecher Stowe: A Life.” 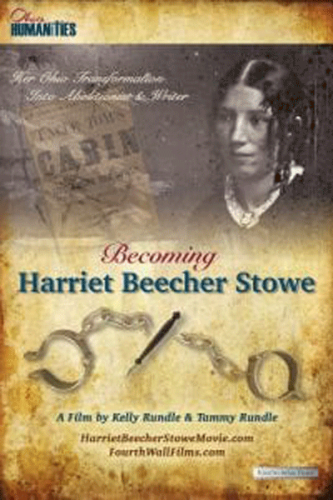 Hedrick says, “The Cincinnati years, I think, profoundly affected [Harriet Beecher Stowe] … Her early marriage, her early motherhood — I think it was hard for her to leave that sacred ground. When she moved there, she was a New Englander, but when she went back East 18 years later, she was an American.”

Hartlieb also is interviewed in the film. “Harriet Beecher Stowe is probably the most underrated author ever … What she was able to accomplish was that she changed public opinion on the issue of slavery. Before ‘Uncle Tom’s Cabin,’ people in the North were not abolitionists. They were pretty indifferent — that slavery thing? That’s down in the South. Why should I worry about it?

“After reading ‘Uncle Tom’s Cabin,’ that’s when people start to go, ‘That slavery thing is really bad. I had no idea people were treated that way. I had no idea that was going on.’ The reason that this white woman who grew up in New England was able to do that was the 18 years she spent in Cincinnati, and the people she met here, and the issues she was exposed to.”

Read more about what Hedrick and Hartlieb told quadcities.com by going here.

Thus, I commend the documentary as well as the feature film for personal and church use. These are movies that matter, films that manage both to entertain and to inspire us to confront the remnants of racism in our own day. I will soon post a review of this second Stowe DVD at visualparables.org.

The two films are available on DVD for home use, and special licenses are available for colleges and organizations for classroom and public showings. For a wealth of information and photos, check out the company Fourth Wall Films’ home page here. You also can stream “Sons & Daughters of Thunder” on Vimeo for $6.99.

For McNulty’s fuller review of the film, go here. This review is included with 12 discussion questions in the October 2021 issue of the Journal.

The Rev. Dr. Edward McNulty is a Presbyterian minister and workshop leader residing in Bellbrook, Ohio. The author of three film books published by Westminster John Knox Press, his latest is “Jesus Christ: Movie Star.” More than 2,200 of McNulty’s film reviews can be read for free at visualparables.org. The same site offers his journal (at a subscription price), which includes discussion questions for most films.