Speaker asserts discipleship cannot be sustained abstractly, but ‘where God places us’ 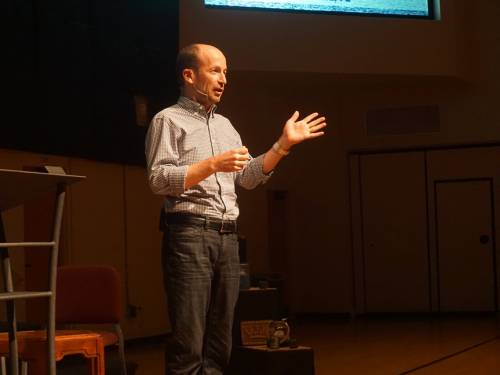 LAKELAND, Fla. – From Alex Absalom’s opening assertion that discipleship and mission are completely intertwined to the Rev. Dr. M. Craig Barnes’s closing assurance that Jesus has given his disciples—then and now—the power to be his witnesses, the speakers on the opening day of The Fellowship Community National Gathering charged over 200 church leaders to more intentionally “live on mission” in order to make missional disciples.

The Fellowship Community (TFC)—the result of a 2014 merger of the former Fellowship of Presbyterians and Presbyterians for Renewal—is “a network of churches and leaders called together to proclaim the gospel of Jesus Christ by growing in Christ’s likeness, living by God’s word, and joining in God’s mission in the world.”

Absalom, the gathering’s main speaker, is a coach, speaker, and writer on the practicalities of transitioning churches into disciple-making cultures. In addition to Barnes—the president of Princeton Theological Seminary, who preached the opening worship on Feb. 21—others joining Absalom in leadership at the gathering are the Rev. Dr. Mark D. Roberts, executive director of the Max De Pree Center for Leadership at Fuller Theological Seminary, Bible study leader; and preachers, the Rev. Dr. Alice Ridgill, Manning, S.C.; the Rev. Dr. Carolos Emilio Ham, Matanzas, Cuba; and the Rev. Zachary McGowen, Lakeland, Florida.

Beginning with the question, “Why Missional Discipleship”—the title of his first plenary address—Absalom contended that “we hear and obey Jesus particularly in our place of mission, where Jesus places us.”

“We as followers of Jesus are called to go,” he said. “We can’t sustain discipleship in the abstract—it works best when we’re wrestling with the paradoxes of following Jesus in the real world, with our distant relatives, people at work…where God places us.”

Absalom said that there’s a worry for contemporary disciples as they continue to learn to follow Jesus,, namely, “how to represent and share the gospel in the context where God has placed us today.”

“What is good news going to look like to your neighbors or at the retirement home or at the gym,” he asked. “What does it look like? How do we incarnate this message of Jesus Christ in those specific places?”

In encountering people where they live and work, Absalom also urged his listeners to be “naturally supernatural” as they seek to make disciples, in other words, no matter their outreach, “unless Jesus turns up, we’re really in trouble.”

Referencing Jesus’ call of the first disciples in Matthew 4, Absalom said that in that well-known passage Jesus doesn’t promise his disciples that he will take away their problems or have the answers to all of their questions before he asks them to do something for him. 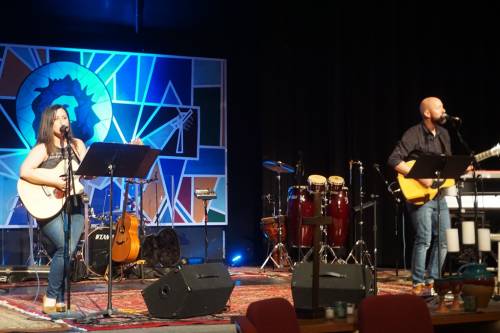 Absalom provided specific examples of how he has personally engaged in disciple-making with those both indifferent to or cynical to faith. “Disciple-making begins at hello, how you live your life,” he said. “If we are open to the opportunities, we can represent Jesus in ways that are authentic and natural.”

“Jesus is this radical, radical missionary—his plan is to have us on mission from day one, make disciples from day one, do signs and wonders from day one,” he said. “When we realize we’re not doing that, we create theologies to excuse and explain away our behavior. That’s not doing theology the right way. We need to repent of that. Our theologies are letting us off the hook from what Jesus challenges us to do. Disciple-making is an invitation to a journey with Jesus at the center.”

Following the opening plenary, Roberts led a Bible study which served to undergird Absalom’s thesis. Roberts, author of “Ephesians” in the Story of God Bible Commentary series published by Zondervan, said that he had long been wanting to either preach a year-long series or write on the biblical letter for several key reasons.

“There’s all this talk about church, and while new things are intriguing, the conversations are often very uninformed theologically and biblically,” he said. “Ephesians is the most thick in its discussion of the church—no other book that has more to do with what the church is, what God has called the church to be.”

In a thorough exegesis of Ephesians 1, Roberts focused on the letter’s key themes, specifically that God’s grace is extraordinary and extravagant, and that God’s glory is being revealed in God’s grace. He also emphasized that in Ephesians 1:10, God has chosen to reveal a mystery.

“God loves opening the present for us so we can see it—it’s a plan for the fullness of time,” he said. “God is putting time and history together and God is going to reveal what he has done, and this is now revealed in Christ. What is the plan? God’s big plan, God’s big mission, is to gather up all things in Christ. There are many different ways to talk about the mission of God from a scriptural point of view, but this particular description is one that we desperately need in today’s world as it exactly undergirds the kind of view of church that Alex [Absalom] was talking about.”

Asking why bringing together all things—not only people, but all things—is so important, Roberts observed, “When you think of disciples being out there and living out in the world, it is all the stuff of life that God cares about. God cares about what happens in city services and garbage collection and the people who collect it. God cares about bankers, doctors, nurses, and teachers. There’s not one thing in all creation that isn’t one of the things that God is wanting to put together. This means that the stuff that we are doing daily, the stuff that we sometimes think of is not God stuff, actually is God stuff.”

Roberts concluded that “God has decided to write us into the story.” “God was glad—and is glad—to make that plan known to us. Why? Yes, so we can marvel at the goodness and grace and mercies of God, but also so we can begin to participate in it.”

After participants enjoyed dinner and community building in the church’s Loudon Hall, named for its current pastor, the Rev. Dr. John B. “Mike” Loudon, they gathered in the sanctuary for evening worship.

Prior to preaching his sermon entitled, “You Have the Power,” Barnes told the gathering that the work of The Fellowship Community and the pursuit of its mission to seek Christ’s renewal of the church is critical.

“I’m in awe of how you spend your life,” Barnes told the gathering. 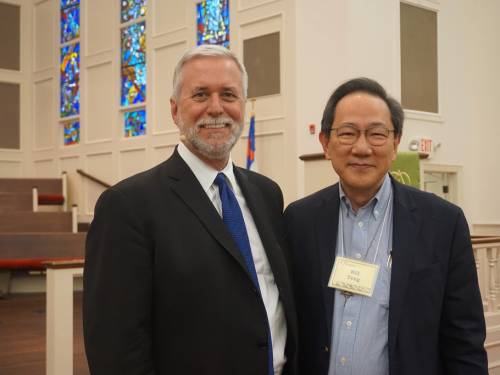 Barnes began his sermon, based on Psalm 133 and Acts 1:10-14, with the observation that people in the church are often uncomfortable with power.

“The church should be a critic of power, speak truth to power,” he said. “We church folks have a preference to hang out with the humble folks and feel good about the power we don’t have, but Jesus is not impressed. ‘You shall have power’ [he says in Acts 1:8]. You shall. As Presbyterians, we take ‘shall’ seriously. It means you have to do this one. You can ignore it, but you can’t have the Holy Spirit without having power. You are a people of power.”

He then explained the kind of power, “derived power,” that is most people’s experience.

“You get power from somebody else, someone who hires, promotes, or appoints you,” he said. “The problem with derived power is that you can lose it. The same people who give it can take it away. You can lose your job or the congregation can get tired of your three good sermons. That’s not what Jesus is talking about. This is the power that inflames you with passion for Christ’s mission in the world. It’s not derived, but charismatic power. It transforms us, changes us.”

Echoing themes and passages raised in the day’s earlier presentations, Barnes stated that the mission laid out by Christ is “to be my witnesses.”

“He didn’t say you shall receive power and fix the people that you love, he said, ‘You shall receive power and be my witnesses,’” said Barnes. “We are not the people that are supposed to do the saving. The last thing you want is for a witness to be creative—a witness talks about what the witness sees. Just look at the people to whom he gave the Great Commission, not to the powerful people, but a bunch of fishermen, not even good ones, and tax collectors, sinners, and some women who have no voice. They are filled with the Holy Spirit and are given the power to follow Christ into every corner of the world.”

In New Testament times, Barnes said that those who had “derived authority did everything they could to prevent this threatening message that people who have no power have all the power because they have the indwelling power of the Holy Spirit.”

Noting that the church just kept growing during its most severely persecuted years, Barnes observed that baptismal liturgies preserved from that time are “essentially funeral services.”

“Why were baptismal liturgies so focused on funerals,” he asked. “Because the church was persecuted. The early church wanted people to be unafraid, and the main way to be unafraid is to get the dying over with. You can’t scare dead people—that’s how the early church thought of themselves, that’s what made them powerful. I think we’ve lost something of that in our baptisms.” 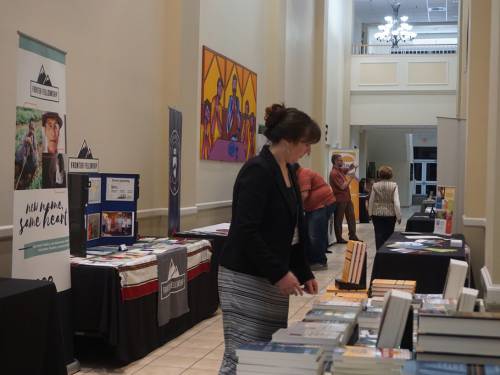 Barnes cited examples of those who were unafraid throughout centuries of the church’s history, including Pope Leo, who stood up to Attila the Hun’s planned invasion of Rome, Francis of Assisi, who gave away all of his wealth to be free, and Sojourner Truth, who said that if the church burned down she would “preach upon the ashes.”

Asking then what Christ’s modern-day disciples can do to nurture the power within them, Barnes said it’s best to do what the very first disciples did. “They went to the upper room and prayed,” he said.

“They didn’t get to the upper room and realize they had a strategy to develop—we gotta come up with a New Testament now, four Gospels—they’re just devoted to prayer,” he said. “We’re not even told what they’re praying for, they’re just enjoying the communion with the ascended Christ. When you just are devoted to the prayer itself, that the Son has given you the power, there is nothing else to live for but to talk about the mission of Christ in the world. That’s how you find your power to use your gifts.”