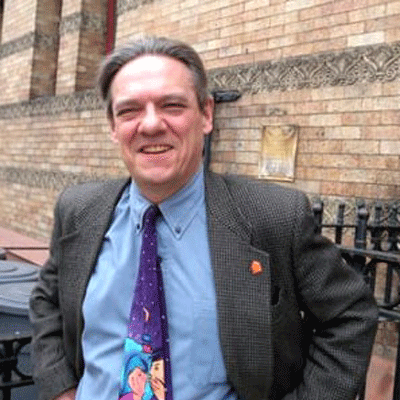 LOUISVILLE — Friends and family of a passionate and prophetic Presbyterian pastor gathered Saturday at Broadway Presbyterian Church in New York City to share their gratitude for the life, faith and hard work of the Rev. Dr. Robert Laird Brashear. Watch the 2-hour, 41-minute service here.

Brashear died in August at the age of 71. Just months before, he’d skillfully moderated the Rules of Discipline Committee during the 225th General Assembly, which with the approval of commissioners revised the denomination’s sexual harassment and sexual misconduct policies.

The New Yorker was a devoted Pittsburgh Pirates fan. His son, Daniel, told the story of how family members used tickets supplied by his father to watch Yankees outfielder Aaron Judge hit his 60th home run of the 2022 season at Yankee Stadium a month after his father’s death — against Brashear’s beloved Pirates.

Daniel took in the game dressed in a Roberto Clemente jersey and kept score on “an antique scorecard we found in dad’s apartment. I learned to score from him. He scored every game he ever went to.”

As “someone committed to justice and equality, of course keeping score was important to him,” Daniel Brashear said. When Judge hit his home run — teammate Giancarlo Stanton would later win the game, 9-8, with a grand slam — many Yankee fans had already made for the exits, Daniel noted. “It used to make my dad smile,” he said. “He’d say, ‘You just never know what will happen.’”

Rabbi Steven Blane, founder of the Jewish Spiritual Leaders Institute, said his longtime friend knew all the Hebrew to the prayers Blane offered, “and I went to Christmas Eve services at West-Park Presbyterian Church [the church Brashear served for 25 years], not something rabbis are known for,” according to Blane. “He was a pastor, teacher, conflict mediator and to me a fellow singer and songwriter.” Blane sang a few lines from his song “Spark,” which he and Brashear recorded weeks before Brashear’s death.

“I miss my friend very much, but his spark remains,” Blane said. “Godspeed, my friend. Your memory will certainly be a blessing.”

Brashear taught at the Newark School of Theology and was active in the Presbyterian Health, Education and Welfare Association. “Bob loved doing urban ministry. He loved this city. The city energized Bob. It didn’t tire him down,” said the Rev. Phil Tom, executive director of the International Council of Community Churches. “To Bob, the city was the embodiment of God’s beloved community, a kaleidoscope of God’s richness and diversity.”

“Bob was an advocate and a bit of a scrapper. He knew where the sausage was made and he made some of it himself,” said the Rev. Christian Iosso, interim pastor at First & Franklin Presbyterian Church in Baltimore and the former coordinator of Social Witness Policy for the PC(USA). “He served the church with his full head and heart, and he believed and lived God’s justice. At the end of the day in a very real way, he gave his life for it.”

“He managed to decenter himself and at the same time was a fighter who labored day by day in God’s vineyard,” said the Rev. Chloe Breyer, executive director of The Interfaith Center of New York. “His curiosity and thick skin were gifts for New York City. God has found a place for Bob, and that is good news for all of us.”

“I’m not too sure how peaceful God will be with him being there, but he’s at rest,” said Father John P. Duffell, who preached at Brashear’s ordination in 1995. “He made a difference because he did what Jesus said you’re supposed to do: love one another as I have loved you.”

Ruling elders Marsha Flowers and Russ Jennings recalled Brashear’s service to the West-Park church. “No one went away [from the steps of the church] without Bob personally trying to get them help, and his track record connecting people with services is impressive,” Flowers said. “He was the anchor when our boat rocked. … As a preacher and a teacher he was spellbinding. Bible study with Bob was interesting, revealing and fun. We would have preferred to have him among us a lot longer.”

When Brashear decided to reboot his singing career following his retirement from ministry, Jennings became his graphic artist. “His songs are about holding onto integrity and plain old human decency and love,” Jennings said. “I saw his commitment to urban ministry in action,” especially Brashear’s work helping churches to support refugees and immigrants. “He was taken seriously by people with a big vision for how the world could be.”

The Rev. John R. Scotland, who retired from ministry a year ago and is vice president of PHEWA, said Brashear is proof that “God raises people up, and thankfully in our generation.”

“We were charged with dealing with racism and poverty in cities,” Scotland said, “and Bob responded better than anybody I know.”

The Rev. Chris Shelton, pastor of Broadway Presbyterian Church, offered a benediction that included these words: “It’s time to go — and that’s why you came here, to go, because you need to go. You need to go and live the life that you have been called to live. … You are all here because one life touched you. Look at what one life can do. So go and live your one life. Go and live in justice, in kindness, in mercy in all you do. And may the peace of God that passes all understanding keep your steps and every one of your breaths from now until we are all made one. Amen.”