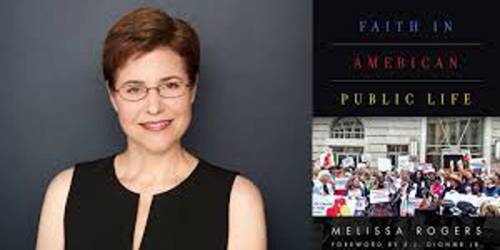 Melissa Rogers, former executive director of Faith-Based and Neighborhood Partnerships in the Obama administration, is shown with the cover of her new book, “Faith in American Public Life.” (Photo courtesy of Religion News Service)

“We make our own history,” Eleanor Roosevelt said. “The course of history is directed by the choices we make and our choices grow out of the ideas, the beliefs, the values, the dreams of the people. It is not so much the powerful leaders that determine our destiny as the much more powerful influence of the combined voice of the people themselves.”

The choices Americans make now about faith in public life will help to determine our course. With hate crimes and hostility toward certain faiths soaring, Americans have to decide whether we will tolerate this state of affairs or act to change it. If we truly believe all are created with equal dignity and worth, the answer is clear: Every human being deserves safety, security and religious liberty. And an attack on any faith must be treated as an attack against our own.

Especially under current circumstances, there should be no more tolerance for violent rhetoric or fear-mongering by candidates or government officials.

To be sure, government cannot stop every hate crime or heal all of our divisions. But leaders have a solemn obligation to do everything in their power to keep us safe and bring us together. Let us reaffirm George Washington’s words, written to the congregation of Touro Synagogue, that the United States of America should give “to bigotry no sanction, to persecution no assistance.”

These are among the values embodied in the First Amendment’s religion clauses, which serve as co-guarantors of religious liberty. In the face of efforts to dismantle or diminish it, Americans should register their support for a robust understanding of the Establishment Clause, one that applies to both the federal government and the governments of all 50 states.

In an America that is rapidly becoming more diverse, it is perhaps more important than ever that the government maintain neutrality toward religion, neither promoting nor denigrating faith, nor preferring one or more religions over others.

Strong support is also needed for robust protections for religious exercise, including appropriate religious exemptions. Exempting or accommodating religious individuals and institutions from laws and policies that conflict with their consciences is a time-­honored American tradition, one that plays a key role in recognizing human dignity and protecting inalienable rights.

This same tradition, however, has also taken seriously the burdens that religious exemptions place on individuals who do not benefit from them, and coexisted with robust protections for other human and civil rights. It has also acknowledged distinctions between the commercial and nonprofit spheres.

Making lasting progress on issues like these will require renewed efforts to bring diverse Americans of good faith together to listen to one another and seek common ground. That will not resolve all of our differences, but it will make our conversations and our country better.

In the recent past, presidents have called on Americans of vastly different political and theological stripes to seek common ground, and those efforts have borne fruit. Such initiatives have produced consensus guidance on current law regarding religious expression in public schools and the federal workplace. Another initiative produced consensus recommendations for strengthening the partnerships the government forms with faith-­based and other community organizations to serve people in need. This common­-ground tradition needs to be revived.

Another piece of common­-ground work should be rebuilding the U.S. refugee admissions and resettlement system.

Refugees are individuals who are fleeing persecution, including persecution for their faith or beliefs. Every year, the president, in consultation with Congress, sets the ceiling for the number of refugees who can be admitted to our country. Once refugees undergo a rigorous series of security checks, they are resettled by nongovernmental groups, including many faith-based groups.

Until a few years ago, the refugee admissions and resettlement programs had been treasured and strengthened by presidents of both parties. Participating in a robust, global system of refugee resettlement has helped the United States to make good on its promise to protect human rights and to prevent crises and conflicts around the world.

Since 2017, however, the resettlement program has been dismantled, and the ceiling for refugees has been driven to a historic low. Leaders from across the political and religious spectrum have called for the refugee admissions and resettlement programs to be restored, noting that the United States can be both secure and compassionate.

Restoration of the refugee resettlement program should be part of a larger plan for renewed cooperation between government and a wide range of religious and humanitarian leaders.

The Constitution permits governmental and willing religious leaders to work together to promote the common good. Common sense requires it. To conquer scourges like the Ebola and Zika viruses, end global poverty, promote racial justice, advance maternal and child health, counter violent extremism, make peace around the world and slow the climate change that threatens especially the poorest among us, government should collaborate with civil society organizations, including interested religious organizations. Such collaboration ought to be prioritized and always conducted in a manner consistent with the Constitution.

(Melissa Rogers served as special assistant to President Barack Obama and as executive director of the White House Office of Faith-Based and Neighborhood Partnerships (2013-2017). She is now a visiting professor at Wake Forest University’s School of Divinity. This article is adapted from her new book, “Faith in American Public Life.” Copyright © 2019 by Baylor University Press. Reprinted by arrangement with Baylor University Press. All rights reserved. The views expressed in this commentary do not necessarily represent those of Religion News Service.)