Mission co-workers and global partners report they are safe 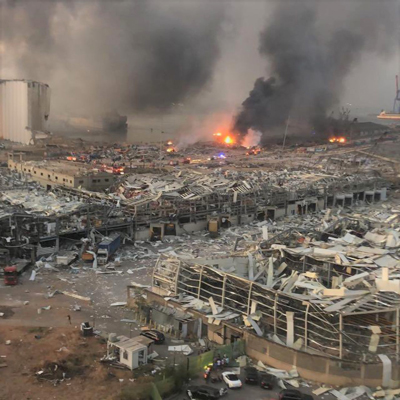 A view of the severely damaged port area in Beirut, Lebanon. (Photo provided to the Rev. Elmarie Parker)

LOUISVILLE — A massive explosion in Beirut, Lebanon on Tuesday has left at least 100 dead and more than 4,000 people wounded. The cause is still under investigation.

Mission co-worker and World Mission’s regional liaison for Lebanon, Syria and Iraq, the Rev. Elmarie Parker, has been coordinating with partners in Beirut. She has been sheltering-in-place in Oregon since March. Her husband and fellow-mission co-worker, the Rev. Scott Parker, was in Beirut, where he is sheltering-in-place and escaped injury. Global partners in Beirut have reported property damage but no deaths.

Elmarie Parker was contacted Tuesday by the Rev. Joseph Kassab, secretary general of the National Evangelical Synod of Syria and Lebanon (NESSL), who reported that there is some minor damage to their building, but no injuries. He had received no reports of injuries in synod churches, but the information is coming in gradually.

“If there’s one thing that the people in Lebanon excel in (and there is more than one thing, for sure), it is being in touch with each other,” Elmarie Parker said. “So, the networks are all going full speed in terms of following up with each other.” 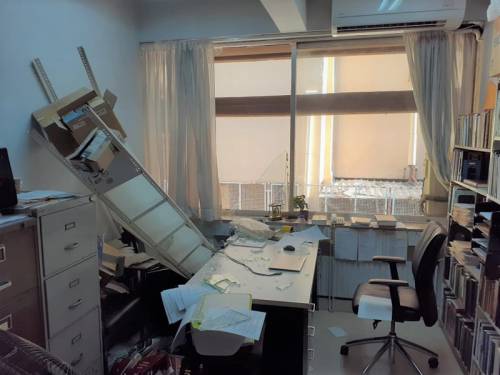 Offices of the Near East School of Theology about 10 minutes from the blast site. (Photo provided by the National Evangelical Synod of Syria and Lebanon)

An update from the Near East School of Theology (NEST), about 10 minutes from the blast site, reported that all the glass in the windows and doors were shattered, but no one was injured. Nearby Haigazian University sent a similar report. Blessed School, where Scott Parker volunteers, sustained heavy building damage, but all staff and students are safe. The Jinishian Memorial Program building was damaged, but there were no injuries.

“From another partner I’ve heard that American University Hospital and others in the Beirut area have been heavily damaged in their buildings and patients injured from flying glass, so it is hard for these hospitals to respond to the needs of patients newly arriving with injuries,” said Elmarie Parker.

Lebanese officials have not yet issued an official cause for the disaster. But the primary focus now is nearly 2,800 metric tons of explosive ammonium nitrate that was stored at a warehouse in the city’s port.

“We’ve got stay-at-home orders because of the spread of chemicals through the air,” wrote Scott Parker on Facebook. “Please pray for the vulnerable, and the hospital and rescue workers and all who are helping those in need.”

Presbyterian Disaster Assistance (PDA) is in touch with its partners in Lebanon and will be sending a solidarity grant to support the humanitarian assistance in the aftermath of the explosion. The Rev. Dr. Laurie Kraus, PDA director, said, “The citizens of Beirut and Lebanon have been hosting and supporting millions of refugees since the war in Syria began in 2012, and their economy and stability have been challenged by rampant inflation, high unemployment and currency devaluation — and now this terrifying and catastrophic explosion that has killed and injured many, and rocked the capital.”