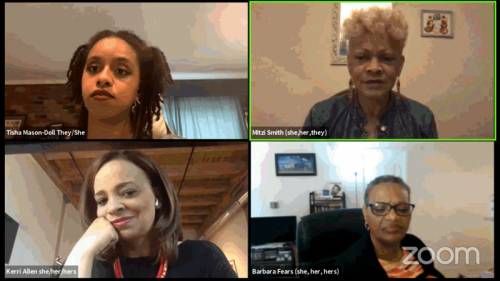 A discussion of toxic theology was the fourth in a series of five webinars from the Task Force on the Disparities of Black Women & Girls.

LEXINGTON, Ky. — Thursday night’s webinar from the Task Force for the Disparities of Black Women & Girls spent nearly half an hour in a lively discussion about how toxic theology has been advanced by history, culture, and even seminaries when the Rev. Dr. Mitzi Smith zeroed in on another culprit.

“Toxic theology is not external to the Bible,” the speaker, Biblical scholar, author, and founder and President of Living in Full Empowerment said. “A lot of it that we get comes out of the Bible, is in the Bible, and you can’t disregard the connection between the Bible and culture, religion and culture.

“The Bible invites us to think in binaries and to ignore those things outside of the binaries. … In the Bible there are virgins and whores. That thinking was not created by the Bible. But the writers of the Bible were part of that culture, and they did not critique it either. And we then get it — it doesn’t drop out of the sky, out of heaven — and we build our theology on the toxic theologies in the Bible.”

The Rev. Kerri Allen, moderator of the discussion, noted that there are a lot of conversations about deconstructing interpretations of the Bible. “We can’t just, like do a reinterpretation in order to make the Bible say something that it doesn’t say,” Allen said. “So the Bible says what it says.”

Thursday’s conversation was the penultimate episode in the five-part series that has thus far covered reproductive justice, the adultification of girls, and the task force itself, which was formed at the 224th General Assembly to study and make recommendations to the church on how the church can impact and engage the issue of the disparities of Black women and girls. The final episode will focus on LGBTQIA issues at 5:30 p.m. EDT on June 24 on the Gender Justice PC(USA) Facebook page and the main PC(USA) Facebook page.

Click here to see the Toxic Theology webinar in its entirety.

Allen, also Moderator of the Task Force, started the conversation asking all three participants, “What does toxic theology mean to you as a Black person?”

“Toxic theologies are beliefs that adversely affect healthy identity formation for Black women and girls,” said Rev. Dr. Barbara Fears, Assistant Professor of Religious Education at the Howard University Divinity School. “And they correspond to behaviors that hinder our full participation in the church and in society, and our pursuit of our dreams and divine purpose.”

Tisha Mason-Doll, who holds a masters in divinity from McCormick Theological Seminary in Chicago, defined it in terms of “Mary vs. me.”

“Growing up, I’ve been given these ideas of what it means to be a perfect woman,” they said. “But then culturally and societally, it’s hard to fit those norms. You can never be good enough or perfect enough. And I always felt that faith preyed on my identity as a female body person, especially a female body person who sits outside gender norms and stereotypes.”

Mason-Doll said they has to carefully construct a feminine identity in a theological world that often views aspects of femininity as bad.

Smith said Mason-Doll’s experience reflects the experiences of many women she’s known and said toxic theology, “resists or reinscribes oppression, resists critique. We construct theology and I think there are even theologies that we embrace ourselves, maybe not so aware of them because we are in spaces or have not completely liberated ourselves from theological bubbles that are toxic. They resist self reflection.”

The panelists talked about their encounters with toxic theologies in a variety of settings and how they manifest in teachings that favor concepts such as nuclear families — one man, one woman and children — while ignoring the fact that that is not the reality for many people. They also pointed to its roots in white supremacy, as Christianity was used to affirm slavery, even in the Presbyterian Church.

“Presbyterians were among the most prolific slave holders,” Allen said. “So, the institutions where we serve, the institutions where we work, our churches, our seminaries, have slave money and so benefited from the capital that was birthed from Black women’s worlds. That’s the reality that we have to deal with. And what we do now with that capital, with that privilege that comes from Black women, is now one of the things that we have to reckon with.

“We can’t just say that because we’re progressive that we rid ourselves of all of that, because that’s part of our history, and we have to reconcile that through repentance and reparation.”

The panelists returned several times to the challenges of being a Black woman in a church and a culture whose concepts of Black women were formed and informed by Western colonial and slave-holding cultures.

Allen also asked the panel to comment on what “liberation” meant to them and what it would look like for Black women and girls.

Fears reflected on how women are often seen as the servants, even in biblical stories involving Jesus, creating a perception that women should always be serving others.

“Liberation for me,” she said, “I think that’s finding our voice and prioritizing ourselves, our needs, our goals, our divine call, and our perception … in conversation with accountability partners, family and friends. But we keep doing stuff for others, sometimes at our own expense. And that’s what I’m suggesting: We need to break that.”

Mason-Doll said that Black women are the most silenced in culture, and they need to break free from that.

“Liberation is not being afraid of living openly,” they said. “I’m here. I’m staying. I will ensure my voice is heard before I am moved out of the room.”

Whatever they achieve, Mason-Doll said, “I will always be viewed as a Black person first.”

Smith said she saw liberation as “the freedom to be human and all that that means.” She said there’s a constant message that “we still have got to be better, we’ve got to be perfect, always polished, always saying the right thing, right? We don’t get passes. We need to give ourselves a pass and each other passes.

“We don’t arrive at liberation. It’s always becoming, just like you’re always stuck being charged to step into our humaneness and that means imperfection. That means giving ourselves grace and everybody else grace.”

Allen summed up that section of the conversation reflecting that from Mason-Doll and Smith, “I heard to basically embrace the angry Black woman trope and to be free from it at the same time.”

The panelists said that anger is good and necessary given the many challenges people who are Black, particularly Black women and girls, face today. While a part of toxic theology includes ways Jesus is portrayed as acting in the Bible, Mason-Doll said he is an example of the anger than is necessary in an unjust world.

“Jesus made it a mission of this life to make people uncomfortable,” Mason-Doll said. “I as a professing Christian, baptized into this faith and faith in Jesus Christ, need to be willing to do that as well.”