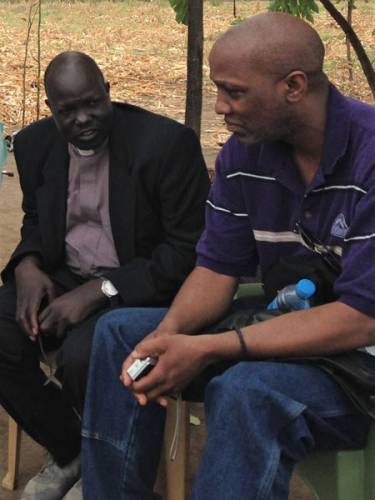 The Stated Clerk of the General Assembly of the Presbyterian Church (U.S.A.), the Rev. Dr. J. Herbert Nelson, II, at right, speaks with the Rev. John Yor, Presbyterian Church of South Sudan general secretary, during a 2016 visit to Pochalla, in Jonglei State, where the inter-ethnic conflict is raging. (Photo by the Rev. Debbie Braaksma)

LOUISVILLE — The Rev. John Yor, General Secretary of the Presbyterian Church of South Sudan (PCOSS), is asking U.S. Presbyterians for prayers as violence escalates in the Jonglei State in the northeastern part of the country between the Nuer and Murle ethnic groups.

There have also been outbreaks of violence in South Sudan’s Lakes State and in Lainya County near the capital, Juba.

“Rev. Yor told me the National Unity Government is facing a political challenge, which has escalated the violence,” Braaksma said. The governors of the 10 states have not been appointed, and the resulting power vacuum has created “a loophole for tribal conflict and inter-ethnic fighting,” she said.

Yor told Braaksma that hundreds of Nuer and Murle civilians are dead, but the official death count isn’t accurate. Many of the dead who had fled into the bush have thus far been omitted from official figures. The injured are in hospitals in Juba, Akobo and Leer.

On Friday, there will be a meeting of PCOSS-trained peace mediators, Yor said. The meeting will focus on the conflict between the two tribes. He estimates that 90 percent are Presbyterians, so he believes the Church must create a concrete plan to stop the violence. “We need to try to be involved fully to mediate the conflict,” he told Braaksma.

Like every other region of the world, the COVID-19 pandemic is exacerbating already serious problems. The virus is spreading quickly, more than 100 cases per day. So far there are 481 confirmed cases. The demands on the fragile health care system have hampered the ability to treat those who have suffered gunshots and other injuries as a result of the violence.

“There is no protection,” Yor said. “Many are not able to buy masks. They are too expensive. Everyone is in danger.” He said that even he, a church leader, did not have access to a mask.

In addition to the violence, an economic crisis and famine are looming. Many have not received a salary for up to five months and crops have not been planted because people have forced to flee their land.

South Sudan’s civil war is now in its sixth year, creating the worst refugee crisis in Africa since the Rwandan genocide 26 years ago. Nearly 400,000 people have died in the civil war.

Aid group Médecins Sans Frontières (Doctors Without Borders) reported it had lost a South Sudanese staff member and two others were injured in the clashes. A South Sudan Red Cross volunteer was also killed.

All mission co-workers serving in South Sudan are back in the United States, sheltering in place during the COVID-19 pandemic, but staying in close touch and continuing to work with PC(USA) partners. 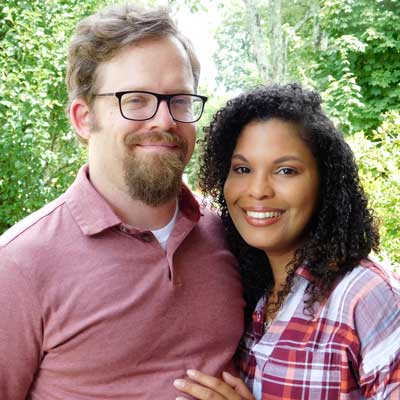