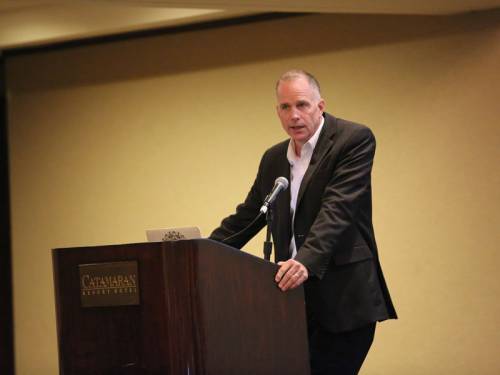 SAN DIEGO — In his session titled “Endowments 101” at the Stewardship Kaleidoscope gathering in San Diego last week, Stephen Keizer, Vice President of Ministry Relations at the Presbyterian Foundation, taught key concepts around church endowments including their inception, management and eventual use.

But what makes a church member want to support an endowment? Keizer walked the audience through key motivations for those who support endowments.

Above all, donors want to give to something that makes an impact. Churches should identify three to four mission priorities that are “above and beyond” the church’s normal budget. Any asks made of church members should center on those priorities. “Don’t create an endowment just to have one,” Keizer says. “That does not motivate your church members or invite them to participate.”

To communicate what those priorities are, develop a case for support, which is a document something like an annual report that lays out priorities and reasons for supporting those projects.

Detail what the vision will be for the future with those priorities realized and fully funded. Imagine how your church or ministry might look in five years, 15 years, 50 years — or in the far future — and how donations can support that vision.

Your vision and mission should be theologically sound. Study how the teachings of Christ might prompt the growth of this mission and ministry. Use those words in your communications about the endowment, Keizer says.

Many donors are financially savvy, and they want to know that their gifts will be used appropriately and wisely, Keizer said. The first step is to create an endowment policy that clearly states operating principles.

Other policies that should be created are:

“It is important for your church staff and session to understand who will make determinations about significant gifts and how the funds for the endowment are invested,” Keizer says. “You want to have everyone on the same page. Showing your church members that you’ve thought through these matters indicates financial health.”

A successful endowment campaign is always led by those who are in leadership in the church. The lay leaders in the congregation, including those on the session and those serving on the endowment committee, must contribute and must be willing to talk about their gift.

The pastor of the congregation needs to know about the plan to build an endowment. Ideally, the pastor would support it from the pulpit and preach about it on Sundays.

A best practice would be to create a marketing plan, which can be simple but should outline the ways in which you will promote the endowment to the congregation and encourage contributions. This should include a thank you event when the endowment campaign is complete.

Lastly, you’ll want to be sure to celebrate the times when the endowment has made a difference in the congregation. Be sure to tell your church when the endowment was used for the work and ministry of the church so they can see that their past and future gifts are effective.

There are two ways to grow an endowment fund: receive new gifts to the endowment and engage the congregation in a campaign of awareness and promotion, Keizer says.  “The number one reason a person does not leave a gift to the church is that they were not asked,” he said, noting it takes, on average, seven mentions of the legacy fund before people are aware of its existence.

Statistics gathered by the Presbyterian Foundation show that 64 percent of Presbyterians have a will, but only eight percent have left something to the church. The average end-of-life gift from Presbyterians is approximately $50,000.

As a means to increase the number of people leaving gifts to the endowment or making contributions, he suggested a 12-4-1 planned giving strategy that includes publishing 12 church newsletter articles per year, holding four information sessions and establishing one legacy giving Sunday per year. “Establishing a regular pattern of communication about legacy giving is a wonderful way to remind your congregation of the ways in which they can support their church far into the future,” Keizer says. “You may very well find that church members actually welcome the conversation and feel relieved to have direction in what can often be a difficult topic.”

The Presbyterian Foundation has resources that can help you create and grow your endowment.

The starting point should be your Ministry Relations Officer. MROs work for the Foundation and are located throughout the country to help local congregations with stewardship, planned giving, financial sustainability and similar needs.

Composing a Legacy, the Presbyterian Foundation’s workbook for planned giving, is also available, as well as the Planned Giving Navigator, a web site with a variety of tools for churches and ministries that want to establish or have established planned giving programs.

“There is no reason to go this alone or start from scratch,” Keizer says. “We’re here to help, and we’ve already done some of the work for you.”

Robyn Davis Sekula is Vice President of Communications and Marketing at the Presbyterian Foundation. You can reach her at (502) 569-5101 or robyn.sekula@presbyterianfoundation.org.