Coffee shop is an instrument for social change, advocacy and education 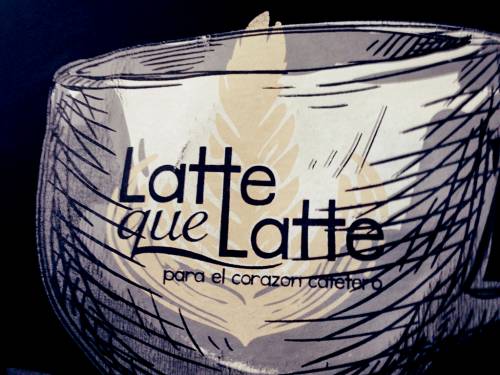 SAN JUAN, Puerto Rico – A trilogy of ordinary people is creating some extraordinary results in a San Juan neighborhood.

This was beautifully illustrated by three special guests of the World Mission Competencies in Domestic Ministry ministerial team during the Presbyterian Mission Agency Board meeting in San Juan last week. The Rev. Nancy Ramsay chairs the committee.

The team was hosted at Iglesia Presbiteriana en Camarones by San Juan pastor Raul Santiago- Rivera who invited the speakers to illustrate the way members of San Juan community are coming together to live out their faith, embrace diversity and advocate for social justice. Guests included the Rev. Dr. Agustina Luvis, professor of theology at Evangelical Seminary of San Juan; the Rev. Arelis Cardona, pastor of Monteflores Presbyterian Church; and Ruling Elder Amilcar Cotto, a local entrepreneur. Cotto knows the other two well. Luvis was his seminary professor and Cardona is his pastor. Santiago-Rivera has been his friend since he attended seminary.

Cotto owns “Latte que Latte” coffee shop. Just two months ago he opened a second location, Café Lab at Guaynabo. It’s called Café Lab because it’s a social experiment. He uses these two small businesses as a platform for advocacy and social change, and according to many, he serves a pretty good cup of coffee—about 3,500 of them each week. He completed a degree in religious studies but was forced to drop out of seminary due to a family illness. So he began to look for other ways to live out his faith. The path he chose was not at all surprising to his longtime friend.

“He carries Christ’s theology and gospel wherever he goes,” Santiago-Rivera said. “I truly believe Amilcar preaches every day. He just does not preach from behind a pulpit.”

Cotto fashioned his business model around Biblical values. For instance, he offers jobs to those who are struggling with addiction, unemployment and homelessness. He’s proud that the coffee shop can help people faster than the government can. One employee who was homeless for 15 years had a permanent place to live within two weeks of starting work at Latte que Latte.

And then there’s the “Coffee Forward” program. Customers can buy a cup of coffee for themselves and pay for another cup for someone who can’t afford it. When they don’t come in for the coffee, Cotto takes it to the neighborhood and uses it as a way to begin conversations and witness his faith. He calls it his therapy. Whatever money is left over is used to provide food for those who need it. 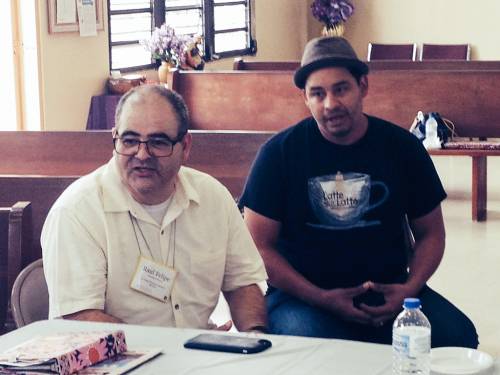 Ruling Elder Amilcar Cotto (right) sits with his friend Raul Santiago-Rivera. Both preach but just one of them does it from a pulpit. (Photo by Kathy Melvin)

Cotto also started the “Pinky Promise” program where he teaches others how to start successful businesses and how to become advocates of change. Most recently he brought together artists to do free performances around social justice themes. He participates in the program when he is not somewhere else on the island advocating for the marginalized or the environment. He nearly missed the meeting of the PMA committee because he was protesting environmental harms caused by coal ash in the South.

Cotto is a ruling elder at Ramon Olivo Memorial Presbyterian Church—also known as Monteflores. When a woman in the community became a victim of domestic violence, the church began a program to counsel, educate and work toward prevention. She is a leader of the “Ni una galleta mas” (no more hitting) initiative against domestic violence. Using his coffee shop as a platform, Cotto began community outreach. He serves cookies he calls “galletas” (a play on words) that have become a fundraising tool for the program. He gives customers the first one free, but additional ones can be purchased. That money is used to fund education and advocacy.

Additionally, Monteflores hosts the only Korean Presbyterian Church on the island. It is located in a primarily Dominican neighborhood. Some neighbors are undocumented. The fear of being deported is often used as a threat to victims of domestic violence. If they report the incident of abuse or leave the household, they are afraid they will be taken from their families and sent back to the Dominican Republic. The program doesn’t just focus on the adults. It also offers counseling to help the children thrive during a difficult time for their family.

Cotto not only learned to embrace diversity from his church and pastor, but also the woman seated next to him, his former theology instructor, Luvis. She serves as professor of systematic, feminist and Caribbean theology at Evangelical Seminary in San Juan. Luvis is a Pentecostal minister ordained to teach.

“We must recognize and respect others. It’s really the process of humanization,” Luvis said. “We live in a world that is inter-religious and inter-ethnic. We need to work toward embracing diversity. That’s the thing I want students in my classes to understand. This allows them to affirm the community of God in every community and every culture. God saves in many ways. All cultures have a place in God’s heart.”