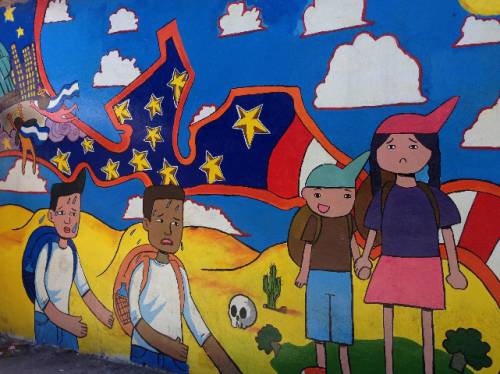 LOUISVILLE — At a critical juncture in the dialogue around immigration policies, the Presbyterian Church (U.S.A.) is working to shift the narrative from a legal perspective to a human one.

Tracey King-Ortega, Presbyterian mission co-worker in Nicaragua and regional liaison for Central America, has been in conversation with global partners, reminding us that what happens in the U.S. has a ripple effect around the world.

“Our partners are telling us that new crises are being created by U.S. policy, specifically increased deportations,” she said. “In El Salvador, where they are already burdened with high levels of violence and unemployment, they are now having to care for this new influx of people that are struggling to identify with a country they hardly know. Our partners are asking us to help them accompany this population but to also look at the policies that are generating this situation and work to change them.”

The urge to action from partners increased when the Trump administration announced its decision to end the Deferred Action for Childhood Arrivals program (DACA) for about 690,000 individuals (as of September 2017) who were brought into the U.S. by their parents without documentation. President Trump did, however, give Congress a window of opportunity to save the program, but not without caveats.

Amanda Craft, a global mission professional, now manager for advocacy in the office of immigration issues in the Presbyterian Office of the General Assembly (OGA), says the administration’s demands are unrealistic. “The administration’s wish list includes $1.6 billion in the 2018 fiscal year budget for a wall along the US/Mexican border that will cost $12-$15 billion to complete, a crackdown on the influx of Central American minors and curbs on federal grants to sanctuary cities,” she said. “The list goes far beyond what is reasonable and fails to represent any attempt at compromise.”

Without congressional action, DACA will no longer accept new applications or renewals beginning March 2018. El Salvador is the second most benefited country, with 30,000 youth in the program. Having migrated as children, many don’t remember El Salvador and have no cultural connection with the country. They would be sent back to the most violent country in the world, flooding El Salvador with thousands of people who have no homes, no jobs, and no way of supporting themselves in an already difficult economy.

“We have six months to act and lobby,” said Santiago Flores, pastor of the Reformed Calvinist Church of El Salvador. “We are pleased with the position of the PC(USA). We must fight so that racism does not become institutionalized in the U.S. and do what we can do together and in each of our countries with the corresponding authorities.”

The PC(USA) is working with the denomination to develop a plan to assist deportees with basic needs, as well as offering pastoral support and care for those who may be grieving family they were forced to leave behind.

King-Ortega urged both prayer and advocacy. “The PCUSA has a rich history of partnership in El Salvador. These are our brothers and sisters in Christ asking us to work with them in a variety of ways. And truth be told, if you unpack the complexities of the push factors for migration and now these secondary challenges and traumas triggered by unjust US immigration policy, you’ll see that we also have a sordid history politically throughout the region. I believe as Christians and as Americans, we are morally obligated to respond.”

Eli Cook, rector of the Latin American Biblical University in Costa Rica also responded. “We, the Latin American Biblical University, join you in the struggle against all exclusion, discrimination and marginalization and any discourse that normalizes these positions. May God accompany and strengthen God’s diverse and multiple people in the defense of life.”

Central America is just one population affected by these immigration issues. Though not as large in numbers, there are many others around the world. At the 210-member Marturia Presbyterian Church in Rochester, New Hampshire, an Indonesian church, over half of the congregants are being threatened with deportation. They have been told that when they are called to their ICE appointments, they should show up with plane tickets in hand.

“These are human beings,” said Craft. “We go to church with these people. We sit together in the pews. They have become members, sometimes leaders of our communities. If we offer them a path to citizenship, we move people out of the underground system to better jobs, paying taxes and utilizing their skills in a just and fair way. This has been the success story of DACA.”

Another March deadline is approaching that could also tremendously impact some communities. For those living in the U.S. under TPS (Temporary Protected Status), time is up on March 9, 2018. TPS is offered to people after a disaster or crisis. There are about 300,000 people in the U.S. from 10 countries under the program. All are here legally and registered with the government, but there is no path to citizenship for them. Many have lived in the U.S. 20-30 years and now have little connection with their country of birth. About 195,000 TPS holders are from El Salvador.

Both King-Ortega and Craft encourage individuals, congregations, presbyteries and synods to learn more about immigration policy and pray as well as act. At the moderator’s conference in mid-October, the PC(USA) introduced a film called The Genesis of Exodus, which addresses the root causes of migration in Central America. The website includes a story map that can be used as a study guide, https://genesisofexodusfilm.com/.

A good time to plan a conversation around immigration is October 29-November 4 when The Interfaith Immigration Coalition (IIC) is hosting a week of prayer. The PC(USA) is a member of the IIC, a partnership of faith-based organizations committed to advocating for comprehensive immigration reform that expresses fair and humane immigration laws and enforcement that reflect the mandate to welcome the stranger and treat all human beings with dignity and respect. Coalition members work together to advocate for just and equitable immigration policies, educate faith communities and serve immigrant populations around the country.

Craft said we must work for healthy changes in our immigration policy, remembering that we are challenged to see God’s image in everyone. “Jesus himself was a refugee,” she said. “This is part of our biblical history.

Many resources are available on the PC(USA) website and: