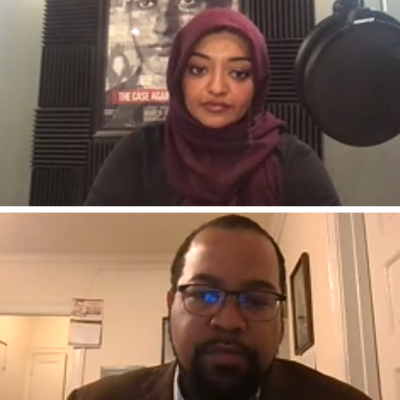 Rabia Chaudry, an attorney, documentary producer and New York Times bestselling author, joined John Thomas, editor of The Christian Recorder, on a panel Thursday about including underrepresented voices in the media. (Screenshot)

LOUISVILLE ­— An HBO documentary producer and the editor of an African American periodical offered cautionary advice Thursday about how to engage in authentic storytelling about marginalized groups, such as African Americans and Muslims.

Rabia Chaudry, a lawyer, podcaster and New York Times bestselling author, paired up with John Thomas, a political scientist and editor of an African American periodical called The Christian Recorder, for a virtual discussion called “Including Underrepresented Voices in the Media.” Watch the discussion here.

The discussion was part of a religion communicators convention convened by the Religion Communicators Council, the Associated Church Press and the Canadian Christian Communicators Association.

Thomas talked about the importance of not assuming one knows everything about the Black church without doing the proper legwork.

“We are a very diverse community,” Thomas said. “There are at least a dozen major Black denominations, and just because you watched Henry Louis Gates’ documentary does not mean you know everything about the Black church.”

Thomas also expressed frustration with storytellers who don’t make sufficient effort to find good sources or who keep running back to the same person.

When asked about narratives that need to be “undone,” Chaudry, who is a Southeast Asian Muslim woman, talked about fighting stereotypes.

“I think one of the most overarching ones is the otherness of Muslims, the foreignness of Muslims in this country … which is a complete rewriting of history,” she said. “Muslims have been in this country for hundreds of years. Muslims came here as slaves from Africa and West Africa. Even the State Department says up to a third of those slaves probably were Muslim.”

Earlier in the program, she had discussed life after 9/11, when Muslims were put on the defensive.

Despite trying to “defend our community and to establish ourselves as part of the fabric of this nation and as an important part, a productive part,” the efforts were largely unsuccessful, she said. “The further out we moved, year by year, from 9/11, the more anti-Muslim sentiment actually grew in this country.”

The lesson learned? “We couldn’t fight people’s feelings with our facts,” she said, “and so I learned that if you want to be an advocate, if you want to be a good attorney, if you just want to fairly represent your community in the media, you have to learn to tell stories. And so I have become a storyteller.”

Chaudry is well-known for projects related to her longtime efforts to exonerate Adnan Syed, a family friend who was convicted in 2000 of the murder of his former girlfriend, Hae Min Lee, a popular high school student in Maryland.

The case spawned a massively popular podcast, “Serial,” by the creators of “This American Life,” and Chaudry’s bestseller, “Adnan’s Story: The Search for Truth and Justice After Serial.” Chaudry also has done multiple podcasts and was executive producer of a four-part HBO documentary, “The Case Against Adnan Syed.”

“His conviction was overturned twice. It was reinstated. But it doesn’t diminish from the fact that we still have a robust legal and investigative team and we’re not done fighting,” she said. “We’re not going to stop until we get him home.”

Advocacy work also is something the 2.5 million-member AME Church is passionate about, Thomas noted.

“Sometimes the norm of a Black church is praising and going home,” he said. “The AME Church has always been involved in politics, or political advocacy … and that was the attraction that brought many people to our church,” even outside of the United States.

In the same vein, The Christian Recorder strives to highlight the work of church members like Ella Jones, who became the first Black mayor of Ferguson, Missouri, last year.