…be led forth in peace. (Isaiah 55:12). Support to the Peace & Global Witness Offering.
Make A Donation Click Here >
Home › Committee on the Office of the General Assembly begins spring meeting

Presbytery of San Juan provides hospitality, glimpses into its ministries 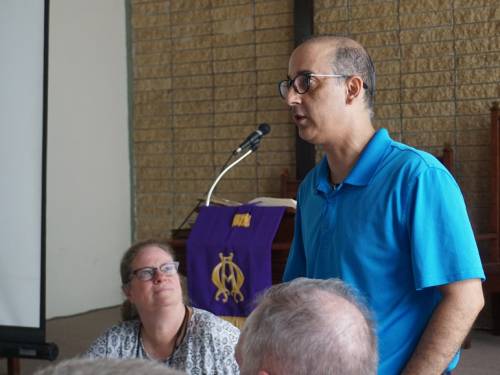 SAN JUAN, Puerto Rico – With the hospitality of the leaders and churches of the Presbytery of San Juan at the forefront and an unparalleled view of Old San Juan Harbor as a backdrop, the Committee on the Office of the General Assembly (COGA) opened its spring meeting here on Tuesday, March 21.

The Rev. Dr. Barbara Gaddis, a teaching elder member of North Central Iowa Presbytery and Moderator of COGA, began the opening plenary session by expressing thanks for the presbytery’s warm welcome. In addition to other thoughtful touches, members and staff of the Presbytery of San Juan greeted COGA members upon their arrival in San Juan on March 20 with a bag of traditional Puerto Rican candies and a card emblazoned with the PC(USA) seal and the word bienvenidos, Spanish for welcome.

As a part of its three-day meeting, March 21–23, COGA members will have an opportunity to share in community conversation and worship jointly with members of the Presbyterian Mission Agency Board (PMAB), which is meeting concurrently in San Juan, March 22–24.

The Rev. Stephanie Anthony, COGA member and head pastor of the Fox Valley Presbyterian Church, Geneva, Illinois, set the tone for the meeting by focusing her opening worship on Jeremiah 7:21-26, followed by a labyrinth exercise on paper and a time of prayer. “I’m thinking about ‘stiff-necked’,” said Anthony, citing verse 26, “and how easy it is to become entrenched in our positions rather than seeking God’s will.” 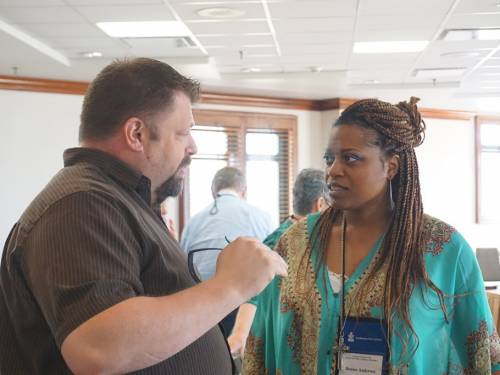 Following a brief report by Gaddis in which she sought COGA members’ input on filling the vacancy on COGA created by the Rev. Lemuel García upon joining the staff of the Presbyterian Mission Agency, the Rev. Denise Anderson, Co-Moderator of the 222nd General Assembly (2016), offered a joint report on behalf of herself and PC(USA) Co-Moderator the Rev. Jan Edmiston.

In her highlights, Anderson emphasized a new, grassroots, ecumenical push to reignite the Rev. Dr. Martin Luther King Jr.’s Poor People’s Campaign—an initiative he was working on at time of his assassination—to alleviate poverty.

“We are in a kairos moment in our nation right now,” said Anderson, “where we really have to live into our ideals as people of God.”

In the opening plenary, COGA also: 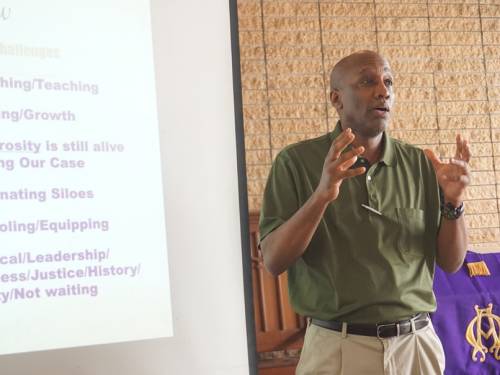 For the second plenary, COGA members took a short walk to convene at the nearby Iglesia Presbiteriana Old San Juan (Hugh O’Neill Memorial Presbyterian Church), where they were welcomed by the Rev. Luis Ocasio, the church’s pastor and the current Moderator of the Presbytery of San Juan. Ocasio presented a brief history of the congregation, which—organized in 1904—is the presbytery’s oldest church still serving in the same location.

In the afternoon plenary, COGA:

COGA will reconvene on the morning of March 22 in joint session with the Presbyterian Mission Agency Board, followed by lunch and fellowship. The business meetings of both groups will then continue separately until they reconvene in the evening for joint worship at the Iglesia Presbiteriana de Puerto Nuevo.