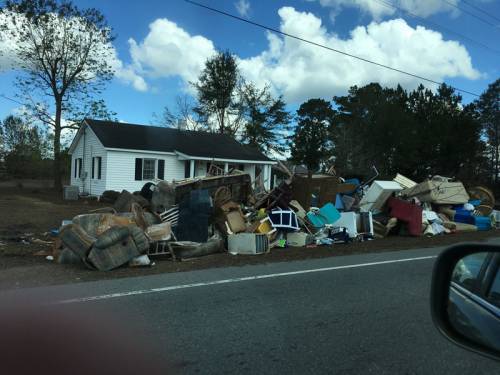 A pile of debris sits on the side of Highway 41 just east of Wallace, N.C., in a community called North East. This is the scene on both sides of the road for about 11 miles. Phil Gladden

LOUISVILLE – Church congregations throughout Coastal Carolina Presbytery are struggling to repair their own buildings and meet the many needs in their congregations and communities following Hurricane Florence.

Gladden believes that with some extra support, churches, their congregations and communities can get back on their feet faster. The Presbytery started an online giving fund with the Presbyterian Foundation this week to receive gifts so that they can help churches get space ready for work groups and distribute supplies to those who need them. Presbyterian Disaster Assistance (PDA) has also been working with the Presbytery to assist with strategy, organization and logistics of recovery. Gladden said the Presbytery is grateful for PDA’s help.

The online fund established by Coastal Carolina Presbytery will enable it to accept gifts quickly and will hopefully stave off well-intentioned efforts to send “stuff,” which can prove to be more of a burden than a help. Money gives the presbytery flexibility to meet immediate needs. If you would like to support the presbytery, click here.

Monetary donations can also be an economic boost, especially in small, rural towns. “If the donations can be spent in the local communities, it can help the local economy in the areas that have been damaged so badly,” Nancy Gladden said.

A closer look at congregations

Several eastern North Carolina PC(USA) pastors provided a closer look at the needs in their churches and communities. In Morehead City, the Rev. Tim Havlicek, pastor of First Presbyterian Church, says the church itself sustained some water damage, but most of the church campus is dried out, mold eradicated and they’re holding services again. During the storm itself and after, the church housed homeless families, and it also took in some area residents after the storm whose homes had lost their roofs.

A month after the storm, the needs are still great, he said, but have shifted from shelter to sustenance. “There were food stations set up everywhere,” Havlicek said. “I didn’t realize that many of these folks don’t have transportation to get to the feeding stations and didn’t have awareness to get to them. When schools were still out, parents and guardians had to return to work, many at low-paying, hourly jobs that require their attendance to be paid. We discovered a lot of children who were dependent on low- and no-cost meals at the schools were at home alone with nothing to eat. We worked with the school system to identify areas where many of these children lived; then we collected kid friendly food and took it into the neighborhoods to distribute.”

Many of these families may not have insurance, or perhaps not enough to pay for damages. They may also still be recovering from other storms in the area. All those factors mean that their jobs are vital to their family’s survival.

First Presbyterian in Morehead City would like to host work teams, and Havlicek sees that as a next step for the church to aid in the long-term recovery. He is grateful to PDA for their help in assessing damage and determining next steps. “They were great to come quickly and meet with the pastors and churches to see how we were doing and tell us next steps,” Havlicek said. “Now we’re set up to meet with another response group. We would like to become a long-term recovery team site, and they’re coming to assess the situation and see if we have what it takes. We think we’re ready for it. They tell us it’s a huge responsibility.”

In Wallace, North Carolina, the Rev. Dr. Phil Gladden (known to locals as “Dr. Phil”) said that at least 35 members of his congregation, Wallace Presbyterian Church, lost their homes and everything in them when a nearby subdivision flooded. Gladden was in Zambia on sabbatical when Hurricane Florence began its slow march towards his home in Duplin County. He cut his trip and his sabbatical short, arriving home one hour before the hurricane hit. The Rev. Dr. Nancy Gladden of the Coastal Carolina Presbytery is his wife.

Having been through Hurricane Floyd in 1999, he knew what was coming, and he wanted to be there to help. As soon as the storm abated, he began texting and calling each member of his church to assess what they needed and how the church could help. “I guess one of the really humbling things to me is some of the people in our church who lost their homes were some of the first to step up to organize relief efforts to help other people,” Phil Gladden said. “That’s pretty awesome.”

Wilmington, North Carolina, was one of the largest cities hit hard by Florence. The Rev. Dr. Doug Cushing, pastor of The Bridge Presbyterian Church in nearby Leland said that his church is deeply involved in mission in the community, and is even more so post-Florence. His congregation is one of the 1001 New Worshiping Communities. 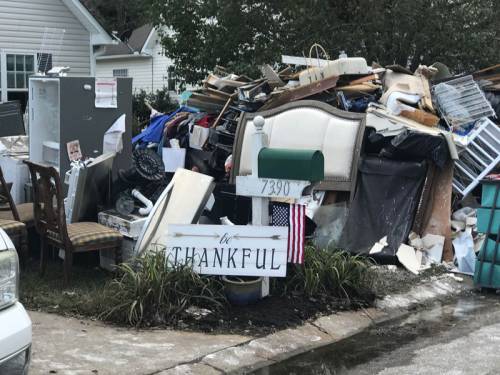 Debris sitting outside a home in North Carolina. Doug Cushing

“In our congregation — we call ourselves the blue tarp club — fences are down, trees are on houses, but no one lost their home,” Cushing said. “Physically we fared pretty well, but emotionally this has taken a great toll on us because of the devastation in our community.”

His church is currently collecting school supplies so that when schools do reopen, children can go back to learning with the items they need. The church also has a ministry crocheting sleeping mats for the homeless out of plastic bags. That work continues with more intensity. The church is also participating in twice-weekly food distributions to those recovering from Florence. And their praise band held a fundraiser at a local Irish pub, bringing in $8,000 to aid with recovery.

The hard part, he said, is waiting for the next stage of life post-Florence to begin. “So many people who have lost their homes are going through mold remediation, and until the mold is removed, it’s not safe for a lot of volunteers,” Cushing said. “It’s the in-between time.”

Robyn Davis Sekula serves as interim senior director of communications for the Presbyterian Foundation. She is a ruling elder in the PC(USA) and a member of Highland Presbyterian Church in Louisville. You can reach her at robynds@live.com.