Large influx of faith leaders is an encouragement to Native groups 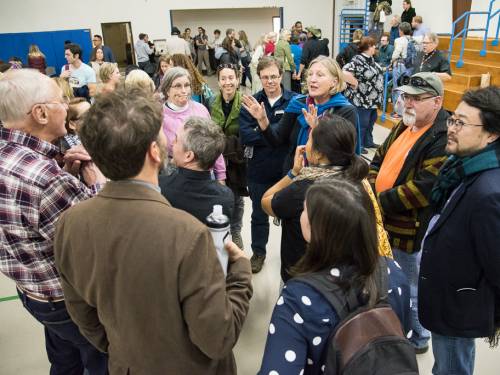 Sara Lisherness, director of Compassion, Peace and Justice ministries at the PC(USA), speaks to Presbyterian clergy and guests gathered at the clergy solidarity action for the Standing Rock Sioux protest of the Dakota Access Pipeline. (Photo by Gregg Brekke)

The gathering and impending justice action came together in just a few short days, following an October 27 call by the Rev. John Floberg, supervising priest of the Episcopal churches on the North Dakota side of Standing Rock, to join the vigil at the Oceti Sakowin Camp a half-mile north of Cannon Ball.

In his address to the crowd, Floberg said he was encouraged, and a little overwhelmed, by the outpouring of support, saying his initial hope was for 100 clergy to respond. The Episcopal Diocese of North Dakota is providing material support to the gathering, making sack lunches and breakfast for attendees, and opening the two Episcopal churches near here for overnight guests. 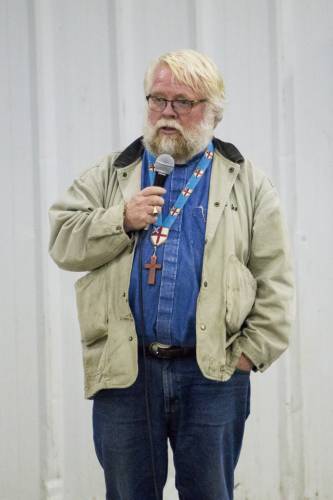 John Floberg, supervising priest of the Episcopal churches on the North Dakota side of Standing Rock, spoke to gathered clergy Wednesday. (Photo by Gregg Brekke)

“We are grateful to the Standing Rock Sioux Nation for their invitation for people to come to stand in solidarity with them,” said Floberg. “You are free during this time of gathering to express your faith.”

Floberg called attention to the details of the nonviolent action organized for Thursday, saying he’d already spoken with tribal leaders and the police monitoring the bridge over the Cannonball River, which has been blocked off by the state patrol.

Activists have gathered near Cannon Ball, North Dakota, since April, hoping to stop the construction of the 1,170-mile pipeline scheduled to move crude oil from the Bakken oil fields in western North Dakota to refinery facilities in Illinois. At dispute are environmental dangers associated with oil spills from the line that is scheduled to be placed under the Missouri River and the desecration of sacred sites. 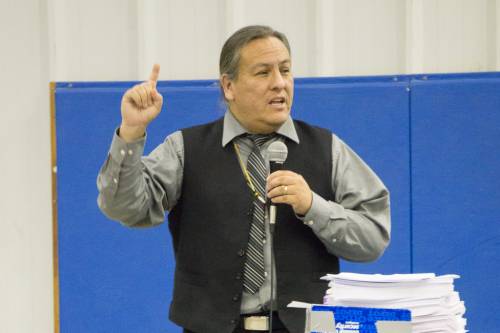 Standing Rock Sioux historian Dakota Goodhorse tells clergy about the sacred nature of the land through the story of Native groups along the Missouri River. (Photo by Gregg Brekke)

“When you hear people talking about ‘Where are the graves?’ ‘Where are the tepee rings?’ ‘Where are the prayer rings?’ so they can avoid them, you need to go back and ask the question ‘Is this the way we treat Gettysburg?’” Floberg said in response to official requests for documentation of sacred sites and recent misinformation about what state officials have known about archaeological discoveries in the pipeline’s path. “Do we go out and look for really individual little spots that maybe are three to six feet across and say you can’t touch this spot? . . . The area is known as sacred, and the sooner we quit talking about the spots, the graves, the individual things, the sooner people will understand what ‘sacred area’ means.”

Presenters from the Standing Rock Sioux included a presentation on how the site became sacred to Native groups by historian Dakota Goodhorse and the director of the visitor’s center at Sitting Bull College, Jennifer Martel.

“What has happened with this camp, with everything going on, I’ve had a flood of people coming in,” said Martel. “One of the things I’m so grateful for [is] when Father Floberg put this call out, I was like ‘Wow, you go get ‘em Father Floberg.’ This is so cool. If people can come comprehend what we are doing, it’s awesome.”

“One of the things about us as indigenous people is we are very welcoming,” she said. “This is what this whole camp is about.”