Church leaders say they were better prepared for this storm 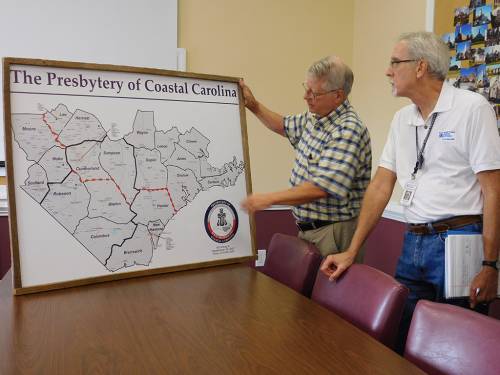 LOUISVILLE – If there is anything good that can come out of a hurricane, it is preparation for the next one. That appears to be the feeling of residents and volunteers working in New Hope and Coastal Carolina presbyteries in the aftermath of Hurricane Matthew. While the eastern parts of the state took the brunt of flooding from the storm, many feel the cooperation between agencies and communities has made the cleanup effort a bit easier.

“Three satellite long-term support groups are getting organized in Fayetteville, Lumberton and other communities” said Reinhold. “The focus for now is on FEMA and the Red Cross as they consolidate shelters and get schools re-opened.”

According to Reinhold most schools reopened on Halloween, but several bus routes that have been cancelled or re-routed due to washed out roads and bridges. Shelters are being consolidated and people are being placed in rental properties or hotels temporarily.

The next phase for the presbytery will be long-term emotional care and resources for the communities. Reinhold says he’s keeping close watch to see if fatigue is beginning to set in.

“Work teams are still eager to come in and I’m watching my colleagues as they gather in these groups. Their energy level is still pretty high, but I know that it can’t be sustained week in and week out with all of the other responsibilities that pastors carry,” he said. “Everyone want to help but we need to watch out for ourselves and each other.”

New Hope Presbytery fared better than expected. “Communities like Wilson, Kinston, parts of Tarboro and Goldsboro were hit hard, but the churches did not sustain any damage,” said Ted Churn, executive presbyter for New Hope. “The churches have been able to provide outreach and community service to those impacted by the storm and high water.”

Churn says they’ve worked with PDA to identify needs for surrounding communities. A warehouse has been set up in Greenville that is being managed by a number of churches in the area and volunteers are distributing goods where they are needed.

“Water in the homes has been the primary problem. People are trying to get back into their homes and do what they can before the mold starts to grow,” said Churn. “One family in Goldsboro saw their home flooded for the second time. The first time was when Hurricane Floyd came through and now they’ve been flooded again. They say they’re not going back because they can’t go through this again.”

Churn adds that one historic community suffered severe damage from the high water.

“Princeville was one of the first post-slavery African American settlements in the state and it was completely wiped out,” said Churn. “It took a couple of weeks before people could go back in to determine the extent of damage.”

“I’ve been involved in several disasters including Katrina when I was a mission associate in the Philadelphia Presbytery and I believe people have that experience to build on,” said Reinhold. “We’re not seeing an overwhelming glut of used and usable clothing. Some of the existing social service networks, food banks, church and community cooperation have simply geared up to a higher level than they were before. They used their knowledge of community to really respond well.”

Reinhold adds that the lessons they’ve learned in the last 10 years in connection to disaster response are paying off.

“We are seeing better federal, state and county coordination. One of the things that made the Lumberton situation so hard was the damage to the city water system,” he said. “In a matter of days, as soon as the water went down, the county was able to hook its water system into the city’s and provide clean water for the Lumberton city limits. That’s been a marvelous sign of cooperation and help. When people got their water back, cheers went up everywhere.”

Both Reinhold and Churn are asking Presbyterians to continue to pray and donate to the long-term recovery effort. They say there is still a lot of mucking out to do and enough volunteers to do the work. There will be a need for additional showers and hosting facilities for volunteer groups coming in.

“We are in conversation with both presbyteries concerning an additional deployment of National Response Team members for the purpose of identifying potential volunteer host sites,” said Kirk. “Through the funds raised as part of the Hurricane Matthew appeal, PDA will be able to offer financial support for the recovery efforts.”

Those interested in supporting relief efforts should designate gifts to “Hurricane Matthew” through https://pma.pcusa.org/donate/make-a-gift/gift-info/DR000193/.