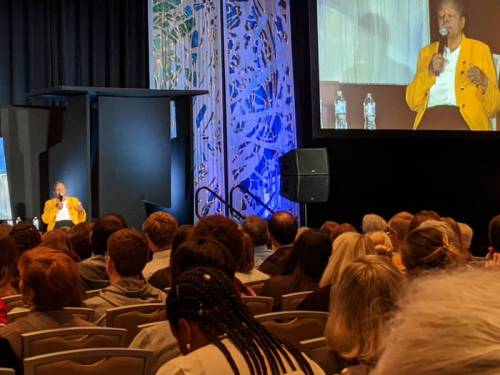 Elizabeth Ann Eckford, 78, a member of the Little Rock Nine, spoke to the Association of Presbyterian Church Educators Wednesday. (Photo by Jim Bonewald)

LITTLE ROCK, Ark. — With the authority of someone who’s been important to the civil rights movement since she was a 15-year-old high school junior, Elizabeth Ann Eckford offered the annual gathering of the Association of Presbyterian Church Educators Wednesday a firsthand account of her year as a member of the Little Rock Nine, the African American students chosen in 1957 to begin the desegregation of Central High School in Little Rock three years after the U.S. Supreme Court ruled that segregated schools are unconstitutional.

Eckford, 78, told the 650 or so people attending the four-day gathering — along with about 500 local residents who also heard the talk co-sponsored by the Clinton School of Public Service at the University of Arkansas — that although the events she described occurred more than six decades ago, “we have to acknowledge our painful and shared past.”

Here’s the account of that first day, Sept. 4, 1957, from the National Park Service, which now operates the historic high school as a National Historic Site:

“The Little Rock Nine were determined to attend the school and receive the same education offered to white students, no matter what. Things grew ugly and frightening right away. On the first day of school, the governor of Arkansas (Orval Faubus) ordered the state’s National Guard to block the black students from entering the school. Imagine what it must have been like to be a student confronted by armed soldiers! President Eisenhower had to send in federal troops to protect the students.

“But that was only the beginning of their ordeal. Every morning on their way to school angry crowds of whites taunted and insulted the Little Rock Nine — they even received death threats. One of the students, 15-year-old Elizabeth Eckford, said she ‘tried to see a friendly face somewhere in the mob. … I looked into the face of an old woman, and it seemed a kind face, but when I looked at her again, she spat at me.’ As scared as they were, the students wouldn’t give up, and several went on to graduate from Central High. Nine black teenagers challenged a racist system and defeated it.” 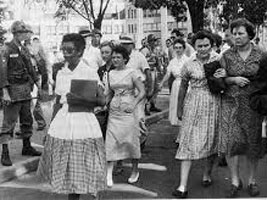 Elizabeth Eckford, at left, was one of the Little Rock Nine, the first black students to attend Central High School beginning in September 1957. (Photo courtesy of the National Park Service)

Her mother read her a psalm on that first day of school that speaks about God’s protection. Eckford recalled getting off the bus about two blocks from the high school that September morning. “I could hear the murmur of the crowd, but I felt reassured that the Arkansas National Guard was ringing the boundary of the school,” she said. But when she sought help from the soldiers, they “directed me across the street where there were angry demonstrators,” Eckford said. “They were there to keep me out of school, not protect me.”

“On that day we saw the military as it was — people of several ethnicities clearing people away” so that the Little Rock Nine could resume their classes, Eckford said.

On that scary initial day of school she found a bus bench to sit on, “which meant safety to me,” she said. A Guard officer sent a soldier “to make sure no harm came to me.” Four reporters stood behind the bench to keep demonstrators away. “One (reporter) was a staunch segregationist,” she said, “but he had a bit of a conscience.”

Education reporters from the Washington Post and The New York Times tried to reassure her. “One said, ‘Don’t let them see you cry,’ and I was glad I had dark glasses on,” she said. When the reporter put an arm across her shoulder, “the anger of the crowd turned toward him.” To add insult to injury, his editor wasn’t happy, either. “Reporters aren’t supposed to become part of the story,” she said.

Even the resumption of classes didn’t mean the students’ troubles were over.

“Body-slamming people into lockers occurred every day,” she said. Students threw garbage at the nine students. Most refused to interact with Eckford and her fellow students.

“When people are silent and turn their backs on a person being bullied, it made me feel like those people who turned their backs thought I was getting what I deserved,” she said. “But when you are silent, others are speaking for you.”

Her American history teacher that year “was so hateful that she would not let her hand touch mine when I was paying for the Weekly Reader,” Eckford said. “That was not surprising to my classmates. She taught history from the viewpoint of the United Daughters of the Confederacy.”

The shy student found herself looking forward to her final-period speech class, where two white students “talked to me every day. We were just people having ordinary conversations.” In the early 1990s, she was reunited with the two students, “and I got to tell them how much I appreciated that.”

“If you support a person, reach out and acknowledge their humanity,” she said. “Treat them the way you want to be treated. It can be very powerful. You are helping someone live for another day, and that’s not an exaggeration.”

Even though in 1999 President Bill Clinton and Members of Congress awarded Congressional Gold Medals to Eckford and the eight other students — Ernest Green, Jefferson Thomas, Dr. Terrence Roberts, Carlotta Walls Lanier, Minnijean Brown Trickey, Gloria Ray Karlmark, Thelma Mothershed-Wair and Melba Pattillo Beals — Eckford said she doesn’t participate in as many public events as her classmates do, including the 2009 inauguration of President Barack Obama, the nation’s first black president.

“I knew from having been to Washington for the gold medal ceremony that there is a lot of waiting around for stuff to happen,” she said with a grin. “There are tremendous crowds, and I don’t like crowds.”

In fact, she said, Wednesday’s talk might well be the last one she ever offers to such a large crowd.

“I am a very ordinary person,” she said. “But ordinary people in extraordinary circumstances can do extraordinary things. I was no different from other teens at the time. I am different now because I use my voice when I didn’t as a kid.”

“We went to Central High School for individual motives,” including getting the best education available, she said in response to a question.

“But after a short period we realized a lot of people were depending on us. There was a motive to stick and stay, but that didn’t make it any easier for us.”