Share God’s love with our neighbors-in-need around the world through One Great Hour of Sharing.
Make A Donation Click Here >
Home › Carrying the cross without fear

How the Coptic Church in Egypt deals with the constant threat 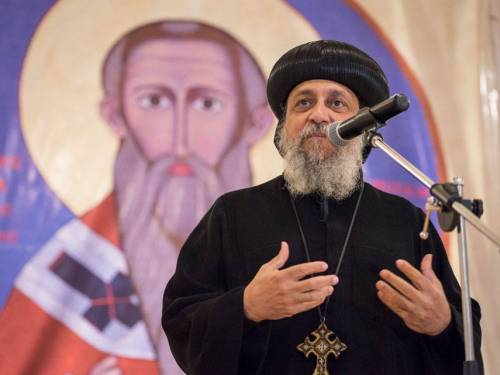 GENEVA – The brutal attacks on two churches in Alexandria and Tanta on Palm Sunday, with more than 40 victims, are not the first attacks on Christians in Egypt. In January, the so-called Islamic State declared threat on Coptic Christians and killed eight. In December 2016, a blast at the Cathedral in Cairo killed 30 people.

How to deal with this constant threat? And how to avoid the hatred that grows between Christians and Muslims? The Coptic Church has had an answer of sorts for 2,000 years: martyrdom—a forgotten idea in most parts of the world.

In the interview below, Coptic Bishop Thomas explains why the concept of martyrdom has a lot of answers for the life in the 21st century.

KB: The topic of martyrdom reoccurred in February 2015 when 21 young Copts were killed by the so-called Islamic State in Libya. People in the entire world were disgusted by the horror the terrorists provided through their professionally made video on the seacoast. The common reaction in the West was not to watch the video in order to keep the dignity of the victims.  Christians in Egypt did the opposite. They watched the video till the end. Why?

Bishop Thomas: They shared the suffering with those who were beheaded. And suddenly they observed, that, at that moment when the knives were going to cut their heads, the young men pronounced the name of Jesus. Some days later the Coptic church declared them officially as martyrs of the church.

KB: In social media at that time a lot of people in Egypt rejoiced. Icons on the tragedy at the seacoast were created. This is a behavior that Westerners can hardly understand. Aren’t Copts afraid? Don’t they feel angry or threatened?

Bishop Thomas: Don’t think that we don’t mourn! When something like this happens to innocent people there are a lot of tears. But in martyrdom there is both at the same time: the pain of the cross and the joy of salvation. Just take the example of Mary, the Mother of God. She had to give her child, but she rejoiced in God. This is what Christians in Egypt feel.

KB: Don’t they hate those who killed the 21 or who do other harm to Christians?

Bishop Thomas: When there is such a tragedy we always tell people not to be afraid of those who kill. Yes, they can take the body but what else can they do? They can’t take the eternal glory. When you are not afraid, you are able to love, to forgive and to show strength. Don’t forget that the story of the 21 young men in Libya started long before that day at the seacoast. They were kidnapped, they were tortured and threatened in an attempt to change their faith. But what these men did was pray and lift their eyes all the higher. When you turn your eyes higher, things on earth appear smaller.

KB: But isn’t this a psychological trick? You promise to a person something which is outside of this world. But this person is killed here in this world. It’s traumatizing for those who stay behind. Parents lose their kids, kids lose their parents and they must continue their lives without their beloved.

Bishop Thomas: Yes, it’s very traumatizing. And when you are with a person who has lost his or her beloved in an attack you don’t find any words to say. I once met a woman who had witnessed the murder of her sister years ago. For this she left Egypt and emigrated to New York. Her husband found a job and everything seemed to be fine. But the husband was working in the World Trade Center just the day of the 9/11 attacks. This woman lost twice a beloved person for the same hatred. In front of her, I didn’t know what to say. There are no words in such a situation. It’s traumatizing.

KB: But the mother of two of the 21 murdered was interviewed by the TV and said that she forgave, that she was praising God who gave strength to her sons to stay strong in faith – I can hardly understand how a mother can forgive those who killed her two sons.

Bishop Thomas: She knows that her sons are dignified. Of course, this doesn’t take away her pain. It’s a trauma despite everything. And therefore, a special trauma healing program is needed. But carrying the suffering doesn’t mean carrying hatred. And expressing pain and suffering doesn’t mean that I’m afraid. God doesn’t want us to throw us away. But when we are exposed to martyrdom we accept it. On the other side martyrdom is always linked to injustice. When there is martyrdom this means that there is injustice. And this calls us who stay alive to do everything to establish justice. We have the responsibility to work for justice. These brutal murders must be stopped.

KB: What does the church do for those who have lost their beloved in attacks against Christians?

Bishop Thomas: First, we take care of the families, spiritually and financially. The loss of a family member can mean a financial disaster for those who stay alive. If we don’t answer these needs we will extend the injustice. Second, we do trauma healing and pastoral care as much as we can to make the families feel that they are not alone in their grief. Then the church is working for human rights. This becomes a necessity and a need. And finally, we ensure that love must be ensured among people. Everyone is in the circle of love and forgiveness, even the murderers. Our fight is a spiritual fight. We are fighting with philosophy and principles.

KB: What does forgiveness mean?

Bishop Thomas: Forgiveness is an act between an individual and God, not between two individuals. The offender is not involved in this first step. Forgiveness means that I don’t allow hatred and fear in my heart. This is necessary for the second step: to create peace and reconciliation. We call for justice and we pray for the persecutors that they will understand and be enlightened by the truth of humanity.

KB: For two years the Western world is experiencing the rise of terrorism. In Paris, Berlin, Nice or London innocent people were killed for no reason. What could be the answer of the churches in the West? They don’t have the concept of martyrdom in their theology.

Bishop Thomas: The fear is invading the Western society. This is the purpose of terrorism. But the message of fear must be stopped. This could be a strong answer of the churches. If fear is ruling a society the idea of generalization can easily take over. When there are some Muslims who kill Christians it’s easy to feel that all Muslims are bad. But this is unjust. The answer on martyrdom can’t be injustice.

KB: The mentioned mother and the 21 who were killed by the so-called Islamic State haven’t had high education. They were ordinary people, not theologians, they didn’t go to university. How did they get to know how to integrate this philosophical concept of martyrdom in their lives?

Bishop Thomas: They were simple people and lived a simple life. But they were brought up in the spirit of martyrdom where the veneration of the saints plays a significant role. This gave them a profound spiritual base. A simple faith doesn’t need a lot of explanation. In our Sunday schools we don’t teach a written theology but a living theology. There are many examples in the history of the Coptic church where people were martyred but died in dignity. Perhaps the 21 were remembering Saint George who was tortured for seven years and who died as a hero. He was killed but kept his dignity. Or Saint Irenaeus whose father Polycarpus was martyred. The son wrote on the death of his father that he died with dignity. I’m sure that the 21 had in mind that dying in dignity matters. Or take the example of Dolagie in the third century. Her five sons were martyred while she was threatened to deny Christ. Imagine, their children were slaughtered on her lap! Everyone in the Coptic church knows a lot of images, stories and sayings on martyrs. Martyrdom is planted in the heart of the Christians in Egypt from day one. And we all know that it’s a history that is still alive.

KB: The concept of martyrdom seems to be logic in a context of persecution. What happens when there is no persecution anymore? Does this inevitably mean, that the idea of martyrdom loses its meaning and its function?

Interviewed by Katja Dorothea Buck, who is a German political and religious scientist working on the topic of Christians in the Middle East for more than 15 years. Bishop Thomas is the Bishop of the Coptic bishopric of Al-Quosia, Upper Egypt. He is also the founder of the Coptic retreat center Anafora, which is located between Alexandria and Cairo. The interview was done on March 26.