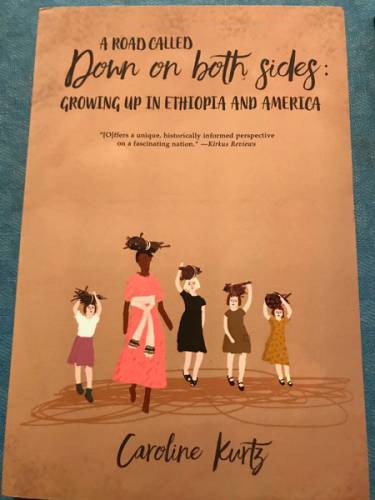 Ironically, Caroline Kurtz’s sister, Jane, is this year’s winner of the Presbyterian Writers Guild’s David Steele Distinguished Writer Award for her cumulative body of work — mostly children’s books about Ethiopian folklore and culture. Needless to say, this is the first time the Writers Guild’s two biennial awards have been given to siblings.

Kurtz’s book — “A Road Called Down on Both Sides: Growing Up in Ethiopia and America” — delightfully chronicles her upbringing in Ethiopia by her parents, Harold and Polly Kurtz, who served in that country from 1955-1977. The family returned to Portland, Oregon, where Harold Kurtz founded the Presbyterian Frontier Fellowship, now Frontier Fellowship. He died of brain cancer in 2009.

Caroline Kurtz, the oldest of four siblings, left Ethiopia to attend college in Illinois and says she “felt like I’d been exiled to a foreign country.” After finishing school, she immediately returned to Ethiopia, where she continues to live, spearheading development in that country’s Maji District.

“A Road Called Down on Both Sides” is described by Ethiopian official Dr. Woubeshet Ayenew as “introspective and light-hearted … I was elated to find that her colorful journey and deliberation afforded her the best possible conclusion — Ethiopia and America are indeed different, but they may be the yin and yang that we all seek.”

In an unusual move due to the closeness of the competition, the Presbyterian Writers Guild Board of Directors awarded an Honorable Mention to the Rev. Susan Baller-Shepard, an Illinois pastor, for her book of poetry entitled “Doe.” Best First Book Committee member the Rev. Skip Dunford of Elizabethtown, Kentucky, said, “We found Susan’s poems to be deeply moving.”

Caroline and Jane Kurtz’s awards will be presented at a luncheon in their honor during the 2022 General Assembly in Columbus, Ohio.