‘God can make a way out of no way’ 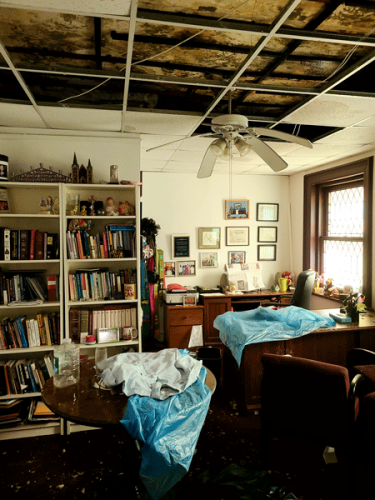 The pastor’s office is among the damaged areas of The Church of Gethsemane in Brooklyn, New York. (Photo courtesy of the Presbytery of New York City)

The Church of Gethsemane was devastated by the storm, which brought record-breaking rainfall during the weekend of Aug. 21 despite having been downgraded from a hurricane.

The storm, which preceded Hurricane Ida, broke through the roof and damaged three out of four church offices, including Lacey’s. Part of the sanctuary also was damaged along with the kitchen, boiler room and space shared with a progressive Jewish congregation and a childcare program.

“We don’t even know the total amount of what the cost of mitigating the damage as well as restoration is going to be,” Lacey said. “We believe it’ll probably be at least $100,000 or more.”

The church has insurance, but it’s unclear how much of the damage will be covered. Mediation and prayers are needed, Lacey said.

“We always ask for prayer because God can make a way out of no way,” she said.

Recent storms, such as Henri and Ida, also have placed a strain on other churches in New York, such as Mount Morris Ascension Presbyterian Church in Harlem.

“Budgets are already tight (due to the pandemic), so this kind of takes you out,” said the Rev. Althelia Pond, pastor of Mount Morris Ascension.

There’s also the increasing cost of materials and the difficulty finding available contractors. After being turned down by a company, Mount Morris Ascension was fortunate enough to get a church member with a background in contracting to begin repairing a rain-damaged stairwell that’s shared with a longstanding children’s program.

“The church itself is OK,” but repairing the stairwell area has been “a tedious task,” Pond said. 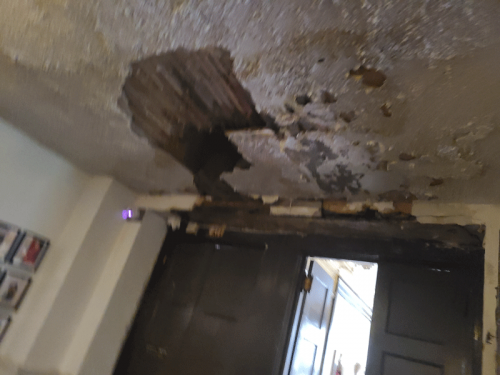 The damage to the Church of Gethsemane may cost $100,000 or more to repair, the Rev. Diane Lacey said. (Photo courtesy of the Presbytery of New York City)

The Church of Gethsemane, which is in the upscale Park Slope neighborhood of Brooklyn, has occupied its century-old building for more than three decades and received minimal impact from Ida. It prides itself on being welcoming, diverse and inclusive.

Established as a church in 1989, it has 40-50 members but also ministers to about 200 men and women in state prisons around the state who also are considered members.

“It was pioneered by a prison chaplain who was able to persuade the presbytery, over about a year or two, that this was a need, and there was a need for a real church, not a mission church, that would relate to people in prison and those coming out of prison,” Lacey said.

Due to the pandemic, the congregation has been meeting by phone since last April or May and that’s expected to continue until the end of November, Lacey said. However, a few people were at the church last week to ensure that Gethsemane’s monthly letter of encouragement would continue to be sent out to members in prison.

“I have volunteers and staff who are here braving the conditions to be able to not only get the letters out, but we also send a birthday card to the people whose birthdays are in this month,” Lacey said.

The Rev. Dr. Robert Foltz-Morrison, Executive Presbyter of the Presbytery of New York City, said the church has a unique and special ministry. “It means a lot to a lot of the members of the presbytery and to churches, which do support them financially with some gifts,” Foltz-Morrison said.

The Church of Gethsemane tries to be of assistance materially, financially and spiritually to those individuals trying to start their lives anew.

“When they come out of prison, if they are returned to New York City, they become part of our congregation,” Lacey said. “We give them what they need to get established … and then they move on, or else they stay.”

For more information about the Church of Gethsemane, go here.