Associate for Racial, Gender Justice talks about next steps 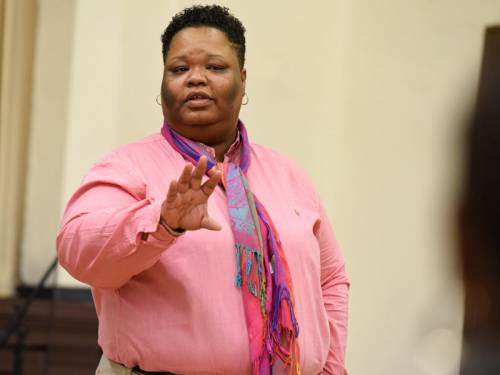 The Rev. Shanea D. Leonard spoke to the Presbyterian delegation to the United Nations Commission on the Status of Women in March. (Photo by Rich Copley)

LOUISVILLE — Recently I had the opportunity to sit down with a colleague to discuss the Black Lives Matter movement and how it connects to the church.

I am in no way an expert on the entirety of the Black Lives Matter movement. However, I have been a social justice faith abolitionist for many years and share a perspective that is grounded in my belief in Jesus and the practical side of the justice God calls forth.

My colleague’s questions are in bold. My answers follow each question.

So, tell me a little bit about how Black Lives Matter started. Where did it come from?

Black Lives Matter was started by three black women after the acquittal of George Zimmerman in the execution of Trayvon Martin in 2013. It was an act of resilience of life and a defiance of the status quo of black lives not mattering at all. This is the modern-day civil rights movement in that it is not centralized in a person or institution like the church. Rather it is predicated on the idea that intersectional justice in the effort to eradicate systemic oppression is our only means of forward movement if we are to be truly one nation.

Has the media been helpful (or not) in promoting it (or misrepresenting it)?

I am a proponent of exposure to further a cause. I think the media has not always been fair; however, if they had not lifted the work that Black Lives Matter has done across the country, at least for the sake of notoriety, then most would not know about it.

I think different news outlets can be biased in their agenda and approach. However, that is why it is key to mention that if I say Black Lives Matter, that does not mean that anyone else’s life ceases to be equally as important. It simply means that it is time for the lives of black and brown people to receive equal and fair treatment not just under the law but in the reality of the daily struggle in this country.

Far too often, what is portrayed in media is a negative stereotypical expression of blackness. So, to counter that, Black Lives Matter uplifts the vast majority of black folks who lack affirmation and dignity in various media outlets.

In a short answer, yes. The daily news makes it clear that it is imperative to remind humanity of the value of black lives. This is more than a hashtag that ebbs and flows in popularity in the media. It is about a core value and way of being in the world that affirms the humanity of black people and their inalienable right to receive fair and just treatment without fear of violence, harm or unjust murder.

Thus, Black Lives Matter has to still matter because black lives are often still the subject of unjust laws, the recipient of unequal treatment in the judicial system and the victims of state-sanctioned brutality. Some still see this movement as a nuisance or a politically divisive militia — both of which are untrue. It is, instead, the declaration of the promise of life, liberty and the pursuit of happiness that has yet to be fulfilled.

What words would you have for a person of color who is just tired of fighting?

I understand how difficult it is to wake every day and have to prepare yourself to navigate the microaggressions and blatant ignorance of perpetual racism and bigotry. Such effort can be taxing and tiring on one’s mind, spirit and body. It can even be triggering in some of the same ways PTSD is for those who have been in war.

What words would you have for a person of color who thinks this doesn’t pertain to them? What is the real role of an ally?

The role of an ally is key and crucial. Often people think in order to be an ally you have to announce that you are one and receive some type of public acknowledgement. However, true allyship is much different. To be a real ally means to center the stories, voices and issues of people of color. To be an ally means to champion justice and equity for black people even when they cannot see or hear you. Allyship requires that sacrifice of comfort and privilege is in effect to speak truth to power and silence the voice of hatred and bigotry. Allyship means that you believe and work toward fairness, equity, justice and just treatment of people who are systemically and perpetually disenfranchised because of racism or familial heritage.

What should we do if where we are, we don’t see anything Black Lives Matter-related in the area?

Just because there may not be a chapter of Black Lives Matter in your area does not mean the work of making black lives matter is not still needed. Showing up at school board meetings, city council meetings, voting booths, town halls, family reunions and even dinner tables in ways that promote discussions and actions that ensure that black people are given the respect and dignity that everyone else receives is how you can still promote the movement wherever you are.

Do you have any tips for how white people can engage Black Lives Matter?

Yes. Engage those committed to black lives mattering from a place of humility that leaves your privilege at the door. If white people are not first willing to acknowledge that there is clear dissonance in this country in how black lives are valued, then no progress or conversation can be had.

In order to work toward a more unified nation and church, white folks must do the work of realizing that there is a problem and then move toward educating one another on how it can systemically be eradicated from the fabric of our nation. Also, use your power and influence to lift the concerns of marginalized people. There may be some closed doors opened to those disenfranchised when privileged folks make room at the table. Lead Bible studies, book clubs and discussion groups around white supremacy and privilege. Teach the youth that racism is the real choice. And finally, do not appropriate the culture of black and brown people.

Tips for what allies can do: