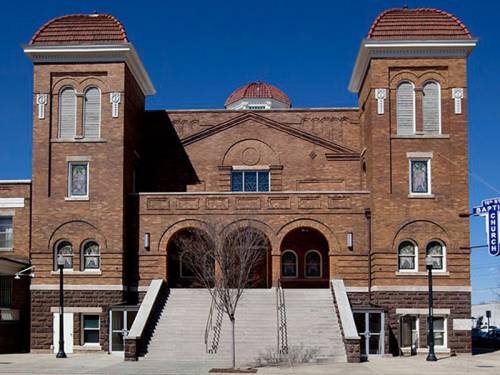 BIRMINGHAM, Alabama — Months before the annual observance of the bombing that rocked a congregation, a community and the nation, Sixteenth Street Baptist Church has been getting ready.

Renovations were taking place in June: fresh paint and new technology for the classroom spaces in the basement. Just as at worship services, Sunday school attendance ebbs and flows each week, depending on the number of longtime members and curious tourists. This Sunday (Sept. 15), which marks the 56th anniversary of the attack that killed four young girls, the church hopes to unveil the refurbished space where visitors can watch videos about kindness, caring for all humans no matter their race, and the civil rights history of the church and its community.

“After you leave this place, we don’t just want you to experience history,” the Rev. Arthur Price Jr. said in a June interview at his church. “We call the four girls ‘angels of change’ and our hope is that people will leave inspired, become agents of change as a result of what happened here.”

“We’re adding more content about not just what happened in 1963 but how the church was organized and the tension that was going on in the city during that time,” Price said in a subsequent interview about the church that was at the forefront of the civil rights movement before and after the bombing.

The pastor was busy this week preparing for his church’s “memorial observance” that is expected to feature special guests including a prominent U.S. chaplain, the pastor of another church that was attacked and a presidential candidate.

Lt. Col. Ruth Segres, an Air Force chaplain at Joint Base San Antonio-Randolph in Texas, will be leading the Sunday school lesson.

“That Sunday school lesson that was taught that Sunday (of the bombing) was ‘The love that forgives’ and she will teach a lesson surrounding that theme,” Price said of Segres, who is in charge of recruiting Air Force chaplains.

Just before the church bells are set to toll at 10:22 a.m. — the moment on Sept. 15, 1963, that the dynamite set by members of the Ku Klux Klan went off — former Vice President Joe Biden “will give a reflection about the day,” the pastor said.

After a wreath laying, the Sunday service will start, with the Rev. Eric S.C. Manning, pastor of Mother Emanuel African Methodist Episcopal Church of Charleston, South Carolina, serving as the guest preacher.

“I think we have a symbiotic relationship, considering the two churches experienced acts of violence within their place of worship,” said Price of the AME church where nine worshippers were killed by a white supremacist during a 2015 weekday Bible study.

“This is a way that we can come together in solidarity and preach the message of Jesus Christ and how he teaches us to stand tall and not to fear in the face of adversity.”

The observance recalls the deaths of Denise McNair, Addie Mae Collins, Carole Robertson and Cynthia Morris, who is also known as Cynthia Wesley. They were preparing for the church’s Youth Day when they died. As a poem by Camille T. Dungy in a recent special edition of The New York Times Magazine noted, had they lived, one of the girls would have been 67 and the other three 70 this year.

“We’ll toll the bells for the four girls and two more times for the two boys who lost their lives that day,” Price said, referring to two black male teenagers who were shot to death in Birmingham in the hours after the bombing.

The church, which dates to 1873, reopened in June 1964. Price said the basement was renovated the following year and has since featured fellowship gatherings, men’s breakfasts and Bible studies.

Convictions in the killings did not occur for decades.

A “Justice Delayed” exhibit at the Birmingham Civil Rights Institute across the street from the church noted that Robert Chambliss, Thomas “Tommy” Blanton Jr. and Bobby Frank Cherry were identified as potential suspects as the FBI initially investigated the blast. But it wasn’t until much later, after subsequent probes, that they were tried and received sentences of life imprisonment. Cherry was the last to be convicted, in 2002.

Beyond the annual Sept. 15 observance, at other times there are reminders of the tragedy, some marked with grief, others with hope.

In May, Price officiated at the funeral of Chris McNair, father of one of the four girls killed in 1963, and a former Alabama state legislator. And just last week, Price welcomed to the church a government delegation from Wales, including its minister for education, Kirsty Williams.

An adaptation of the window, which features the image of a black crucified Christ, is now part of the church’s logo.

Price said the visitors from Wales were heeding the message he hopes his church inspires even before the church launches the new videos about kindness across racial lines.

“That’s one of the things that the Welsh government did,” he said. “They presented us with a plate with a black hand and a white hand extended to each other, dealing with even though we’re different, we’re not deficient, and that we ought to be working together so that we make sure that what happened here 56 years ago never happens again.”