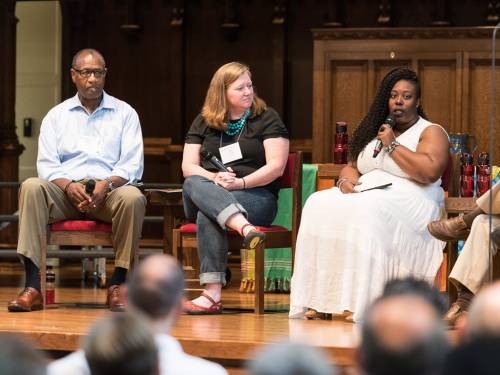 ST. LOUIS – The shooting death of teenager Michael Brown in Ferguson, Missouri, nearly three years ago continues to impact the communities of St. Louis and the nation. That’s the assessment of a panel discussion titled “Grounding Big Tent in the St. Louis Context” held at Big Tent on Thursday.

Attendees gathered in the chapel of Washington University to hear from local church pastors and community organizers about the aftermath of Brown’s death and what they are doing to keep momentum going to end suppression and racism.

“We are living in a time that is reminiscent to the old days where violence and hatred appears to be the expression of the day,” said the Rev. Alonzo Johnson, panel moderator. “Our schools are becoming more and more segregated. We are living in a world where violent actions are clear images on our TV screens and the cellphones of our children. We are not far from the place that held a mirror up to America to show us who we really are.”

Brown, an unarmed teenager, was shot to death on Aug. 9, 2014, by a white police officer in the St. Louis suburb of Ferguson. The shooting and a grand jury’s decision not to indict the officer set off a series of demonstrations in Ferguson and across the country.

Panelists described their efforts in the days and weeks after the shooting, to galvanize and organize efforts to change the culture of a community in trouble.

“We began to focus on impacted populations, those that are oppressed,” said Brittini Gray, an organizer with Metropolitan Congregations United. “We have expanded beyond our congregations and have begun working with groups committed to social justice issues.”

The Rev. Erin Counihan, pastor of Oak Hill Presbyterian Church and moderator of Giddings Lovejoy Presbytery, rejects the notion of chaos in the days and weeks that followed Brown’s death. She believes the community and nation’s reaction to the shooting was beautiful and carried a powerful message.

“My congregation saw what was happening and wanted to be a part of fixing this. People got that,” she said. “I watched people who would have been terrified of the neighborhoods come alive and take part in demonstrations and meetings. They started reading about the issues, educating themselves. They became activists and engaged in democracy. They took the call to justice seriously and made relationships with people they had never talked to before.”

The Rev. Clyde Crumpton, pastor of Cote Brillante Presbyterian Church, said Michael Brown’s death is a result of what is happening across America.

“He is a product of what America has created and what our community has allowed to take place,” said Crumpton. “Brown was a product of public education that has been deteriorating across America. It is not only systemic; we’ve allowed this to happen. We allowed public education to take over our children and it is doing our communities a disservice.”

Crumpton told the crowd of over 600 Presbyterians that the church was going to have to respond to what is happening in communities and “take ownership” in the education of children.

Gray challenged the narrative that Brown could have prevented his death if he’d listened to the police officer’s instructions not to walk on the road and said she felt the church hesitated before acting after Ferguson.

“The spirit was moving whether the church was there or not. As people of faith, we have to continually challenge ourselves on how God is showing up and how God is moving,” she said. “We are not doing the work we are called to do if we don’t act on what we see.”

Each of the panelists discussed what the communities surrounding St. Louis have been doing to address the larger issues of oppression.

“We are looking at the intersection of police, schools, courts and how they have disenfranchised people of color,” said Gray. “Five schools have signed on to eliminate suspensions pre-K to third grade. We have been working in collaboration with community groups around a civilian oversite board on juvenile justice issues to make sure that young people of color have appropriate representation in court.”

Gray added that until this year there was one public defender handling as many as 400 cases per year. She says their efforts have secured additional legal help.

The panel said the churches are working to raise minimum wage, connecting with the neighborhood associations and working to ensure the civilian oversight board for the police is held accountable.

“We are a small but mighty bunch. We work with Metropolitan Congregations United, offer our facilities for meeting space,” said Counihan. “There is no community center for kids, but there is an old gym and we want to invite neighborhood kids to come and play.”

“These protests are the voices of the unheard. Ferguson wasn’t just a protest or an eruption out of nowhere,” he said. “Michael Brown was the spark that lit this massive fire of frustration.”

The Rev. Phil Tom, with the Urban Ministry Network, concluded by saying the issue of racial injustice grew more than 50 years ago with the “white flight” out of the inner cities to the suburbs.

“It’s not a St. Louis, Detroit or Ferguson problem. It’s our problem,” he said. “Get involved. Reach out and build bridges in your communities. Don’t just put up a ‘Black Lives Matter’ photo on Facebook. You’ve got to do something more.”