ST. LOUIS – Nearly 300 Big Tent participants were treated to Friday evening visits at one of five area Presbyterian congregations to hear various St. Louis experiences of racism and to begin processing the “Holy Conversations around Race” that began during this week’s event.

Host congregations provided dinner and fellowship to their guests before setting the stage to speak about how racism has affected the city and the responses of the church. Summaries of these visits are below.

Due to limited space at host congregations other Friday evening opportunities including a Taizé service — with music by Paul Vasile and Paul Huh — and a UKirk Collegiate Ministries ice cream social were held on the campus of Washington University.

Organized in 1885 by the St. Louis Presbytery, Cote Brilliante was originally a predominantly white congregation. The congregational makeup shifted in the 1950s with the landmark Shelley vs. Kraemer Supreme Court decision allowing J.D. Shelly, an African-American man, the right to purchase a home in a formerly race-restricted area.

The “Holy Conversations” at Cote Brillante touched on this Supreme Court case and more. Led by a series of facilitators from the church, Big Tent participants heard firsthand about the history of and challenges in the Cote Brilliante community — all within the context of the topics of race, reconciliation and reformation.

Participants were asked a series of questions on each topic and encouraged to share experiences and thoughts from their own contexts. Chrisy Ennen of Greenville, Illinois, said her experience at Cote Brilliant was “amazing. It was wonderful to be sitting around tables and talking about hard subjects, but in a way that brought unity.” 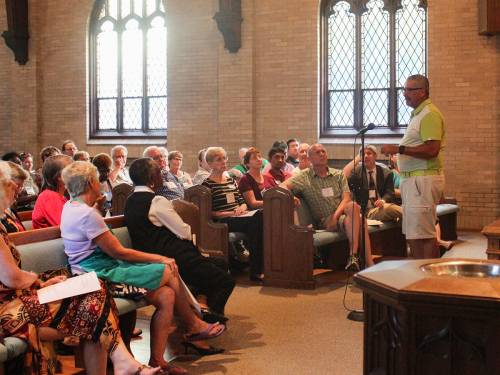 Nearly 100 people visited the First Presbyterian Church of Ferguson to learn how the church has moved forward following the shooting death of Michael Brown in their community nearly three years ago.

Pastor Mike Troutman shared how his congregation and the neighborhood have tried to heal and grow following the demonstrations and worldwide attention it received.

“Ferguson is in flux. On the outside, it looks good. Neighbors are talking and our city council is equally represented. So there’s progress,” he said. “But in many ways, the aftermath continues to haunt people as we look for ways to come back together again.”

“I thought it was beautiful to recognize that Ferguson mirrors the soul of this country. It is clear we all have a lot of work to do,” said Matilde Moros, of Richmond, Virginia. “I also heard a call for the PC(USA) to take urban ministry seriously. This was a wake-up call.”

First Presbyterian of Ferguson was organized in 1871 and is the oldest Protestant congregation in the St. Louis suburb. Church leaders say their approach is one of “always reforming,” with a focus on justice, service and growing youth into faithful adults. 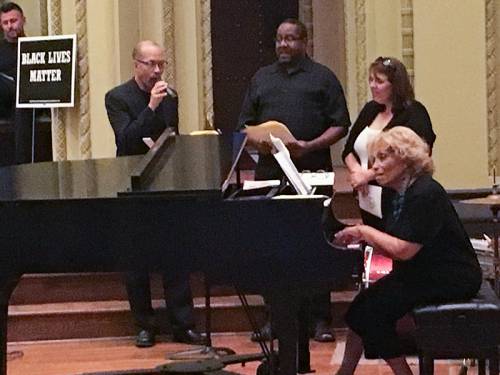 The presentation was created by Ruling Elder Helen Imes, chair of worship. Since 1838, Second Church has been part of the spiritual life of downtown St. Louis and committed to “a racially just and inclusive future.” Today the congregation is 20 percent people of color and the church session is even more diverse, with 50 percent people of color.

Second Church played a role in one of the most famous court cases in U.S. history. When the Dred Scott appeal came before the Supreme Court of Missouri, Second Presbyterian charter member and Ruling Elder Hamilton R. Gamble — a slave owner himself — was the lone dissenting opinion. Prior cases held that a slave who was taken to free territory was no longer a slave and Gamble was the only judge to say the court should follow prior cases and recognize Scott’s freedom. The case went on to the Supreme Court where it effectively reinforced the institution of slavery and moved the U.S. toward civil war.

Over many decades, Second Church has played a role in conversations about race and privilege, including May 25, 1969, when members of the Black Liberation Front marched into the church demanding to speak and urge reparations. They were welcomed to the pulpit.

Bob Becherer, one of the performers in the dramatic presentation read some of its final words. “We affirm by our deeds, love for all.” 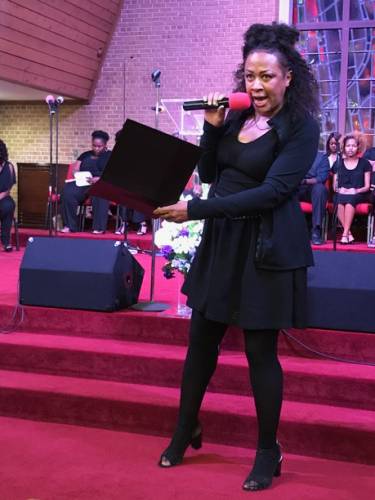 Glynis Brooks of Third Presbyterian Church presents a dramatic reading on the impact of racism on black and white Americans. (Photo by Jerry Van Marter)

At Third Presbyterian Church, a cadre of greeters in matching blue “usher” shirts met visitors. Cedric Portis, pastor of the predominantly African- American congregation for the past 14 years, said Third Presbyterian has grown in that time from less than 100 members to 500.

Portis, the choir, and various church members presented a two-hour program titled “Facing the Reality of Race,” which explored the painful legacy that slavery has inflicted on both black and white Americans. Participants used music, dramatic monologues, and a PowerPoint presentation to tell their stories.

Guests from majority-white Dardenne Presbyterian Church, a 45-minute interstate ride from Third Presbyterian, told about a partnership blossoming between the two congregations. Men from the two churches have laughed, cried and prayed together at retreats and collaborated in community service projects. Third Presbyterian’s choir attended Dardenne’s Advent service and showed the congregation “how to put a little soul into our celebration,” said elder Steve Collier.

The two congregations are planning a joint observance of the 500th anniversary of the Protestant Reformation in October.

“Our work together has resulted in our bonding as brothers and sisters in Christ,” Collier said.

“We don’t talk a lot about race relations,” said Dardenne’s pastor Larry Maley. “We simply work to heal them.”

Oak Hill Presbyterian Church is a mission-minded church actively involved in its community. Members of the congregation focus on engaging the community and strive to make everyone feel welcomed. The church hosts ongoing activities in efforts to dismantle racism.

While at Oak Hill, Big Tent participants engaged in conversations focused on geographical divides and the impact those divides have on neighborhoods and the people who live there. This geographical separation is not unique to the city of St. Louis. In fact, in the U.S. most urban cities are impacted by geographical segregation. In St. Louis that separation is called the “Delmar Divide.”

North of Delmar, where the population is 98 percent African-American, there are numerous boarded and abandon houses, a tremendous number of liquor stores, very little green space and a median income of $18,000 per year, with only 10 percent of the population having a college degree.

In comparison, south of Delmar where the population is 73 percent white, there is a vast amount of green space, 70 percent of the residents have college degrees, the median income is $50,000 per year and the streets are lined with stately homes behind gated communities. Oak Hill members said the divide was by design. Individuals who owned homes south of Delmar and other parts of the city had deeds that stated, “You will not sell to a person of the Negro race.” This was done to keep the neighborhoods “white.”

One Big Tent attendee previously lived in such a neighborhood. However, he chose to ignore the language in the deed and sold his home to an African-American family.

The site visits by Big Tent attendees were part of the Hands and Feet initiative that will carry over to next year when St. Louis hosts the 223rd General Assembly of the PC(USA).