Make A Donation Click Here >
Home › Beyond protests, how can you and your church bring change?

Director of PC(USA) Washington Office has ideas, including act local, get to know police and run for office 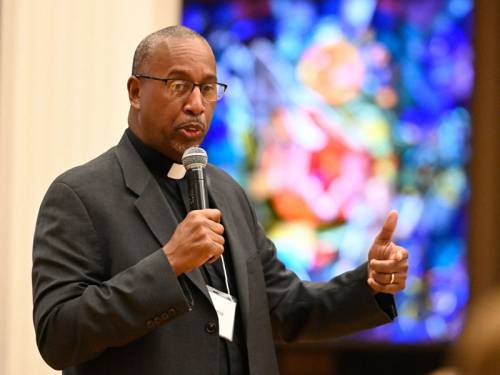 The Rev. Jimmie Hawkins, coordinator of the Office of Public Witness, says Presbyterians can have impact on all levels of government. Many, he said, should consider a run for office. (Photo by Rich Copley)

LEXINGTON, Kentucky — The Rev. Jimmie Hawkins was talking with a former educator who was concerned about what was happening on her local school board.

“I said, ‘What do you do?’ and she said, ‘I’m retired,’ and I said, ‘Why don’t you run for school board?’” Hawkins recalled. “That was not the response she was expecting, because she just burst out laughing. I don’t think she had thought about it.

“We’ve got to push people, because there are some good people out here who need to be in positions of government authority.”

Hawkins was speaking at the end of a week filled with nationwide protests against police violence that were seeking justice for recent victims George Floyd of Minneapolis and Breonna Taylor of Louisville, Kentucky, and grappling with the enduring impact of structural racism.

While protests show solidarity and help shape public opinion, the goal is ultimately to bring about structural change. Hawkins is the director of the Presbyterian Church (U.S.A.)’s Office of Public Witness in Washington D.C., and he has a number of ideas of how people and churches can help make that change, including run for office yourself — yes, you.

WATCH: The Rev. Jimmie Hawkins talks about participating in protests

“Presbyterians are at a new stage,” Hawkins said. “The level of engagement in full activism is at an all-time high. People are starting to say, ‘This is something where I think I can make a difference, and I want my church to be engaged.’ That’s something I hear a lot. They want their church to be more engaged. The church is filled with human resources, and they’re probably the most under-utilized resource in our denomination.”

Hawkins highlighted a few areas where individuals and churches can begin engagement.

Act local: National politics are of course where the headlines are made. But Hawkins encourages people to engage at the local level, where change often starts.

“Get down to the city council meetings,” Hawkins said. “Run for city council. Talk to them and get to know them, because it’s all about relationships. If they know who you are, and they see that you’re an advocate, willing to have a conversation — to listen, to share — that’s a level of engagement that you can’t get in D.C.”

Some of the efforts Hawkins encourages include:

“You see people who want to turn their lives around,” Hawkins said, “and it is extremely difficult in this country, to overcome the curse of poverty and incarceration.”

Get to know the police: A lot of the current advocacy stems from an adversarial relationship between police and the communities they are supposed to serve. Churches can play a role in bringing those parties together, Hawkins said. He recalls a summer camp his former church in Durham, North Carolina had, where officers would come and talk to the children. That is one of several ways a church can help engage police with communities.

“There’s an attitude on the part of the police that every person they encounter is a criminal,” Hawkins said. “They’re very heavy handed. … That needs to be countered. They need more training. They need to understand that most of the people they encounter are not a threat.

He says churches and individuals can also advocate for reforms such as community policing and different forms of response that bring, say, mental health professionals and social workers into situations where the use of force is not necessary.

Maybe the biggest reform needed right now, Hawkins said, is more community oversight of policing, with actual enforcement power. He notes that in Durham, there was a community oversight board, but it had no authority beyond reviewing cases where police are charged.

Get to know the people you want to advocate for: This is a particularly important point for churches that are not based in low-income communities or don’t have a substantial number of members who have low incomes.

“We engage in this work, and we never talk to the people on whose behalf we’re engaging,” Hawkins said. “We’ll sit around a table, and we live in our nice home, we have the same conversation, the same people, each and every time, coming up with the same solutions. Rarely do we engage with people who are on the front line, people who are in impoverished communities, people whose children are having a difficult time in school and asking people, ‘How can I help you?’ and not, ‘What can I do for you?’ but ‘What can we do together?’”

“One of the mistakes we make in the activist community is that element of society is pretty much left out,” Hawkins said. “We talk about white people always being on top — which they are, white privilege is real — but there’s a different conversation we need to have, building a coalition of individuals across racial lines with commonality.”

People who are white and living with low incomes may not feel privileged, he says, but churches can play a role in getting them to see how advocacy can benefit all people living in poverty.

Don’t forget federal and state leaders: While people can make the most impact at the local level, federal officials need to hear from their constituents, Hawkins said. The Office of Public Witness regularly issues Action Alerts that help people contact their representatives when legislation and issues of concern to the church are on the table.

Currently, he says, a lot of states are considering important voting rights legislation.

Yes, run for something: “We have people in public office who have no business being in public office,” Hawkins said. They are “people who are making decisions who are more concerned with how it benefits them, how it benefits their reelection, how it benefits their political party, who have no idea what it means to work collaboratively, no idea how to help people who are struggling financially, people who are in the worst shape they have ever been in, especially with the unemployment numbers being so high, people who don’t see needing help as a sign of weakness and are there to be public servants. We need to resurrect those words: public service. They need to serve the public, and I think they’ve forgotten what their call is.

“I really think people of good intent, people who are progressive, individuals of faith who are not limited to two issues — abortion and sexuality — who see that hunger is a justice issue, LGBTQ rights are important, should run for office. Get engaged, get in the game.”

Ultimately, at a time when the country is hurting, Hawkins said the church can be part of the solution.

“That’s what we’re here to do,” Hawkins said. “There’s no other organization, institution, body which deals more with healing.

“We are people of hope.”