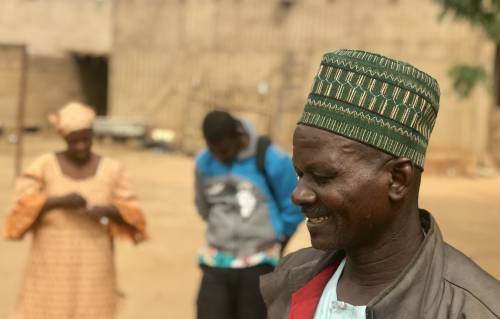 The former treasurer of the Evangelical Church in the Republic of Niger told Niger Mission Network participants that God prospered an effort to generate income for Christian families through goats shared with Christian families and their Muslim neighbors. (Photo by Matthew Schramm)

LOUISVILLE — A delegation representing the Niger Mission Network (NMN) saw beautiful feet in Niger — many of them — during a recent 13-day partnership trip hosted by the Evangelical Church in the Republic of Niger (EERN). Participants learned some of the ways the good news of Jesus is proclaimed by Christian brothers and sisters in a country where the vast majority of its citizens are Muslim.

A pastor, who is a member of the EERN Board and makes his living as a teacher of English teachers, humbly serves his family, congregation and village. Like many of the leaders, he converted from Islam and is the only Christian among his siblings. He has paid, and even borrowed money to pay, for the education of many of the children of his Muslim siblings. Some of these nieces and nephews who lived with his family while going to school have become Christians. One is a pastor.

The mission network group learned this leader also has given land and contributed to build a church, a pastor’s home and a student hosting center in his village, because as he said, “There are only three Christians from my village, and we must share the good news.”

The analogy of beautiful feet was first used to describe those who carried the good news from Babylon to Jerusalem, proclaiming the end of captivity and the return of the Jewish people from exile. The apostle Paul revived this image of beautiful feet, as he described how the Gospel must go forward so that all may hear it and believe. There must be messengers, those with beautiful feet; for the ultimate good news of Jesus to go to all people.

Niger is among the world’s poorest countries, has a literacy rate of 29 percent and experiences frequent famines. Yet this land where Christians are less than one percent of the population does not appear to be overwhelmed. Like the ancient Israelites in exile, who recognized that a return to their homeland was not impossible for their God, and the apostles, who were filled with the Holy Spirit, Christians in Niger have placed their trust in God. Their faith propels them forward with confidence in their role as messengers of the Gospel, offering hope to a people who are hungry for it.

In one small village, the EERN drilled a well and gave it to the Muslim community. Even those in the group who walked into the village and saw the crowd gather around the well cannot fully imagine how life-giving that clean water is. No longer do Muslim neighbors in that community have to walk far and carry water from a contaminated source. Imagine how this compassionate act may have changed the way these followers of Islam perceive followers of Jesus.

New wells and sources of clean water are half of the WaSH program (Water, Sanitation and Health) facilitated by mission co-worker Jim McGill. The other half of the program focuses on latrines and sanitation practices. Menstrual health maintenance (MHM) latrines, constructed at the EERN middle schools, help keep girls, who often drop out at puberty, in school.

Jim’s wife, Jodi, works with EERN’s nursing school, which has a new building and received its first students in February. Along with preparations for the nursing school, Jodi teaches in other public health contexts and builds long-term relationships. When the government certified the nursing school, it included approval as a university, which allows for developing new schools in the future.

EERN schools intentionally give favor to girls. They admit more girls than boys because girls have always been underserved and undereducated. The nationwide literacy rate of women (20 percent) is only half that of men. The church is seen as standing up for the least of these (Matthew 25) and valuing women in a culture that pushes them into stereotypical roles of serving. A large number of students are Muslim, and the government wants the church to build more schools.

Often Nigerien children stop their education after primary school, because the middle and high schools are located in larger towns that may be 6–8 miles away from their villages, which is too far to walk each day. This situation has created a need to find homes in the towns where students can stay during the week while they are in school. Numerous leaders of the EERN have shared with the NMN that they came to faith through the positive witness of Christians they stayed with during this period in their lives. 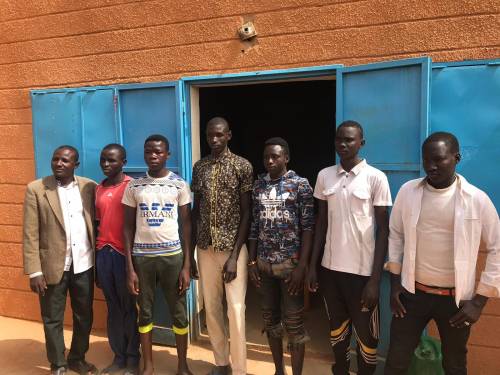 The Niger Mission Network has worked in partnership with the Evangelical Church in the Republic of Niger (EERN) to build hosting centers where students can stay while they complete their secondary education. (Photo by Matthew Schramm)

In response to this student housing need, the EERN has launched an effort to build student hosting centers at evangelists’ homes in the larger towns, which can provide housing for 20–30 students. NMN members toured three recently constructed centers and two others being renovated. Usually half of the students staying in these hosting centers are Muslim. They leave with very positive views of Christians and some with new-found faith.

A 13-year-old girl, the brightest in her class, could not find a home where she could live while attending middle school — so her parents decided to arrange a marriage for her. The village mayor recognized the travesty and intervened. He secured a place for her in one of the recently completed student hosting centers.

The former treasurer of the EERN showed the NMN group his goats. He told them about a project to provide goats to Christian families in his village. He explained that the goats would help them generate income and break some of the bonds of poverty. The expectation was that each family would give the first offspring to another Christian family. God prospered this effort and inspired the church families to also give goats to their Muslim neighbors, bringing the light of Jesus into the darkness of subsistence living.

A Muslim elder spoke highly of mission co-workers Michael and Rachel Ludwig. He said the Ludwigs were the only ones in his neighborhood who were willing to help him when he was in need. Rachel often provides medicine and bandages. Through these practical helps, their neighbors know about Jesus’ presence and love.

Michael helped initiate Community Health Evangelism (CHE), a holistic approach to ministry for EERN evangelists. He co-leads CHE training with the EERN national trainer, and together they work toward long-term sustainability. CHE addresses the physical needs of families and the community while sharing the good news of Jesus. CHE is a model that helps communities identify and respond to their greatest needs with their own resources.

In a country where 20 percent of children die by age five, CHE evangelists demonstrate simple and efficient ways to wash hands and use other healthy practices, which produce better health almost immediately. Neighbors observe the improvement and ask to be taught how to apply these practices in their own families. These healthy initiatives are passed along with stories in the oral tradition of villagers, which can often include biblical stories that convey spiritual well-being as a part of healthy living.

In order to have a Christian witness in every significant town in the country, the NMN team was inspired by the vision of the EERN to start 52 new churches by 2022. When they established the goal three years ago, there were only 22 towns with churches. As of today, evangelists have been sent to 19 new places. They are building homes and being given oxen and carts or grain grinders to establish evangelists as tentmakers. 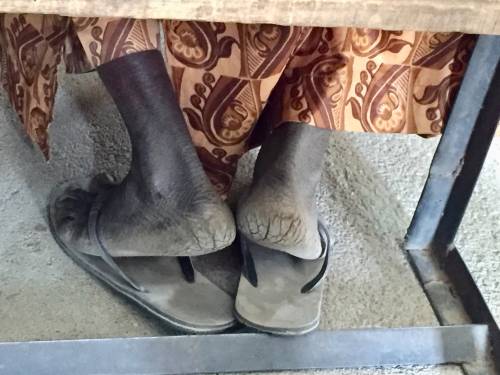 The feet of a worshiper in Niger. (Photo by Cheong-Hee Chang)

NMN members learned that evangelism is far more than sending evangelists. It is everything the EERN leaders and members do. They live a missionary lifestyle in which bringing the good news of Jesus permeates every project, program and personal interaction with their Muslim neighbors. How beautiful are their feet!

The Evangelical Church in the Republic of Niger is the largest Protestant denomination in Niger with about 12,000 members. World Mission has partnered with the EERN in a ministry of mutual learning and holistic witness for nearly two decades. Because the EERN has worked diligently to develop and maintain good Christian-Muslim relations, the opportunities for mission and ministry in Niger are very high at this time. Learn more about God’s mission in Niger.

The Rev. Dr. Donald J. Dawson is co-convener for the Niger Mission Network and retired director of the World Mission Initiative at Pittsburgh Theological Seminary and the New Wilmington Mission Conference, regarded as the oldest mission conference in the U.S.