A group tours the downtown facility, which will house the General Assembly June 20-27 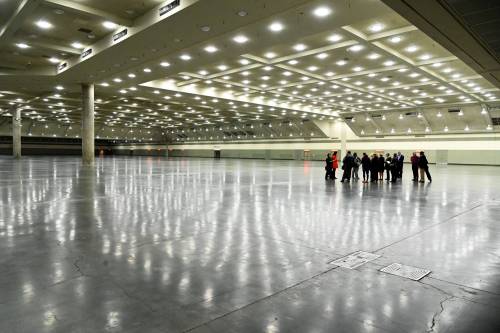 Swing Hall, a mammoth portion of the Baltimore Convention Center, will be home to plenary and worship during the 224th General Assembly June 20-27. A group of Presbyterians toured facilities for the upcoming Assembly on Wednesday. (Photo by Rich Copley)

BALTIMORE — For the time being, the Baltimore Convention Center — nearly 422,000 square feet of space and 50 meeting rooms in the heart of a thriving downtown — is mostly vacant. But beginning 128 days from Wednesday, thousands of Presbyterians will do their best to fill up the mammoth meeting facility.

The last time Baltimore hosted the General Assembly was 1991. Commissioners to the 203rd Assembly elected the Rev. Dr. Herbert D. Valentine as moderator. 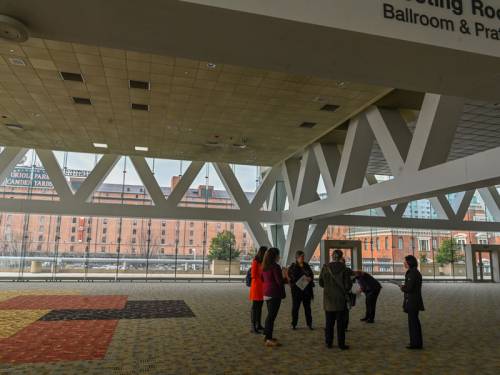 For the most part, commissioners to the 224th Assembly will meet in the newer portion of the convention center, which was added in 1996 to a facility that opened in 1979. Plenaries and worship will be held in cavernous Swing Hall with two adjoining exhibit halls, a total of more than 90,000 square feet that can be divided. 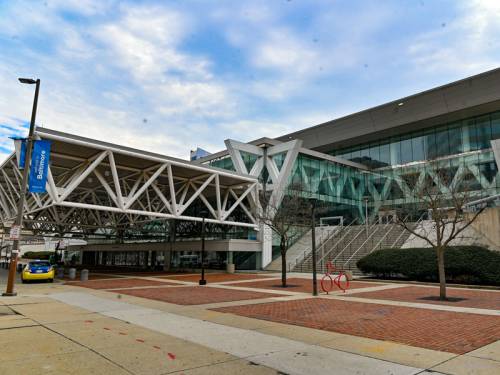 Since opening its doors in August 1979, the Baltimore Convention Center has been the catalyst for economic growth and tourism in the region. Construction of the facility preceded Harborplace, a festival marketplace, and the National Aquarium.

The Baltimore Convention Center hosts more than 140 events per year and annually welcomes more than 500,000 attendees.