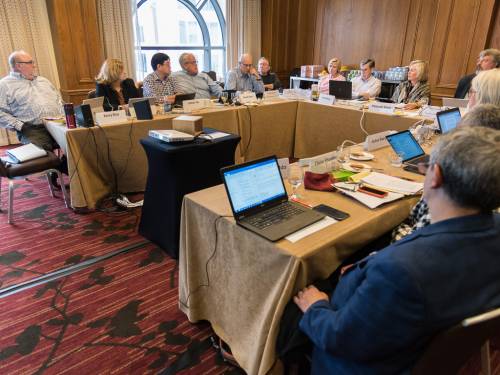 Members of the All Agency Review Committee, staff and agency representatives attend the group’s Oct. 9 meeting in St. Louis. (Photo by Gregg Brekke)

ST. LOUIS — The All Agency Review Committee heard reports at its meeting today that began to give the group a vision of “the church as a whole” as it was asked to do by the General Assembly 222 (2016) of the Presbyterian Church (U.S.A.). Responding to the same set of questions, each of the six denominational agencies presented a status update on their mission, work and collaboration across the church.

Before delving into the reports, the committee heard an update from 2020 Vision Team co-moderators Bernadette Coffee and Lisa Juica Perkins, including results of surveys conducted by team members with PC(USA) constituents, ecumenical partners and quasi-related agencies such as community service organizations, Black Lives Matter groups and human trafficking agencies.

Noting the outreach to those beyond the walls of the Presbyterian Church, Coffee said the group was “being open to whatever it is God is calling us to do and be.”

Coffee and Juica Perkins also relayed a deep sense of lament expressed by those interviewed.

“People are lamenting across the church and they’re focusing on what’s breaking their hearts, because their hearts are broken,” said Juica Perkins. “It’s not that they aren’t concerned with joy, it’s that people are focused on what is breaking God’s heart.”

“They lament we’re not the church we used to be and don’t know the church we are to be. That we don’t witness enough to who we are.”

Juica Perkins said many of the conversations with PC(USA) members and ecumenical groups were “difficult and uncomfortable,” leading some on the team to ask, “What if we do all this [work] and the PC(USA) still dies?”

Conversations with organizations outside the church, she said, were less fruitful in forming a vision, unless that vision is to be recognized at all. “We found they don’t have a clue who we are,” she said, “and we could possibly be irrelevant to them.”

Although the 2020 Vision Team was slated to continue its work through General Assembly 224 in 2020, Juica Perkins said GA 223 in 2018 “has the ability to say our work has ended.” She also suggested the vision may not be communicated in “word only — it may be in art or song.”

Committee member Dave Davis suggested a framework for the scope of each of the three groups evaluating the PC(USA), saying, “We [All Agency Review] are assessing the current work in the agencies. … Way Forward folks will suggest changes for the agencies for the 3-5 year span to correct some immediate things. … 2020 Vision folks are taking a 10-, 20-, 30-year view of it.”

Representatives from the six agencies of the PC(USA) were on hand to speak about their answers to the All Agency Review Committee questionnaire and respond to questions.

Office of the General Assembly

Committee member Chris Mason began by talking about the Presbyterian Historical Society as a ministry area of OGA, noting that he’s encountered very few people who know of this relationship. “They make up 40 percent of all OGA employees,” he said. “They touch all the part of the church in ways no one else does. They do things directly with all the agencies and act as a repository for the history of the church.”

The group then turned its attention to the recent discussion by the Committee on the Office of the General Assembly (COGA) on recommending per capita member contributions be adjusted from its current $7.73 in 2018 to $10.11 in 2019 and $10.82 in 2020. The increase was suggested as part of a preliminary balanced budget proposal, said Kerry Rice, deputy stated clerk and staff liaison to the All Agency Review Committee.

“We did that in part to let the church know what it will take to do the job you’ve given us to do,” he said. “We do have reserves, and we can look at how to draw on those reserves. We need to tell the story effectively so the church can support the work we have in front of us. And we need to be prepared, if the church says ‘no,’ then we need to have a plan B in place.”

Calling the Rev. Dr. J. Herbert Nelson, II, Stated Clerk of the General Assembly, “very programmatic,” committee member Eric Been said, “It feels like we have a local church pastor as a stated clerk. That’s not necessarily a bad thing, but it does feel programmatic.”

Angela Duffy, senior vice president and general counsel for the foundation, reported that it is continually asking the question, “What can we do to build vibrant sustainable congregations?”

Saying the Foundation had recently engaged an outside firm to survey staff about the Foundation’s work environment and ethos, committee member Debra Avery asked, “Could this review be a model for all agencies?”

Noting changes in how the Foundation has worked to build a donor base — moving from working almost exclusively with individuals, to now offering electronic giving services to churches and mid councils through ministry partnerships — she noted the change has also resulted in learning about more individual donors and receiving more individual gifts.

“Some donors of international gifts have found the PMA’s fee structure too high and expressed concerns over how their funds were being routed and allocated, and how overhead was being accounted” she said. “So they expressed an interest in the Foundation transferring the money into useful areas.”

Another shift was the exit of the Presbyterian Mission Agency from certain ministries and fundraising efforts, most notably Ghost Ranch and the Theological Education Fund.

Avery noted she thought it made more sense for the PMA to administer the work of the Theological Education Fund, but not the fundraising. “Ministry connections aren’t always the same as fiduciary connections,” she said.

The Foundation’s response also leveled a critique of how the passage of General Assembly Commissioner Resolutions and overtures can alter the priorities of agency work with little or no input from the agency in question.

“Some of the ways that General Assemblies function in recent years present potential perils to the Foundation’s (and other agencies’) faithful obedience to God,” the response read. “Overtures are developed and promoted which may directly impact our work, perhaps without sufficient consultation with us.”

Block wondered if the All Agency Review Committee could make a recommendation on how these resolutions are introduced and enacted, saying, “Can we change the standing rules so that mission priorities for the agencies can’t be completely upended by Commissioner Resolutions?”

Clare Lewis, vice president of sales and marketing for PILP, said the agency was continually looking for ways it could partner across the denomination, including “possible intersections between OGA (with emphasis on mid councils) and providing education about property as investment, and general management.”

Given the nature of the financial products PILP offers, Lewis noted the agency’s attempts to maintain a “balance between being missional and being profitable enough to continue to do grow the mission,” and that “maximizing profit should not be [the] main priority.”

Barry Creech, director of policy, administration and board support for the PMA, said he and senior leadership at the agency “struggled to answer these questions” posed by the All Agency Review Committee while the PMA was in the midst of its transition to a new acting executive director and a scheduled board meeting.

He said other staff of the PMA struggled to answer these questions because their nature was “at a different elevation than they were flying.”

Creech requested more time to better prepare a response to the questionnaire, which was granted by the committee.

Marc Lewis, president and publisher of PPC, said the agency was working toward the anticipated merger of Congregational Ministries Publishing into PPC by Jan. 1, 2018.

“We need to be self-sustaining,” Lewis said of PPC. “We need to create a bit of a profit so we can produce more titles. Any profit we do make goes back into publishing more resources.”

Some of that profit, he said, subsidizes resources that do not generate profit and pays for additional services such as translators who “are interested in the translation of books, not just curriculum resources.”

Speaking of the increased options for enrollment, Frank Spencer, BoP president, said, “For the first time, there were more people in the plan than there were the previous December.” He also speculated, “There will be significantly more in the next January.”

The Board of Pensions was commended for “the emphatic way in which [it] says yes” to challenges facing the church, including the turbulent world of health care and plan changes.

Spencer said the BoP is “exploring ways to create reduced dues for small churches and young ministers. … We’re trying to figure out if there are ways the menu system may help get benefits to people on the assumption that some is better than none.”

“We’re putting a lot of energy of getting more people more benefits in different contexts,” he said, possibly expanding into high-deductible plans and specialized long-term solutions for older plan members.

The All Agency Review Committee continues its meeting tomorrow, Oct. 10, with a closed executive session to open the day and concludes its work for this meeting by discussing the role and function of the General Assembly; its work during the upcoming mid council executives, moderators and stated clerks gathering; and considering ideas for the format and presentation of its final report.