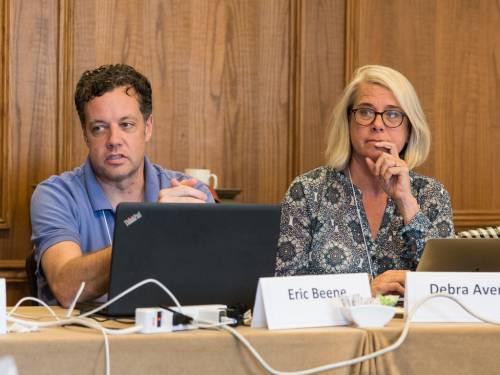 Committee members Eric Beene and Debra Avery at the October 10, 2017 meeting of the All Agency Review Committee of the PC(USA). (Photo by Gregg Brekke)

ST. LOUIS — On its second day of meeting the All Agency Review Committee of the Presbyterian Church (U.S.A.) took up the issue of how certain topics are introduced at the denomination’s General Assembly and the ramifications of decisions made on the work of the agencies, often without input from the agency staff.

Following a two-and-a-half hour closed executive session at the beginning of the day to discuss property and personnel matters, the group gathered to consider the work of the General Assembly. At issue was how Commissioner Resolutions are introduced and debated at the bi-annual gathering of the PC(USA) for consideration by committees and the Assembly.

Committee member James Wilson said the current model “doesn’t take advantage of the deliberative process,” asking how the Assembly maintains Robert’s Rules of Order allowances to bring new business, yet in a manner that makes it most effective?

She suggested setting a deadline of one month after completion of commissioners’ training for the submission of Commissioner Resolutions, meaning these resolutions would be available for study and debate well before the Assembly begins.

Committee member Marco Grimaldo countered that germination of Commissioner Resolutions often occurs after Assembly committee assignments have been made and commissioners have met face-to-face at the assembly.

“I know in the past we’ve encouraged commissioners, even in my own case, to bring a resolution forward,” he said of the opportunity to speak with commissioners at the Assembly on topics of importance that were not presented in formal resolutions prior to the Assembly.

Wilson also suggested that an attempt by the All Agency Review Committee to modify the rules of the Assembly would be seen as a throttling of commissioner power and discretion. “What you’ll hear is that this is more of an attempt to manage the assembly by the agency, and we’ll be seen as proxies of the agencies in shutting down the process,” he said.

He suggested adding requirements to the process that addresses Commissioner Resolutions including a recognition that, because of the late nature of their introduction to the committees for debate, they be considered late in the committee’s business and an opportunity given for the agencies to speak to the resolution. 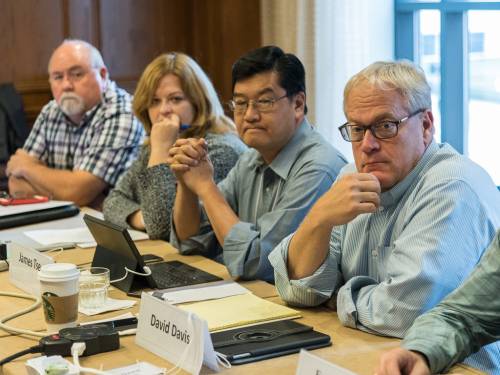 Kerry Rice, Angela Duffy, James Tse and David Davis at the October 10, 2017 meeting of the All Agency Review Committee of the PC(USA). (Photo by Gregg Brekke)

Wilson also proposed overture advocates, agency staff and other experts formally be given the opportunity to comment on Commissioner Resolutions as they move through the process, rather than limiting such comments to the discretion of committee moderators.

“Once the business [of a Commissioner Resolution] is before the committee, it has an opportunity to be shaped by the discussion – and a very different overture may result from that conversation,” he said.

Agency staff present for agreed with Wilson’s assessment and recommendations, noting their input may inform staffing and budget implications of Commissioner Resolutions.

“Overture advocate gets to speak, but experts on the topic don’t get to respond,” said Barry Creech, director of policy, administration and board support for the Presbyterian Mission Agency. “You can’t jump up every time [to make a point], but you should be able to give information to the body.”

Kerry Rice, deputy stated clerk and staff liaison to the All Agency Review Committee, commented — with the agreement of those who have been Assembly Commissioners or resource staff to Assembly committees — that the latter process, committee work, produced the greatest change to the work of the agencies.

Although the discussion of General Assembly procedures was suspended, the committee

During the afternoon session, the committee turned its attention to the production of its final report due February 16. Committee chair Deborah Block recognized the upcoming “time crunch” of the Advent and Christmas for pastors on the committee in the run-up to its January 22-23 meeting where the document will be assembled.

“I’ve been wondering how much consensus we have about what we’ve learned,” said Wilson, suggesting committee members submit their learnings and findings to the entire group prior to formulating the report, recognizing overlap and unique items will be present.

“We should let our learnings drive our recommendations,” he said of submitting the ideas in writing. “I’d prefer to be thoughtful about that.”

The group acknowledged the work and recommendations of other groups — including the Way Forward Commission and 2020 Vision Team — along with actions taken or proposed by the agencies, create a “moving target” for the All Agency Review Committee’s recommendations.

The next face-to-face meeting of the All Agency Review Committee is January 22-23, 2018 in Louisville. They will meet via conference call October 27 and December 6, 2017.