‘It’s heartbreaking,’ says PC(USA) minister. ‘What does it mean to respond in faith and love?’ 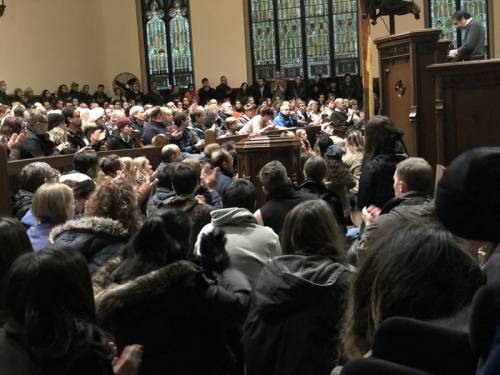 More than 750 people packed into Sixth Presbyterian Church for a prayer vigil following the shooting at Tree of Life Synagogue. Jenny Newman

LOUISVILLE — One of the first things Presbyterian minister the Rev. Susan Rothenberg did once she knew what the “pop, pop, pop” sound was four houses down at the Tree of Life Synagogue in the Squirrel Hill neighborhood of Pittsburgh was to text the Rev. Dr. Vincent Kolb.

“We’ve got to open the church tonight,” she said, referring to her home church, Sixth Presbyterian, which sits at the heart of the Squirrel Hill neighborhood — and across the street from Pittsburgh’s Jewish community center.

By 6 p.m. Saturday, hours after the tragic shooting at Tree of Life, where 11 people were killed and 6 people injured, the community gathered at Sixth to share their shock — and the solidarity of their support.

It started with a vigil inside centered in prayer — a rabbi from a Jewish temple down the street, the executive director of the Islamic center of Pittsburgh and Kolb all spoke — about of how everyone gathered was part of one family. That value, they said, had to be upheld.

At the beginning of the vigil, Kolb, pastor at Sixth Church, asked all the clergy to come forward.

“We sat in the loft together — representatives from the Christian, Muslim and Jewish communities — shoulder to shoulder,” said Rothenberg.  “They said, ‘You were there for us after 9/11.  Now we are here for you.’ ”

After the 25-minute vigil inside the church, those gathered joined more than 2,000 people outside for a candlelight vigil, sponsored by local high school students.

“I’d just gotten home from walking the dog — and then my daughter came down the stairs crying.”

The synagogue shooting reminded his daughter, Charlotte, of the Parkland school shooting which occurred on her birthday. Her classmates were upset, so they organized the outside rally, which was also at Sixth.

Just four months ago Bush had performed a Presbyterian-Jewish joint marriage ceremony with Dan Leger from Dor Hadash, which is one of three Jewish communities that meets at Tree of Life.

“We didn’t find out until [Sunday] who had been killed,” said Bush.  “Sunday morning when we got to shared prayer time I broke down and couldn’t say Dan’s name.”

Bush turned to John Nelson, who had married Nancy Levine — and was one of the morning’s worship leaders to say what Bush couldn’t — that Dan Leger was one of those injured in the synagogue shooting.

“It wasn’t just Dan I was thinking about,” said Bush. “He was doing what every minister would’ve done — trying to stop the life-threatening risk.  When Dan heard the noise, they told me, he ran towards it.”

People of faith and those of no faith find the current level of violence unfathomable.

“We are struggling with how to bring that together and make sense of it. I’m not sure we can,” said the Rev. Dr. J. Herbert Nelson, II, Stated Clerk of the General Assembly of the Presbyterian Church (U.S.A.). “It is a remnant of our past, a remnant of our future and our present if we do not do something to turn this around and learn to love one another.”

“I do believe faith has a chance to be significant at this moment,” Nelson said. “It’s up to all of us to go where people are and more importantly, to believe there is a God of redemption who can do abundantly more with us and for us, than we can do for ourselves.”

Pittsburgh Theological Seminary President David Esterline said he was on an airplane over the Pacific Ocean when the shooting took place. The news came to him via his cellphone after the plane landed in Los Angeles. The first message he returned was to a rabbi friend.

“I wanted to say we are standing in solidarity with you,” he said. “Pittsburgh is not a large place, and over the years the seminary and the Jewish community have had quite a strong relationship.”

Bush and Rothenberg, the two Presbyterian ministers, both spoke of a new awareness of how vulnerable they are.

Rothenberg’s husband, Mitchell, is Jewish. Their children were baptized in the Presbyterian Church, but they still identify as both Presbyterian and Jewish. They chose to live in Squirrel Hill, one of the oldest Jewish neighborhoods in the United States. It’s home to half a dozen synagogues and numerous Presbyterian and Catholic churches.

She told Presbyterian News Service Monday that through her window she saw all of the gathered media and police officers outside her home — those same first responders who had waved her inside on Saturday morning, when she had gone outside to see what the “pop, pop, pop” was all about. Then she’d heard it on the police scanner: We have an active shooter.

“It’s heartbreaking,” said Rothenberg. “If Jews are not safe here, they’re not safe anywhere in this country. What does it mean to be Presbyterian and Jewish? How can we respond in faith and love?”

“We’ve lived in other places,” she said, “but never felt the kind of welcome we feel here. I’m grateful for all the vigils and the Presbyterians who have reached out.”

Kolb was at another large interfaith gathering Sunday night, where he spoke with Pennsylvania Governor Tom Wolf, asking him to do everything in his power to persuade President Donald Trump not to come to Pittsburgh.

“It isn’t in the best interest of our community that is trying to heal for him to come at this time,” said Kolb. “The book of James talks about blessings and cursing coming out of the same mouth. We don’t want our language of uniting to get in the way of the language of inciting — which has also been conveyed by the past president of Tree of Life.”

Kolb said that despite the shock, grief, anger and despair, he takes great consolation that right now, God in Christ, revealed in perfect love, is casting out fear.

He also felt it was important to note that the Muslim community in Pittsburgh has already raised more than $100,000 for Tree of Life and the Jewish community.