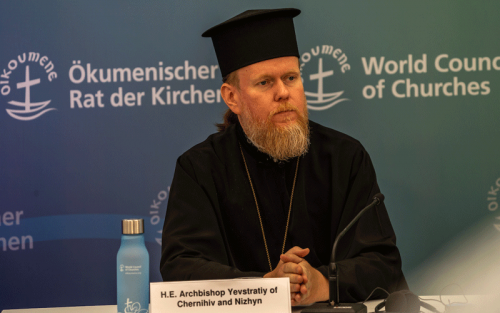 Archbishop Yevstratiy of Chernihiv and Nizhyn from the Orthodox Church of Ukraine speaks with reporters Friday during a World Council of Churches press conference. (Photo by Sean Hawkey for the WCC)

LOUISVILLE — “For more than three centuries, the Russian Empire and the Soviet Union has tried to erase the uniqueness of Ukrainian people,” Archbishop Yevstratiy of Chernihiv and Nizhyn from the Orthodox Church of Ukraine said Friday during a World Council of Churches plenary session. “But we are successfully fighting for our freedom, for our independent future.”

Following Friday’s plenary, Yevstratiy and Dr. Jørgen Skov Sørensen, general secretary of the Conference of European Churches, spoke during a press conference, which can be seen here.

Russia’s invasion of Ukraine “challenges a strong European trust that this part of the world has — or had — developed into a post-war continent of lasting peace,” Sørensen said during the plenary, adding that the Conference of European Churches organized a European pre-assembly in February the day after the Russian invasion. “We listened to voices. We analyzed. We prayed together,” Sørensen said.

The WCC’s 11th Assembly is meeting in Karlsruhe, Germany, through Sept. 8. Nearly two dozen representatives of the Presbyterian Church (U.S.A.) are in attendance.

During the press conference following Friday’s plenary, Archbishop Yevstratiy told reporters the Orthodox Church of Ukraine has applied to join both the WCC and the Conference of European Churches. “I believe we will have good results from our applications,” he said. Ukraine, he reminded reporters gathered both online and in person, has been a Christian nation for more than 1,000 years and has “millions of believers.”

“For those who enjoy peace, I would ask you to do as much as possible to help Ukraine and the Ukrainian people to accomplish a just peace and end this war,” he said.

“Once again,” Sørensen told reporters, “we experience how moving it is to listen to Ukrainian voices, headed by my colleague on my right hand, to hear what is really the situation on the ground.” During the February gathering, “we managed to get voices from Ukraine, online witnesses to what was happening. It was moving. We were crying listening to this.” 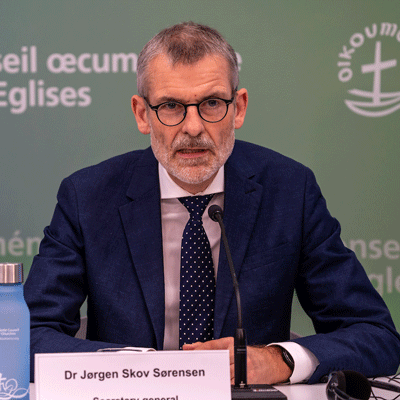 Dr. Jørgen Skov Sørensen, general secretary of the Conference of European Churches, speaks with reporters Friday. (Photo by Sean Hawkey for the World Council of Churches)

Sørensen credited “the efforts and the immediate response we have seen all over Europe from churches to the refugee situation in Europe. It’s amazing to see what has happened and it shows me that the church, as we knew and as we can see again and again, is a strong grassroots network that can mobilize within hours when needed.”

“We have seen member churches taking up this responsibility in a very concrete manner,” Sørensen said, identifying today’s Good Samaritan as “the man or the woman being there catering to the refugees we are seeing in Europe today. There are many responses from the top levels of the churches down to the grassroots level — which are the most significant because they were everywhere taking care of the needs of human beings.”

One important but underpublicized part of the work following the Russian invasion, according to Sørensen, was holding workshops to educate Europeans for whom the church has little importance on the significant role religion plays in Ukraine and in the surrounding region.

“To many Europeans today, religion doesn’t play a role. But it certainly does, and it’s important to address that,” Sørensen said. “We formed together an ecosystem of advocacy and diaconal work addressing the situation in Ukraine as it is today.”

Most of reporters’ questions were directed at Archbishop Yevstratiy. Asked if it was acceptable to have the delegation from the Russian Orthodox Church present for the 11th Assembly, he said that is up to the WCC. “We are gathered here not because we all agree,” he said. “We agree on some matters. We gather to discuss and pray and find a way to be a much more united Christian family than we were before the Assembly. If we take a few steps forward after this Assembly, it will be good we were here.”

“It’s not easy to establish dialogue with someone who totally rejects your own right to exist,” he said of the Russian Orthodox Church, which has remained largely loyal to Russian President Vladimir Putin even after Russia invaded Ukraine. “We are open to dialogue, but not to listen again and again to Russian propaganda.”

There are Russian Orthodox Church officials “who don’t share the official propaganda,” he said. However, “we unfortunately don’t see any kind of real resistance to such aggressive and unjustified behavior of Russia in Ukraine.”

“We believe we as the church of Ukraine bring a real balance to the orthodoxy world,” he said. “We must return orthodoxy to a much more Christian and open way of thinking than Moscow’s.”

Near the end of their time together, the archbishop tried to get reporters to ask one more question of Sørensen. But the Danish church leader waved it off with a smile.

“I started off saying that listening to the voice of Ukraine is of utmost significance,” Sørensen said, “and I’m happy that everyone has heard this message this morning.”