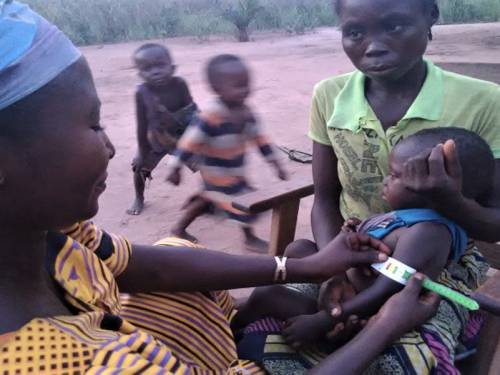 A community health volunteer screens a child with a MUAC (mid upper arm circumference tape) to determine if the child is malnourished. This child is suffering from moderate acute malnutrition and was referred to a health center for follow up by a nurse. Community screening is helping to reduce the prevalence of malnutrition in Nord Ubangi province. (Contributed photo)

LOUISVILLE — When the numbers on a graph showed recently that children are thriving nutritionally in the province of North Ubangi in Northwest Congo, mission co-worker Inge Sthreshley said it made her heart sing. 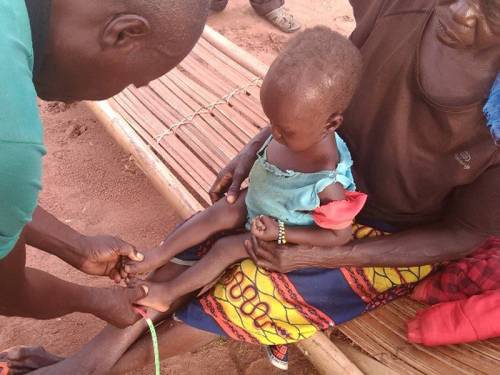 A community health volunteer in Nord Ubangi checks a child for edema in her feet. Swelling in the feet is a sign that the child is malnourished. (Contributed photo)

In a recent letter to supporters, Sthreshley said the information comes from intensive systematic screening carried out by community health volunteers. Each quarter, the volunteers use tapes to measure the arm circumference of every child between 6 months to 5 years of age in each village. In the last year, volunteers completed nearly one million screenings.

This success story is the result of many dedicated people working together.

“Much of the credit for these results goes to the 2,500 plus community health volunteers and the young mothers’ support groups which they have organized,” she said. “They have been sharing information in their villages and neighborhoods on best practices for infant and young child feeding and have been carrying out the screening.

“Other important people are Mr. Papy Lengemo, his team of community animators, Mr. Narcisse Kimbondo, IMA’s nutritionist on staff in Nord Ubangi, and the provincial staff of the national nutrition program (PRONANUT) in Nord Ubangi. They trained the community health volunteers in nutrition education, screening, home gardening and how to carry out home visits to families with malnourished children.” 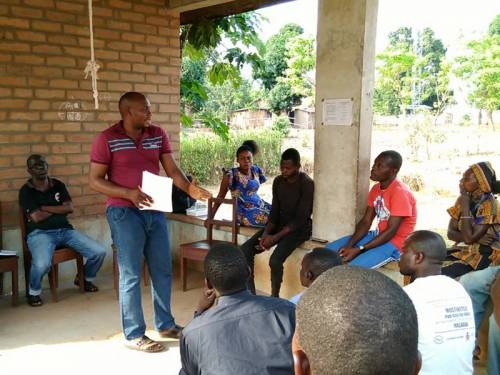 A child of missionaries in Congo and a long-time mission co-worker, Inge Sthreshley works with the ASSR project (a French acronym that means Support to the Health System in DRC)  and also with the Presbyterian Communities of Kinshasa (CPK) and the Congo (CPC) to address problems of malnutrition through education, home gardens and low emission cook stoves.

IMA World Health partners with the Evangelical Community of the Ubangi- Mongala (CEUM) in this small but clearly impactful nutrition program of the ASSR project. ASSR provides support to the health system in Congo through funding from the British government. Papy Lengemo has been overseeing this work for CEUM and has done a great job managing the team, Sthreshley said.

“It’s been a privilege to work with him over these past six years,” said Sthreshley. “Papy’s team consists of 6 to 12 community animators who have been working in the 11 health zones of the Nord Ubangi province. Over these past six years they have been in the health zones almost every month, reinforcing the capacity of the community health volunteers and meeting with community leaders to help them understand why it is important to prevent and treat malnutrition early on and to discuss with them how the community can reduce malnutrition.” 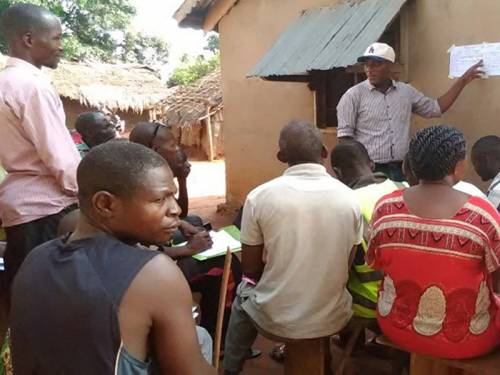 A CEUM community animator meets with community health volunteers to map out screening of children in their community. (Contributed photo)

Sthreshely said she was pleased to learn that the provincial health office in Nord Ubangi had placed a nutritionist in every health zone. Although many were young and inexperienced, the CEUM community animators have helped them understand how to work with the community health volunteers to draw up micro-screening plans and collect and analyze the nutrition data from the screenings and home visits. With the systematic screening results, they can zero in on which areas and villages have the highest malnutrition rates and develop action plans for those areas and follow up to ensure the action plans are implemented. 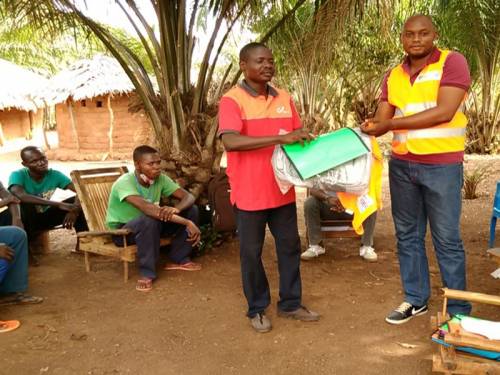 Community health volunteers receive a backpack, folders for storing forms, and an orange vest for visibility in the community. (Contributed photo)

“I also believe that part of the success we have seen in the last year has been due in part to getting MUACS (measuring tapes) into the hands of mothers and teaching them how to use them to screen their own children on a regular basis,” said Sthreshley. “The MUAC bands cost only 19 cents.  As they are color coded, illiterate mothers can ‘read’ the colors even if they cannot read the numbers.”

Although the numbers are still heading in a positive direction, Sthreshley said there is still much work to be done in Nord Ubangi. Based on the population of the area, a proxy relevance rate of 4.6 percent represents an estimated 13,600 children suffering from malnutrition.

“So, we will all continue writing the next chapter — living into this story, bringing the message that malnutrition is preventable, treatable, and beatable,” she said.